The Gunk is a difficult game to talk about. It’s not hard to describe, and it isn’t shocking or disturbing. It won’t make you rethink your life choices. It’s not even a particularly bad game. But it’s also not a particularly good game, either. It’s like one of those totally nondescript, pretty ok days when you think, I’ll never remember today even happened. What was I talking about? Oh, right. The Gunk. See, that’s the problem.

The Gunk is a puzzle-platformer action and exploration game. The emphasis is on exploration instead of combat. Both the puzzles and platforming are pretty easy. They’re not without their charms, though. In fact, there are several appealing aspects to the game, beginning with its opening chapter.

The story starts out strong. A pair of cash-strapped planetary explorers named Rani and Beck drop onto a new world to check out a mysterious radio signal. They fly one of those semi-beat down little spacecraft that is more spit than shine, and they’re hoping to score some valuable minerals or something they can sell. Rani finds piles of pulsing goo the pair name “gunk,” and she hoovers it up with her weapon slash multitool. Clearing the land of the gunk allows it to blossom back into life. It’s a cool moment, the first few times it happens at least. 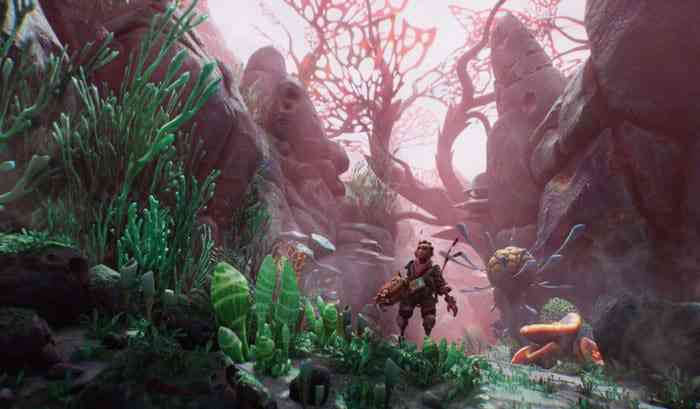 Rani widens her circle of discovery, venturing into caves and tropical-looking forests. She scans interesting plants and rocks and alien life with her tool. She upgrades her multitool with metal bits she’s found, which gives it more range and power. Soon she learns that by combining plant bits and environmental objects like pools, she can grow living platforms. Only an occasionally awkward camera gets in the way of the game’s pretty forgiving platforming.

But Then, Something Happens

Rani also finds artifacts and statues, and you can probably guess that part of the game is trying to piece together the mystery of the lost civilization. Rani and Beck are in near constant contact. Their conversations are pleasant and affable but pretty uninteresting, though a rift between them grows. Mostly Beck warns Rani to be careful, and Rani exclaims that she’s found something. Every once in a while, Rani has to use her gun tool to manipulate the environment to solve a puzzle. She also has a few combat encounters, including some easy bosses. As a side note, it seems at odds with the game’s obvious family-friendly vibe that there is a sprinkling of PG-13 level profanity. 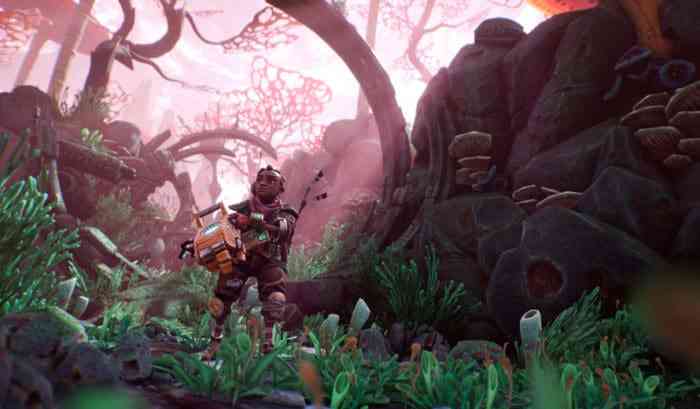 Although the story develops a bit during its 6 or so hours (give or take), after a certain point the gameplay stops changing in a meaningful way. Despite weapon and tool upgrades and a few changes in scenery, the loop settles into an unchanging groove. Rani and Beck argue, and their conflicting views of exploitation and resource management might hint at a larger theme. There isn’t much real drama.

As tepid as the overall game concept might be, there is some fun to be had exploring and puzzle solving. It’s all pretty effortless, which makes for some chill gameplay, for a while. Using the multitool to suck up the Gunk is sort of satisfying, though maybe less and less so as time goes on. Nobody wants to play a bad game, but playing The Gunk you kind of wish the developer had taken a few more big swings.

So here’s the question: is it better to make a safe game that succeeds, or a risky, ambitious game that doesn’t? Yeah, I don’t know the answer, either.

Does this Seem Familiar?

The Gunk’s vision of an alien world is day-glow colorful and filled with flora and fauna that look like they should be growing deep in the ocean. The contrast between the brown-gray parasitic Gunk and the living planet is effective, but the environments are also fairly repetitive. Since there is no map, this leads to some aimless wandering. There are some artistically attractive scenes out in the world, but little that is awe-inspiring or truly new.

Rani and Beck are pretty primitively rendered and move in a way that suggests marionettes. There’s a bit of a disconnect between the generally well-voiced dialogue and the awkward lip syncing and facial immobility of the characters. I’m not certain if this was an artistic choice or budgetary reality imposing its will. Methinks the latter. 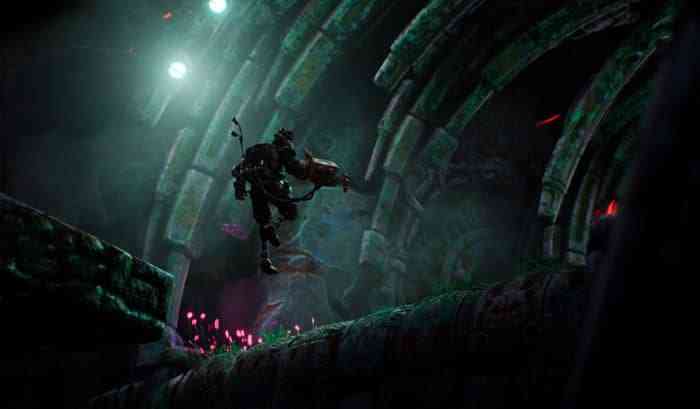 The Gunk is a competent product, but it feels very risk-adverse and derivative. You’ve seen and played elements of this game before. It can be fun for a while, but you soon realize that The Gunk has a limited vocabulary and spends too much of its time amicably repeating itself. Instead of being the foundation for something grander, The Gunk is satisfied to make its exploration and simple mechanics the entire game. As a Game Pass product, however, it’s not hard to cautiously recommend The Gunk as a pleasant enough diversion.