Menial tasks and harsh fluorescent lights, the monotony of office work can be a grind. Looking to smash through the cubical is The Company Man, an action platformer that pits you against departments of a large corporation. With your co-workers and line managers in your way, will you be able to fight the power structure and come face to face with the CEO?

As Jim, a new employee at a gigantic business, you must work your way up from the bottom rung of the corporate ladder in order to achieve your dream to become the CEO. Each level focuses on a specific department in the spectrum and is smothered with a healthy dollop of satire.

Inhabiting levels are a myriad of office workers that you must vanquish in order to proceed. You will need to decipher enemy attack and movement patterns and counter accordingly. Each character type varies and offers a suitable level of challenge, especially when facing several at once. Armed with a keyboard and emails, you are able to use close quarters and ranged combat to overcome your co-workers.

This Is Where I Excel

Platform segments intersperse levels, requiring you to zip past hazardous obstacles. Although this helps to diversify the experience, the implementation is quite simple. Leaning heavily on its influences, these segments follow trends that are present in most action-platformers. With its innovative premise and stellar presentation, it would have been great to see more stationary-based threats rather than the conventional spikes and blocks.

Backgrounds and obstacles consist of exaggerated office-based manifestations that add variety to each level. As The Company Man has you escalating a tower block, there was a danger of floors feeling too familiar, however, each area is distinct due to the fantastic art direction that permeates the game. Levels develop, adding new elements that link to the concept of the floor. While it doesn’t reach its full potential, it spawns some new gameplay elements; one of which adds small puzzles that task you with warping through televisions to advance. 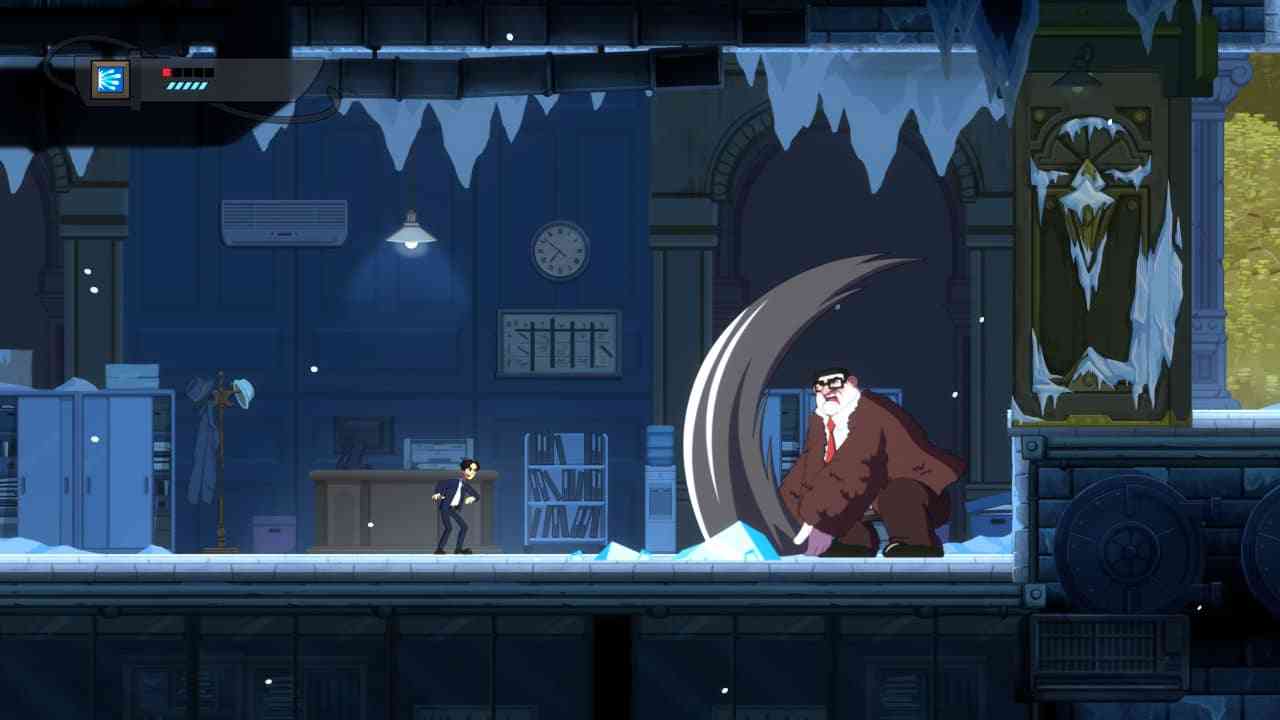 Levels culminate with well-designed boss battles. Often large and imposing, these fights will require you to use all your skills to overcome your foe. With the ability to dash, you will need to avoid the barrage of attacks and patiently wait for your window of opportunity. As you surge up the floors, you’ll gain new abilities that will aid you in battles. You can purchase standard items such as additional health and stamina, however, you can also acquire gameplay-altering upgrades such as the ability to destroy incoming missiles with a melee attack. Completing levels will give you an additional range-based weapon that is in the style of a traditional gun but with an office-themed twist. This allows you to personalize your playstyle and experiment with methods to overcome the cast of zany characters who are intent on your demise.

Time For A Break

Dotted throughout areas are coffee machines that act as a health replenishment station and a checkpoint. These are generously positioned during the first few floors and become quite sparse in the latter third of the game. This can be quite frustrating as it’s at these points where you encounter tedious gauntlet sections which will send you way back if you fail. Whilst this does add a bit more challenge to later segments, the final few bosses are quite easy which is jarring. 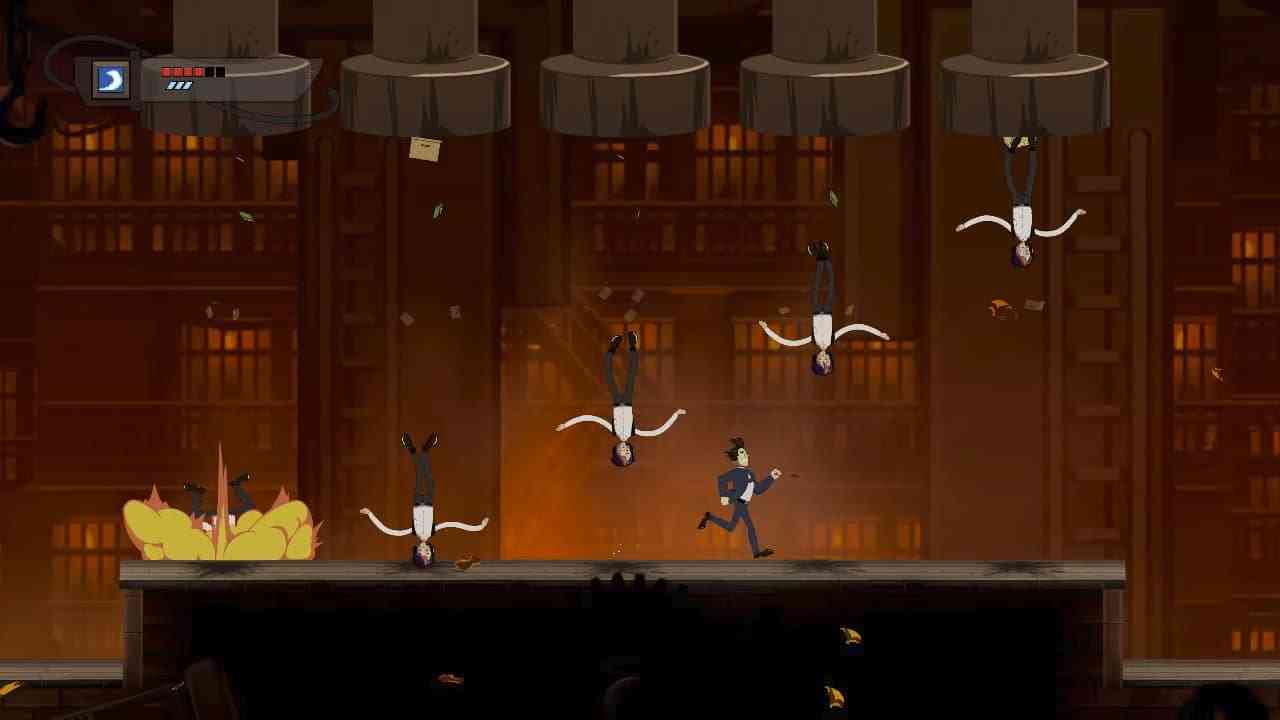 The personality in The Company Man is a highlight of the game. Animations are packed with minor details that add a Cartoon Network-like quality to characters. The relatable suited protagonist scurries across the terrain in a hilarious manner that is reminiscent of Hanna-Barbera cartoons. Influences of the medium are clear, and help the game to carve its own identity within a crowded genre. This washes through the entirety of the game, even down to its Charlie Brown-esque nonsensical muttering which replaces the dialogue. Even with the lack of verbal communication, the game maintains a strong sense of humor due to its art direction, title cards and physicality.

Clocking in at around 4-hours, the game is rather short and doesn’t have any real incentive for replay. There are other difficulty options but not much else. Due to this, I can’t imagine many people revisiting the office after hours.

The Company Man is a beautiful action platformer that is crammed with character. Forust Studio has laced the game with social commentary that truly enhances the experience. Even though it has a few pacing issues and lacks replay value, this is an enjoyable fight against capitalism. 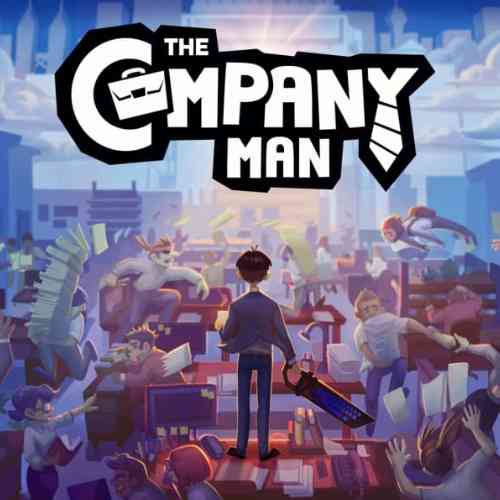