Demoniaca: Everlasting Night is a frustrating game to review. It’s got gorgeous sprite work that channels the aesthetic of Symphony of the Night-era Castlevania, but its soundtrack draws on rock and metal. It’s a Metroidvania with the combat system of a hack-and-slash game and the difficulty of a Soulslike. There are a hundred things I love about it, but the things I hate are serious problems. In short, it’s a game that’s almost as frustrating as it is fun, which makes for a very unique gameplay experience. And I haven’t even touched on the title’s mature content yet.

A clan of ancestral demons is trying to build a new Tower of Babel. This leads them to sacrifice an entire village, but one girl survives. Demonic blood now flows through her veins, but this corruption gives her a terrible power. Sewing her mangled body back together, she sets off on a journey to avenge her brothers. This quest will lead her into a world of blood and violence and force her to face her own true nature. All of this setup is conveyed in the game’s opening text scroll and a few well-chosen, visceral images. Then you enter the Tower and things start getting really wild.

You soon meet a number of strange and off-putting characters on your quest for revenge, including the mysterious Boxman, an enigmatic girl called Klin, and a deeply unsettling woman known as Crow. It becomes clear that Crow has twisted plans for you, separate from the demons that destroyed your home. However, you may have to accept this if you intend to stop the apocalyptic ritual known as the “Everlasting Night.”

Demoniaca: Everlasting Night’s hard rock and pixel art aesthetic is very striking. It combines a nostalgic retro beat ‘em up flavor with the look of an 80s or 90s metal album cover. Lush sprite work and detailed pixel art portraits lend this game a sense of vivid life. However, it can get pretty explicit at times. Viewer discretion is definitely advised. That aside, the soundtrack is fantastic. Even if you aren’t interested in the game, I recommended checking out the songs. The game’s overall aesthetic combines the feel of an exploitation film with the kind of outlandish imagery you might find airbrushed on a van.

While the visuals and world design are somewhat reminiscent of Castlevania, the gameplay leans heavily on combos and looting. This isn’t always a bad thing, but it is a noticeable one. I often found myself skimming over the gorgeous environments because I was too busy thinking about inventory management. Or, even worse, because there were four monsters in one screen and I just couldn’t deal with that. I compare Demoniaca: Everlasting Night to a Soulslike repeatedly in this review, and there’s a good reason for that. The game provides two difficulty modes, Classic mode and Easy mode. Be warned: Classic is brutal, but even Easy mode can wipe out the unwary. 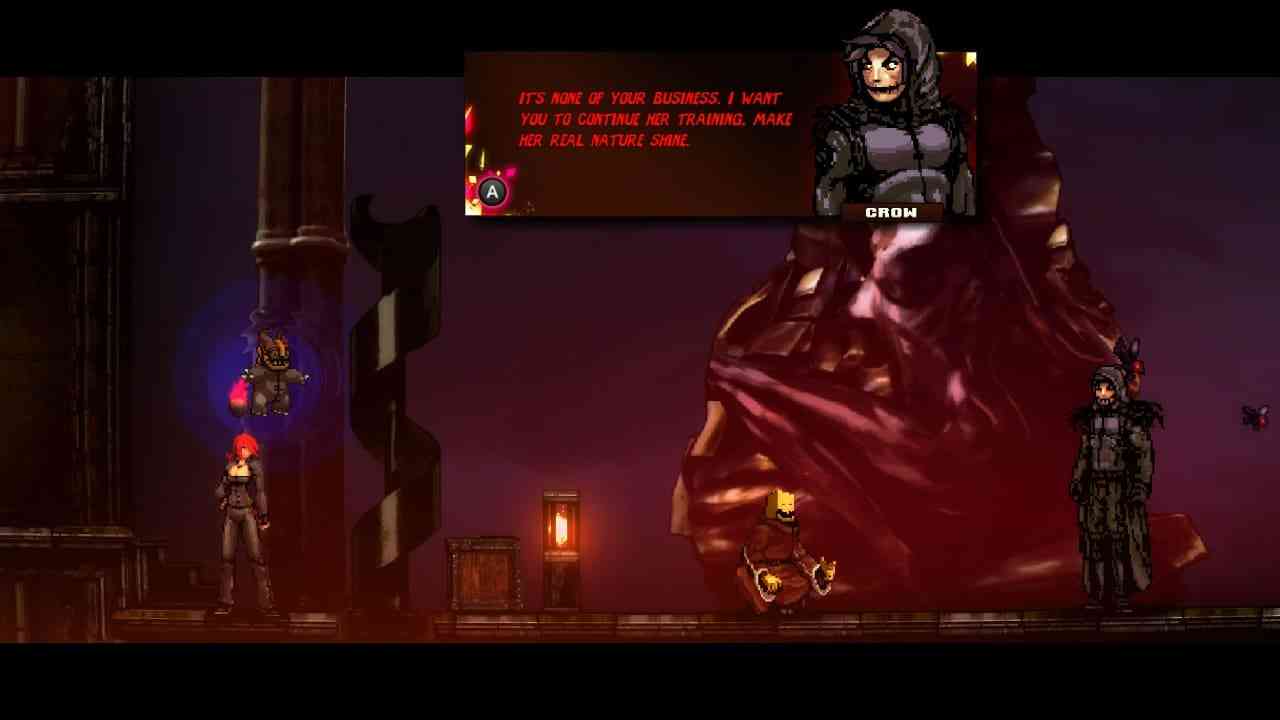 The game features a deep and complex combat system that takes heavy inspiration from the beat ’em up and hack-and-slash genres. There’s gore everywhere, plenty of monsters will afflict you with nasty status effects, and there’s a constant stream of new enemy types. You can check the command list from the pause menu and I suggest you do so regularly. It can be really hard to remember the available moves, which is a real pain since most monsters have specific weaknesses. Things get better and worse as you unlock new moves. Not only is it really hard to tell what a given monster will be weak to, but the early confusion can also cost you your life.

I definitely recommend starting on Easy mode if you want to explore the game’s lushly detailed world. Save Classic mode for when you’re feeling particularly masochistic. No matter which mode you’re playing on, save often. Move carefully. And above anything else, use your damn health potions. You’ll pick up more later. 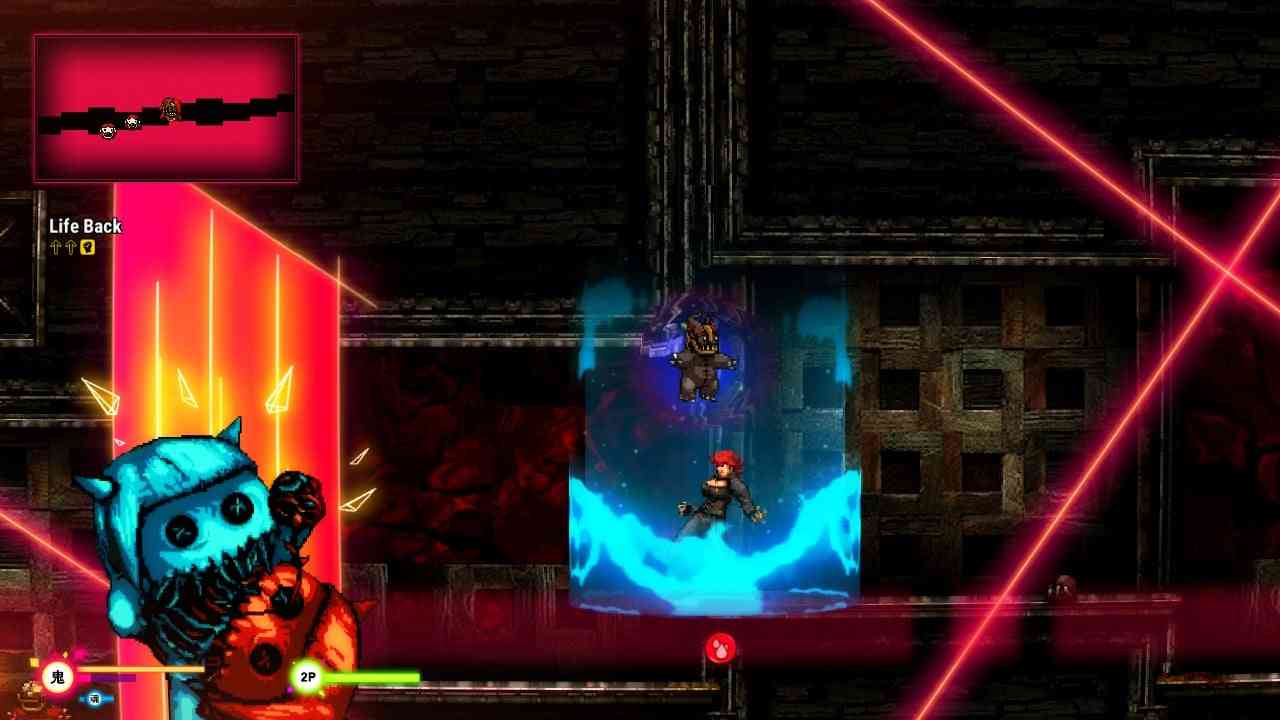 Demoniaca: Everlasting Night strikes a fine balance between fast-paced action and carefully calculated strategy. Unfortunately, the game’s focus on high-stakes platforming often drops you down 20 stories and into battles you were trying to avoid. Like many retro games, Demoniaca: Everlasting Night features complicated multi-stage boss fights. However, the real enemy is environmental hazards. It’s easy to get stuck in a loop if your damage animation gets triggered.

Too Ambitious For Its Own Good

Speaking of environmental hazards, the game’s heavy focus on platforming can be a real nightmare, especially if you experience joy-con drift. Most levels require you to wall jump around 50 times to get where you’re going. If you don’t enjoy that then you probably won’t enjoy the game. I spent half my time retracing my steps after dying at an unfortunate moment. The game’s combat system and hidden secrets provide lots of replay value, but having to climb across an entire area–or worse, two–just to get back where you started isn’t fun.

If you have a poor sense of direction, you can find yourself stepping on the same mines over and over. This makes the minimap the most important tool in the game. Unfortunately, the game doesn’t pause when you’re in the item menu. That’s bad enough, but it also doesn’t pause while you’re using an item. Including the teleportation items. In other words, you can be killed even while trying to teleport to safety. Thanks, I hate it. 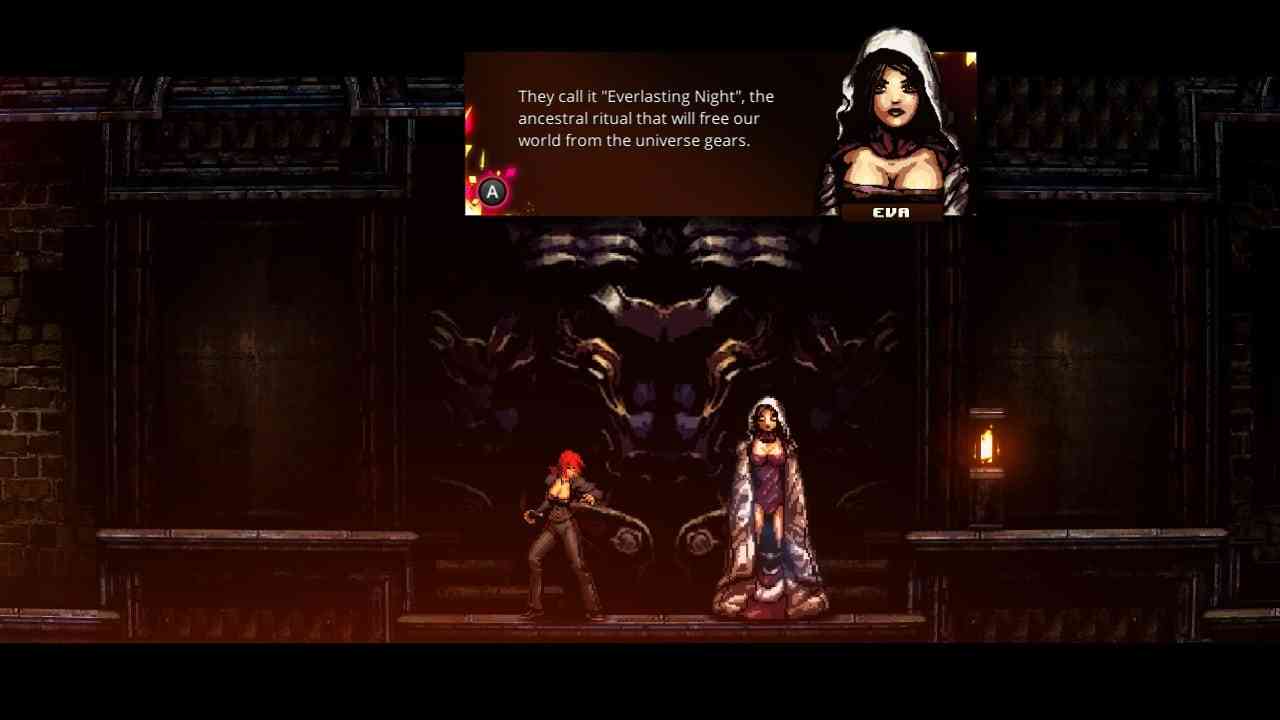 Demoniaca: Everlasting Night is a potent combination of gameplay genres that left me constantly wanting more. Specifically, it left me constantly wanting more shortcuts and methods of fast travel. This is because the game’s main weakness is its Metroidvania elements, especially the exploration. The Tower of Babel is a fascinating place, full of secrets and hidden locations. However, it’s really hard to enjoy that when the game’s difficulty is set to Bloodborne levels. The loading screens are also pretty long.

All in all, Demoniaca: Everlasting Night is a heavily flawed game, but still very enjoyable. Just make sure you know what you’re getting into with both the game’s mature content and its platforming elements. 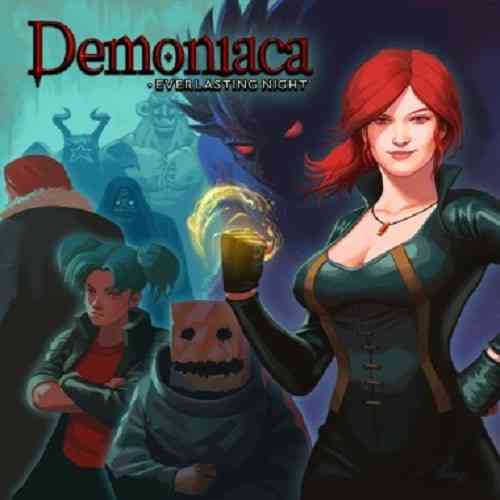