Simply put, Superliminal is its own game that does its own things very well. If that sounds like I’m protesting too much, it’s because of the similarities it shares with one of the most famous, and arguably one of the best games of all time: Portal. I was distracted by the similarities at first, but as I went through Superliminal’s experiments, I started to see all these little touches. I wasn’t crazy for seeing a lot of inspiration from Valve’s magnum opus but hey, if you are going to steal, steal from the best.

On its own merits though, Superliminal is a first-person puzzle game which is utterly unique and at times, mindblowing. In Superliminal, you must go from puzzle to puzzle, solving problems of perspective. Your main ability is to change the size of objects. Place something on the floor, move close to it, and pick it up; it will magically become the size it appears to be. But walk very far away until that object is a speck in the distance and pick it up again. Now it will be in your hands, and actually the size it appears to be.

It’s trippy stuff, and the puzzles are great. You’ll get the hang of turning regular objects like chess pieces and wooden blocks into weights, platforms, ramps, and barriers, which you will need to navigate. Eventually you’ll get into a rhythm. You’ll know if you want the object to be bigger or smaller, and you’ll move closer or farther in almost automatically. It’s a great gameplay concept, and one I’ve never seen before. Simply put, it plays great.

As you progress, you’ll encounter other types of puzzles. Sometimes an object will be spray painted on multiple surfaces, and you’ll need to align them just so to make the full picture, will which pop those objects into reality. The game also likes to play with illusions, making rooms the wrong size, or simply paintings on the wall. Sometimes it’ll play with the rules of video games themselves. I was constantly surprised, often challenged, and rarely frustrated. That’s the mark of a great puzzle game!

But why are you in a world of size-changing impediments? Well, as the game establishes, you are participating in an experiment regarding dreams. The details of the experiment are never made clear, but the game obeys dream logic because your dreams are being altered. That’s neat but unfortunately, this manifests in familiar ways. You are guided through experiment rooms (for expediency, perhaps we’ll call them “test chambers”) that follow a theme. Eventually, you’ll discover areas beyond the test chambers that you weren’t meant to explore. You know this because you are guided by a calm but somewhat menacing female voice. Sometimes, you’ll find boom boxes with recordings of a curmudgeonly male scientist dictating his research process.

It’s all fine, but it’s a bit hard to overlook the similarities. This guy isn’t as memorable as Cave Johnson. The puzzles themselves are fabulous, but the environment isn’t as immersive and mysterious as Aperture Science. The voice is certainly not GLADOS. I feel in my bones that if those things didn’t exist, I would be hailing Superliminal as a sublimely original work and a rousing success. The story, writing, and environment design aren’t bad. They’re just not Portal, even though they are very close. 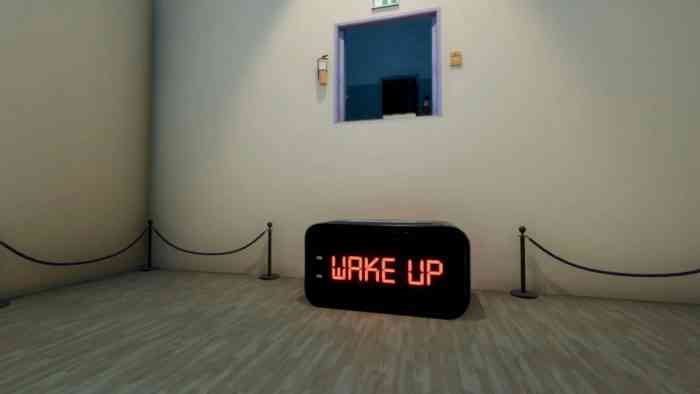 There’s also an occasional design sloppiness that reminds you this game was made by a cool indie team and not one of the wealthiest organizations in the game industry. You know that feeling when you walk around a game and find unopenable doors? There is a lot of that. Both because there are unopenable doors, but also because there’s no logic as to the items you can and can’t pick up and alter the size of. Why can I pick up a piece of cheese, but not a coffee cup? Why can I remove some doors from their hinges, and not others? Sometimes there’s a feeling of wasted opportunity. And sometimes the game is genuinely confusing. It’s never enough to make you stop in your tracks, but it is enough to slow you down on occasion.

But that being said: wow. An original gameplay mechanic is hard to come by, and these shapeshifting puzzles feel like nothing else. The parts of the game that are derivative aren’t bad, just second best. The parts of the game that are original are extraordinary. And which aspect is more important? Though it may be cliché to say it, Superliminal is more than the sum of its parts. It’s a clever game and the more I play it, the more I think about it, and the more I love it. That’s worth a whole lot.


Portal ‘Demake’ Will Find a Home on the Nintendo 64

Portal: Companion Collection Is Coming to Switch Later This Year