Twenty-four years ago to the day, Romancing SaGa 3 was released for the Super Famicom in Japan. It’s one of the games developed by Square during its championship reign for the Super Nintendo, that included hits like Final Fantasy VI, Chrono Trigger, Secret Of Mana, and Super Mario RPG. Square developed three Romancing SaGa games for the Super Famicom, and none were brought over to the West. We did get a trilogy of games that preceded the Romancing SaGa one, in the form of Final Fantasy Legends I, II, and III for the Gameboy, which were in turn spiritual successors to Final Fantasy II for the Famicom, which also wasn’t released in North America until the PS1. Whew! Romancing SaGa 3 is the best of the six games, and features full 1995 Square production values. But does it hold up in today’s gaming climate? Better than you would think!

Video game reviewers tend to be suckers for open-world games. I’ve noticed a trend where lots of major sites tend to ignore game flaws if they’ve created a masterful open world *cough Red Dead Redemption 2*. Well, the SaGa series is one of the progenitors of the open-world RPG. Unlike Final Fantasy or Dragon Quest, Romancing SaGa lets the player choose between one of several characters, and plops them right in the middle of a fully realized 16-bit fantasy world. There is a story, but less direction than usual is given about where to go and what to do. The player is given the opportunity to explore, live in, and enjoy Romancing SaGa’s world, while still being driven by a compelling plot.

As a very plot-driven player, I was very pleased to find out that this open-world JRPG had such a fascinating one. Every 300 years a solar eclipse happens where everyone who is born during it is destined to die before it’s over. The one child who survived became an evil force called the Archfiend, who opened four abyss gates, and unleashed four demon lords. Then another child survived another eclipse, and with the aid of her allies she conquered the Archfiend. It has been 20 years since the last eclipse, and the game asks if your chosen hero will be a force for light or darkness, and the story of that hero unfolds. There’s a lot of replayability in the game, as each character has their own perspective on the events of the overall story, and can make their own choices. 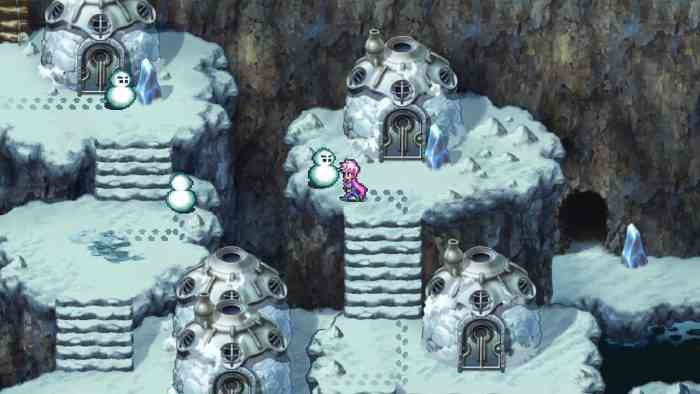 Gameplay isn’t the usual Square ATB system. It’s turn-based combat, where the player selects all actions, then the Speed stat determines the order of attackers. Combat involves a party of five characters, and their positioning determines whether or not special attacks can be performed. Player position also determines how much damage is dealt and taken. There’s also a tactics-like combat feature that is first introduced if the player starts with Mikhail. This reminds me of the larger scale battles found in the Suikoden games, and is a fun diversion from regular combat.

Leveling up isn’t traditional either. Stats increase based on their use. So if the player only attacks, only their strength stat will increase. Magic has to be used for it to level up, and damage must be taken for HP to increase. I don’t enjoy this as much as traditional leveling up, but it’s an interesting departure from the norm. Every now and then a lightbulb will appear above a character’s head, and they will learn a new move. 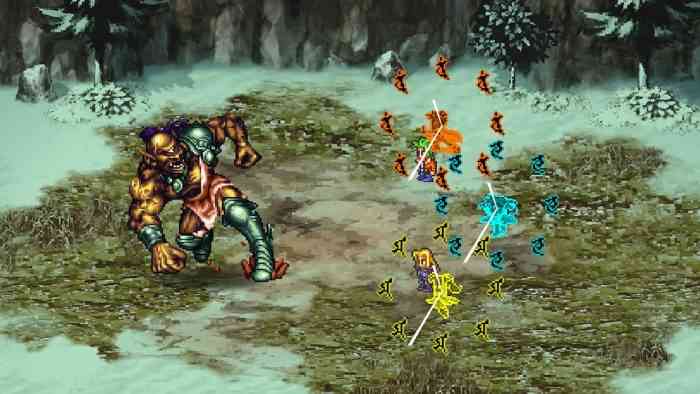 Romancing SaGa 3 is gorgeous! It was one of the best-looking games for the Super Famicom, and is enhanced further for modern systems, with widescreen and HD support. The backgrounds are incredibly detailed, and are much better than anything that could have been made for the Super Nintendo. They have a faux 16-bit appearance. The character sprites, however, have been largely unchanged, and aside from some animations on larger enemies, this is a 16-bit presentation that rivals Final Fantasy VI. And the music is as catchy and appropriate for the game setting as anything Square produced during its heyday.

There are a few extra features in this HD remaster, aside from the graphical and sound quality upgrades. There’s an option to include a bonus dungeon, which is recommended, and there’s a New Game + Mode, which combined with all 8 character choices, makes for incredible replay value.

With all of these upgrades and extra content on top of an already rock-solid game, picking up Romancing SaGa 3 for many is a no brainer. Granted, the combat and leveling up might not be for everyone, but if you are a fan of Western and Japanese RPGs I highly recommend jumping into this classic that took way too long to make its way out west.