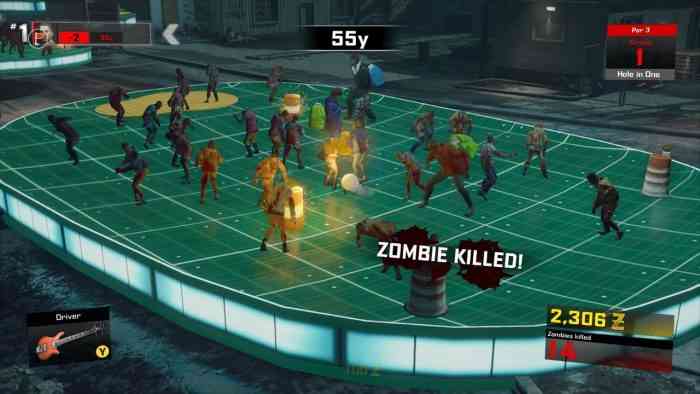 Super Ultra Dead Rising 4 Mini Golf is not your standard mini golf fare. Beyond the standard putting (which is generally all mini golf offers), you’ll also have a wedge and a driver to cover larger distances. Each of the six courses (comprised of different Dead Rising 4 campaign locations) has only four holes. Each hole is laid out across various green platforms hovering off the ground. You’ll have to drive, chip and putt your way from the tee to the hole, no different than standard golf. However, if your ball doesn’t land on one of the green platforms, you get an automatic “out of bounds”. The greens are occupied by Zenny coins (that you’ll collect to purchase customization items), zombies (which will earn you Zenny for killing), explosive barrels, and (in multiplayer modes) “Ball Buster” items. On some holes, there will be little speed booster areas that will zip your ball at a fast speed in a specific direction. There are also pipes that you can try and hit your ball through, which usually provide shortcuts to the hole. But the biggest obstacle will be your own skills, and whether you can time your button presses correctly. Dead Rising 4 Mini Golf uses the video game golf standard of three button press swinging – press once, the meter starts to go, press again to decide the distance, then press a third time within a green “sweet spot” to earn a perfect shot. If you press the button outside the sweet spot you’ll end up slicing your ball – usually resulting in an out-of-bounds.

But the biggest obstacle will be your own skills, and whether you can time your button presses correctly.

Dead Rising 4 Mini Golf only provides four different characters to choose from, each wearing their own Exo suit, who you’ll recognize from the main game (though, it would have been nice if there were a few more characters to choose from, just for the sake of variety). There are a number of ways to customize your characters using your Zenny money, such as Exo suit colours, different helmets, and different golf balls. The different golf balls have different environmental effects (fire, ice, poison) which will effect zombies when they’re struck. You’ll also be able to upgrade your golf clubs. Upgraded golf clubs are the only way to improve your character, so it’s ideal to focus your money on that first – unless you really need that gold Exo suit! 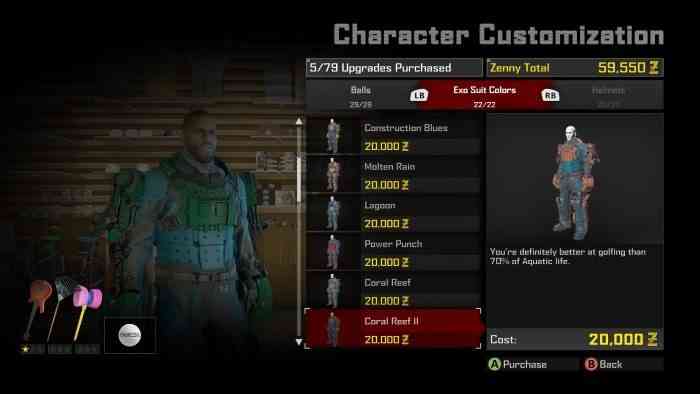 Playing with your clubs alone is rarely fun, that’s why Dead Rising 4 Mini Golf offers a local multiplayer mode and an online multiplayer mode. I gave the online multiplayer mode a try and it worked pretty well! You have access to the same six courses that are offered in the single-player mode, and the golfing plays pretty much the same, save for two distinct differences. Zenny coins and zombies are first come, first serve – if you get them first, your opponents won’t get them. Whoever is up first usually has the benefit of being rewarded with more money and kills than the other players. However, the biggest difference between playing with yourself and golfing with others is the addition of the Ball Buster items. Hit a floating Ball Buster icon, and a spinner appears on screen with your opponents faces on it. If the spinning arrow lands on your opponents face, they’ll have to deal with one of a handful of handicaps for their next turn. These handicaps range from a faster swing meter to the loss of the shot preview. After four holes, a winner is declared, and you’ll be given the option to play the next course or return to the lobby. The one thing my friends and I noticed while playing online was how slow the games felt; because we were alternating turns, watching each shot (no skipping or fast forwarding) and couldn’t help but think the game might benefit from allowing everyone to golf simultaneously. Granted, this might affect how the Ball Busters worked, but it would have made the matches a bit quicker and more exciting.

“See Bob, you want to combine Par with Carnage. I call it… Parnage”

The developers probably didn’t put much focus into the visual aspects of the game, aside from adding the greens. Often the characters would clip into the world as if their feet were swallowed by the greens. Zombies would stutter around in a spastic, non-zombie way. And during multiplayer, certain things would just seem out-of-place, like the ball flying well before the character finished their swing animation. None of this is a deal breaker, more of an observation. The music in this mode is ripped directly from classic Capcom games; even some of my favourite gaming tracks are in here – like the prologue level in Mega Man X and Guile’s Theme from Street Fighter II. This mode also includes play-by-play commentary by our Dead Rising 4 hero, Frank West (and his zombie co-host, Bob). I didn’t find the commentary as funny as Frank’s comments in the main Dead Rising 4 campaign, but there were some highlights like “See Bob, you want to combine Par with Carnage. I call it… Parnage”. Bob’s contributions are limited to the occasional grunt. 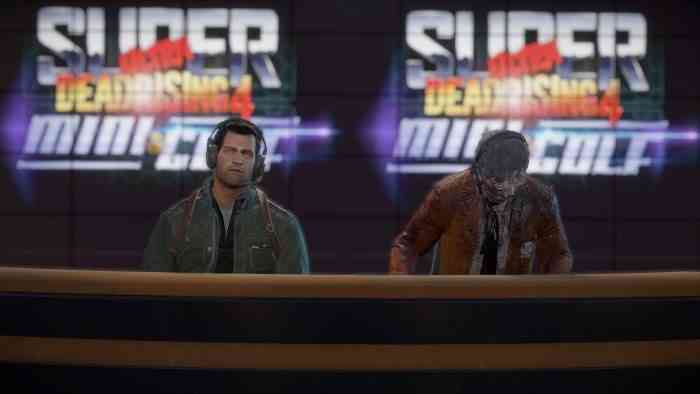 Dead Rising 4: Super Ultra Dead Rising 4 Mini Golf DLC provides players with a completely unique and off-beat variation to mini golf with a fun Dead Rising twist. There isn’t a ton of courses here (six in total, each with four holes) and only four characters to customize, I’m really hoping Capcom Vancouver offers us a free update at some point to increase the content. There is a “Trials” section that provides players with some challenges to complete and there are achievements to unlock to help stretch the DLC’s value. This mode is obviously better when playing against others, as the single player component doesn’t even offer a computer player to play against. I was pretty critical of the last piece of DLC, Frank Rising, because I felt it was an unnecessary cash-in that should have been included with the main game (or at least offered as a free update). However, Dead Rising 4 Mini Golf is actually a fun little add-on that adds good content to the Dead Rising 4 package. If you’ll only be playing this mode alone, don’t bother. If you have a group of friends playing Dead Rising 4 that are willing to purchase this DLC, then I’d say go for it! 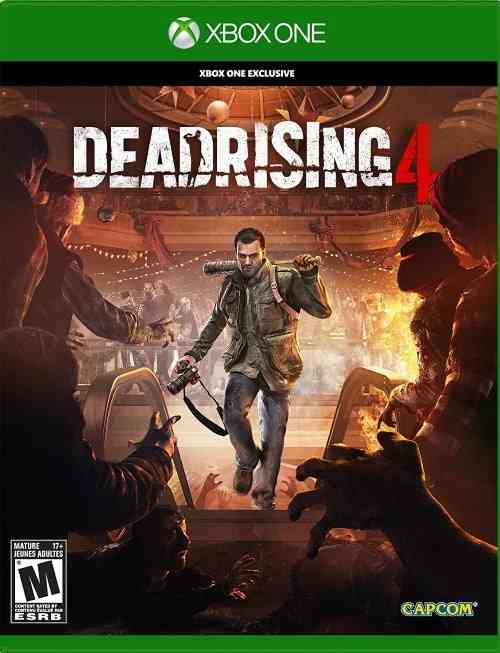