EDITOR’S NOTE: We’re giving away a PC copy and a PS4 copy of the game. Be sure to enter!

STREET FIGHTER V GIVE AWAY!

Street Fighter V is a tricky game to review. On the one hand, it is arguably the best fighting game of all-time, gameplay-wise. On the other hand it is extremely lite on features, but promises loads of content in the future. Should it be reviewed as an incomplete product, or an evolving one? This review is going to offer a score based on what will be included when Street Fighter V can be purchased for $70 on February 16th 2016. I will also highlight what is to come, and if need be, COGconnected will keep readers updated of changes to the product, and if necessary adjust review scores.

Remember in that first paragraph where I stated that Street Fighter V was arguably the best fighting game of all-time, gameplay-wise? Well, I wasn’t joking; V is the clear evolution of IV which it looks and plays like a slightly slicker version of. The 2D-plane of the last generation of fighters is back, and the traditional light, medium, and strong punches and kicks are back, along with back blocking, throws, combos, and all the other gameplay elements that have made the Street Fighter series what it is.

The Ex Meter returns from Street Fighter III, which builds as your character receives damage, and is used to power up special moves or Critical Arts (epic combos). New to the series is a meter called the V-Gauge, which fills as you take damage. This gauge leads to the addition of three new techniques: V-Skills, V-Reversals, and V-Triggers. V-Skills are special moves such as parrying or attack reflection. V-Reversals allow each character to perform a counter. V-Triggers use the entire gauge, and are special skills such as increased attack power, or extra hits.

“Street Fighter V is the clear evolution of IV.”

There are 16 fighters to be found right off the bat. Ryu, Ken, Chun-Li, Zangief, Dhalsim, M. Bison, Vega, and Cammy all return from the Street Fighter II generation, and Nash (Charlie), Birdie, R. Mika, and Karin all return from the Alpha generation. There are 4 new characters: Necalli, Rashid, Laura, and F.A.N.G and I really liked using all of them. I was extremely underwhelmed by all of the characters that were new to Street Fighter IV, when it first came out, and Capcom really upped their game in terms of new character design. I also love the updated character designs for classic fighters! Some have mild tweaks, such as Bison with his long coat, or Vega with his puffy shirt, and others are more extreme, like Ken’s half-pony/wetsuit shirt, or Nash’s Franken-face. I was skeptical about some of them going in, but seriously, every character looks great!

Unfortunately, 16 fighters is all you get out of the box. I’m a fan of lots of characters, coming from the Marvel Vs. Capcom 2 school of “lots of choices of who to fight with make for a more fun experience”. After loving the selection of fighters in Super Smash Bros. Wii U, and feeling like Mortal Kombat X spent too much time “tournament balancing” which meant less fighters, I found Street Fighter V to be too far in the Mortal Kombat X direction of less fighters. 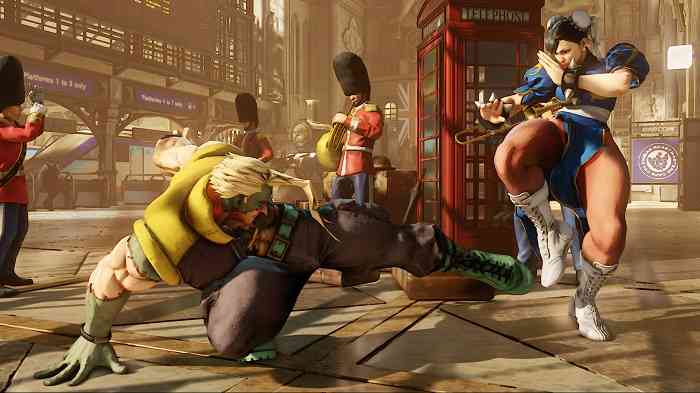 There are 6 fighters which will be released over the course of 2016: Alex, Guile, Balrog, Ibuki, Juri, and Urien, which only leaves out Honda, Blanka, and Sagat from the classic roster  which are likely to be found in some yet to be disclosed DLC, you can count on it. Some of the Story Mode cutscenes use other characters from the franchise, so hopefully we will get to see more of the classic fighters become useable over time, which is apparently Capcom’s intention.

In terms of gameplay options, the meat of what you get with Street Fighter V is online play. It’s possible to compete in matches that increase your online ranking, as well as casual matches, which do not. There is also a Battle Lounge for players to compete in invite-only matches against their friends. There is a Story Mode in the game, but it is very simplistic and brief; each character’s story is only around 3 fights long, with about 5 minutes of cutscenes. The cutscenes are made up of static art panels, and while I appreciate the attempt at adding a richer story, Street Fighter V is a AAA title, and the cutscenes make it feel more like an indie title. The Story Mode we have promises to be a prologue to a yet-to-be-introduced game feature, which I will cover in the “upcoming content” paragraph of this review.

“…Capcom promises that players will have access to all future content for free, including characters, balancing, and gameplay updates.”

Capcom’s Street Fighter IV model was to release massive updates to the game every couple of years, which included new characters, fighter balancing, new features, etc. Capcom has introduced a new model in Street Fighter V, where updates will never need to be bought. Instead, purchases can be made by using Fight Money, which is earned in-game by levelling up characters and competing in Daily Challenges (which do not start until March), or by using Zenny (real world money). We’ve seen this model used and abused before, but Capcom promises that players will have access to all future content for free, including characters, balancing, and gameplay updates. Unfortunately, at this time we cannot tell if how much fight money will be needed to unlock content. Hopefully Capcom is using the Zenny option only as a bonus, and not to make Street Fighter V a $70 freemium game.

The framerate is slick, and the game plays wonderfully, but because of the art style, Street Fighter V doesn’t look much different or much better than Street Fighter IV. The music, however, is incredible! There are several tracks that mix classical score with electronic and dubstep to excellent effect, and the menu has a great djenty prog metal track that I got excited to hear every time it came on! It felt like playing Street Fighter II again, where I would choose Ken’s level just to hear the great music! 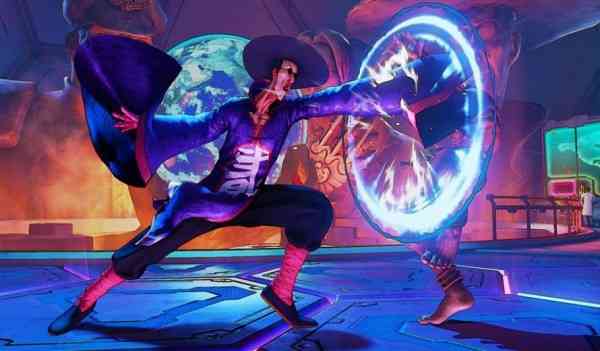 And this one gets its own paragraph: Capcom has promised that PS3 fight sticks are fully compatible with this PS4 version!

The Story Mode that can be played upon launch is leading up to a “Cinematic Story Mode” coming June 2016. Capcom also promises that the Battle Lounge will be expanded after launch. There will also be a Spectator Mode added, as well as a Challenge Mode, which will open with “Tips” and “Trials”, and more challenges to be added later. There will also be Daily Challenges beginning in March, to encourage players to fire up their consoles every day.

So much is being added after launch, that I feel like in a lot of ways, I’m reviewing an incomplete game. I cannot review what is yet to arrive. In the same breath I can clearly tell that what we’re seeing now is the base for an absolutely stellar overall experience. Trust that Capcom will be following through on their promises and only making better what is already technically fantastic. COGconnected will keep you updated as more features are added. If you are a Street Fighter fan, and are looking forward to seriously competing in this console generation’s great fighting game franchise, then your time has arrived.