Storm Boy: The Game is an interactive retelling of Colin Thiele’s 1960s book of the same name. From what I learned at E3, the original book, detailing the adventures of Storm Boy on the coast of South Australia, his relationship with his father Hide-Away, and his adoption of an injured pelican named Mr. Pelican. This book is taught in primary schools all over Australia, and many former students remember the story extremely fondly, the way those in North America might think of Where the Wild Things Are or Charlotte’s Web. I was attracted to the game because of its stylized, calming environment and looked forward to exploring the world of Storm Boy.

The game itself, while listed as a single-player exploration game, is three-quarters visual novel, one-quarter minigames. You explore the world as Storm-Boy while beautifully rendered text floats on the screen, presumably all quotes from the original novel. This dream-like storytelling is, at times, incredibly effective, especially towards the end, and although I have no nostalgic connection to the original book, I felt a real emotional pull at the ending, and a lot of that had to do with the design choices of the game.

Storm Boy: The Game doesn’t have the most high-end graphics, but its fetching characters and landscape capture the beaches of South Australia, and the music and in-game text all fit in very well. Mechanically, you don’t do much, usually even in the minigames, but I never felt like this interfered with the story that was being told.

Think of the Children!

I am not Storm Boy: The Game’s biggest demographic. That would be children and not just kids. This game would be especially wonderful for children who don’t like reading and just don’t see the point—it really brings the world of Storm Boy to life, and in doing so, has the real potential to make a difference in a learning environment.

Many of the minigames are entirely peaceful, with no time limit and no stress, and while they didn’t appeal to me I can see some kid, eight years old and already tired of the draining, demanding school system, drawing designs into the sand to their heart’s delight. I sincerely hope that this game will be marketed towards schools and libraries, hopefully in conjunction with the original book, to inspire children towards a lifelong love of reading. I can’t imagine any young child being upset about playing this game (but then again, I don’t have kids). 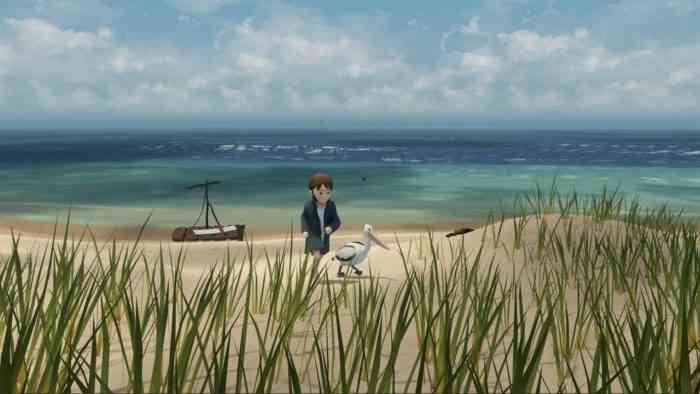 Storm Boy: The Game’s biggest flaw is its length. The price point, as of writing this, is unreleased, but it took me less than twenty minutes to beat the game, and so I hope the game stays accordingly affordable. I didn’t skip the minigames—sure, I didn’t get lost in them either, but I did play them all until I was bored. Of course, kids might spend considerably longer on it, getting lost collecting shells and feeding pelicans, but it still couldn’t take much more than half an hour. If I thought that this was because the book was quite short, that would be fine, but I get the impression that the book actually includes quite a bit more in its text. I would check myself, but unfortunately, my copy of the book won’t arrive until January, because apparently, that’s when the book goes on sale in America (totally a coincidence that there’s a movie coming out around the same time, I’m sure).

That I bought the book tells you two things: that Storm Boy: The Game was good enough to make me care and short enough that I felt like something was missing. Storm Boy: The Game was clearly created by people who grew up loving the book, and it shows care taken in the beautiful world and touching story conveyed throughout it. I only wish they’d given us more.

Wavetale Review – Wading Through the Waves

Dramatic Lab’s Star Trek: Resurgence Has Been Delayed Until 2023
Next The Elder Scrolls Online: Murkmire DLC Review – Argonians At Last
Previous The Forest Review – A Perfect Blend of Tough and Terrifying