For the first time in the Elder Scrolls franchise, the beautifully complex Argonian race is finally centered under the spotlight in the newest DLC for The Elder Scrolls Online. Murkmire, the most recent zone DLC, offers a rich delve into the culture of the Argonians — a marginalized, misunderstood and mistreated reptilian people native to the lands of Black Marsh. Murkmire has quickly become my favorite ESO zone to date due to its excellent execution of showing the harsh swamp environment of the Argonians to be just as beautiful and misunderstood as they are.

The land of Murkmire can be accessed by traveling directly there via Wayshrines once the DLC has been unlocked or purchased. It is apparent almost immediately that this land distinguishes itself from ones we have seen before: it is not conventionally pretty or appealing. It is not a place that players and lovers of fantasy would initially beg to find themselves the way they typically do with the more objectively beautiful places such as Summerset. Its swampy, humid environment teems with dangerous flora and fauna, yet still presents itself in a surprisingly attractive light.

I found it easy to fall in love with the world. I originally had low expectations for the visual appeal of a place themed around marshes, but many of its regions burst with colorful plants and shrouded temples, giving it a really unique, subtropical charm. There are tons of tribal elements built into the Argonian culture — ancient religious artifacts and shamanic connections with the trees, to name a few — that just feel different from previous races we’ve come to know in the Elder Scrolls.  Many of the quests funnel us through temples that give strong Indiana Jones: Raiders of the Lost Ark vibes, and exploration through the mysteriously exotic land truly makes you feel like you’re on an adventure rather than just being told you’re on one.

Journals and books are scattered everywhere in Murkmire, and it is worth your time to slow down and flip through them when you get the chance. Previously, we’ve known very little about the Argonians and have seldom seen them in a light where they haven’t been completely subjugated or pushed to the corners of society. The lore around the world of Murkmire thus becomes invaluable — this truly is the first opportunity we’ve gotten to dive deep into this culture, and it is very worth taking advantage of. 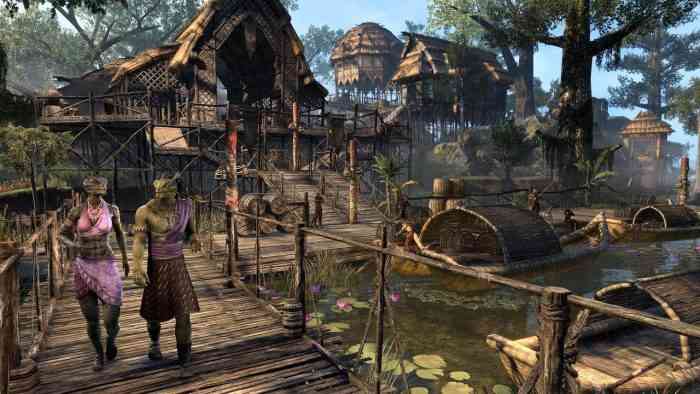 In terms of content, Murkmire is a pretty great deal for loyal ESO players, as it comes as a daily reward in the month of November for dedicated players who log in every day of the month, or as free DLC for ESO Plus members. For casual players, the price is 2,000 crowns, or a little more than $20, which is highly worth the purchase on the condition that you have a keen interest in Elder Scrolls lore. There are tons of new weapon sets that can be unlocked in quests or in the arena, two new delves, and a new arena map called Blackrose Prison.

While it is disappointing that there are no new public or private dungeons and therefore no real way to queue up for a cooperative group activity in this world, this zone is simply more tailored for individual adventurers who will find no shortage of standard quests. If taking your time to read the endless amounts of dialogue and texts isn’t your cup of tea, then the DLC offers little more than a nice new area to do more of the same quests in, and unfortunately I don’t see much draw for the brand new player or the player who rarely logs into the game.

I found myself very pleasantly surprised about the Murkmire DLC, and loved it so much that I think it could have easily stood alone as a chapter had it been given more content. I would not build up expectations about what the DLC brings to the table: it is not a new chapter, simply a new zone, and this is what it excels in being. The world feels incredibly alive, with reptiles like crocodiles and lizards scuttling around everywhere in sight and plants giving off toxic gases should you get too close in proximity.  The unique integration of a highly tribal, ancient-jungle-meets-swamp world into a game that most typically displays elements of traditional fantasy is done masterfully, and I would recommend any hardcore Elder Scrolls fan to lose themselves in its strangeness and beauty. It will not offer you any new gameplay mechanics, unique quest activities or even a new dungeon, and this is where I find that the ESO DLCs truly have room to grow. Until then, we’ll have to settle in and enjoy the exploration and tireless grinding that this new zone greatly encourages.