Shadow of the Tomb Raider DLC: The Forge Review

The first of seven DLC challenge tombs has been released for Shadow of the Tomb Raider. Accessible through either the Season Pass or for five dollars separately, The Forge begins the fulfillment of those post-game promises. For this adventure (which, in case you’re lost like I was, begins through an easy-to-miss quest marker in Kuwaq Yaku), Lara is helping her friend Abby, one of the few major compelling side characters from the main game, explore the mysterious map that her grandma left Abby on the one-year anniversary of her death. This adventure is the first of the new co-op tombs, and while it can be played with a single player, co-op is how it was designed to be played as Lara and Abby learn the truth about the latter’s heritage.

I, having one working Xbox One controller and no friends, played it alone. I only noticed the missing second player one time in gameplay, when I briefly wondered “Why is there a second path?” because remembering: oh, yeah, this is a co-op tomb. From a story perspective, however, it doesn’t work nearly as smoothly. Without Abby’s presence, it becomes the tale of how Lara finds her friend’s map and goes on an adventure to discover her heritage for her…it sure doesn’t make Abby seem very capable, or convincing. I almost wish that, if someone were to choose to play it alone, they were Abby, not Lara, but I suppose most people probably don’t want to pay to play as “that side-character from the first third of the main game.” Still, narratively, it would help those story beats hit their mark.

As far as the tomb goes, the whole DLC lasts a little less than an hour, a little more if, like me, you are just plain terrible with puzzles (flashback to sixteen-year-old me playing Tomb Raider: Anniversary with a walkthrough open in my lap). The visuals are gorgeous, the music is good, and I liked the story that unfolded once Lara (and, possibly, Abby) was in the tomb itself. I did think it took a little long to get there, and honestly, all my issues with the DLC were issues I had with the main game. Most of the side characters felt a little wooden, their animations stilted and their exposition heavy, and it took a bit too long to get to the fun parts. 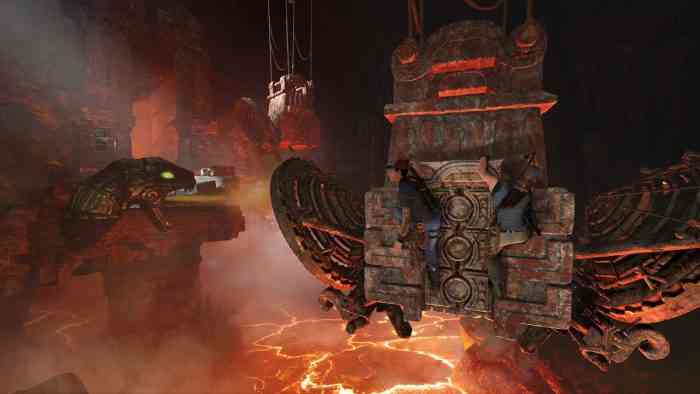 After watching some video of the co-op version, the story seems much improved and less awkward, but I don’t know that it’s fundamentally different, and while The Forge was supposedly designed to play co-op, it didn’t seem like it offered much more than the chance to play with a friend for a little less than an hour. Maybe playing all seven co-op challenge tombs in one go will be fun when they’re here, but it isn’t enough to feel worth it at the moment.

If you already have the Season Pass, I would say The Forge is worth checking out. If you’re thinking of just shelling out five dollars for the game, I wouldn’t recommend it without getting the whole kit and caboodle: it’s just not enough content for what you get, although it is fun if you’re already a fan of the game. In that spirit, I’m giving it the same score that we gave the main game when it came out, because Shadow of the Tomb Raider’s The Forge isn’t going to change anyone’s mind. If, like me, you loved the gameplay and are willing to sit through a bit of sloppy writing to get to the fun within, it’s worth it. If you thought Shadow of the Tomb Raider wasn’t worth the entry ticket, I’d sit this one out. It’s all about perspective.