It’s night and my motley companions are sleeping. The carpenter is exhausted from a hard day of cutting wood and mourning his family. And the merchant’s wife spent literally hours sifting through trash. It’s my plucky protagonist who is bravely taking to the streets to look for the supplies we really need: wood. We’ve been all out for days, and it’s starting to be a problem. We can’t cook without wood, or build new crafting stations. Our stat meters are deteriorating, and soon we will be too wretched to even do our simple tasks. Such is life in a siege.

This War is Your War

Now, I generally think it is bad form to compare a new game to an existing one, but Siege Survival: Gloria Victis (and oof, that title is a mouthful) is so similar to another game that saying nothing would feel weirder. Mainly, it is almost a beat for beat take on dour indie darling This War of Mine. They both have the same depressing tone, and the gameplay mechanics are nearly identical. I say nearly, because there are definitely some important distinctions- This War of Mine is played in 2D, looking on from the side and Siege Survival is isometric- but the rhythms and ideas are quite similar. 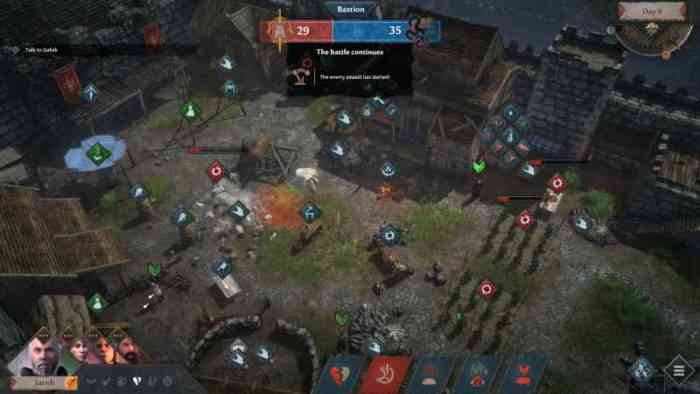 Siege Survival: Gloria Victis is about a bunch of war survivors holding out during a medieval fantasy siege. The castle is all that prevents the hordes of evil from spilling over you, so your job is to set up supply lines to make sure the troops have what they need. Food is obviously going to be a priority, as is water, but you’ll also need medical supplies, arrows, and fresh armor. Of course, those same resources that are needed for the war effort are also needed to get your infrastructure up and running. You can use wood to make arrows, to light a fire, or to improve your cooking station so that you can make food more efficiently.

As a base building craft-em-up, Siege Survival: Gloria Victis does fine. There’s a lot happening, and you’ll always have another goal. The kind of nerd who has a brain that likes to make priority lists will have a ball with those elements. When you only have one meal left, should it go to your hungriest character, or your most useful worker? Maybe you should send it on to the soldiers, they are all that stands between you and annihilation anyway. This War of Mine was commended for giving players impossible moral choices. Siege Survival: Gloria Victis captures that part of the tone.

This Ain’t No Party

All of that describes the base management side of the game, but where are you getting your resources from? Much like This War of Mine, you can send your guys out at night to scavenge the city for supplies. Unlike that game, the city is one big unified map that tasks you with finding shortcuts and access to new parts of town. The scavenging is where Siege Survival: Gloria Victis started to lose me. The bottom line is that it is just not a very fun idea. It’s a rudimentary stealth game- you have to hide in bushes to avoid being seen. But all of the caution just slows the game down. 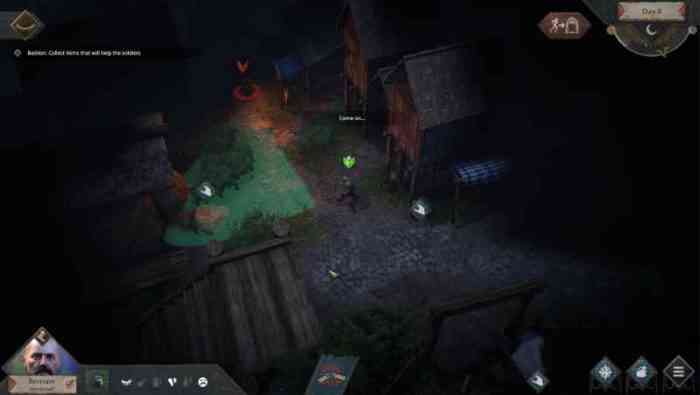 I get the tone that the game is going for. You aren’t an empowered hero; you’re a desperate everyday person. But there isn’t enough engaging gameplay to sell those ideas. Avoiding enemy sight lines and hiding in bushes were cool ideas in the original Metal Gear, but that game came out in 1987 and this isn’t bringing much to the table in the way of new ideas. You slowly make your way around the markets and shops, avoiding sight cones, and sometimes you stop entirely and wait for the AI guards to walk a different way. Hardly thrilling stuff. I found myself glancing at Twitter while I waited for the guards to get bored with looking for me. Hardly the sign of engaging gameplay.

The stealth sections also could use a bit of rebalancing. Sections of the map are locked off from you without certain tools like torches and shovels. But what happens if you pick the starting area clean, and use all your shovels (they break with use you see) on the wrong obstacles? Your abilities to get more basic resources reduce to a trickle, and the game gets even slower. This isn’t always the case, but I restarted my whole game more than once because the area I had unlocked ended in a dead-end. A bit of that is on me- I probably could have used my building resources more efficiently in the first place to avoid such a predicament. But it ultimately reveals a lack of flexibility in the crafting tree. Next time I restart, I know I’ll need to make a station to construct more shovels an early priority.

The World is Grimdark

The world of Siege Survival: Gloria Victis is an original fantasy one, and I find myself mourning a lack of panache in indie video games. There’s an evil dude with a big antler helmet. The situations you run into are classic grimdark fantasy problems, with mundane injuries spelling doom for innocent peasants. And all of it is presented with the washed out greys and browns of a very sickly bowl of oatmeal. I thought the nonsense Latin subtitle was a bit of a red flag, and now I wish I was even more right. At least a red flag would’ve added a splash of color. 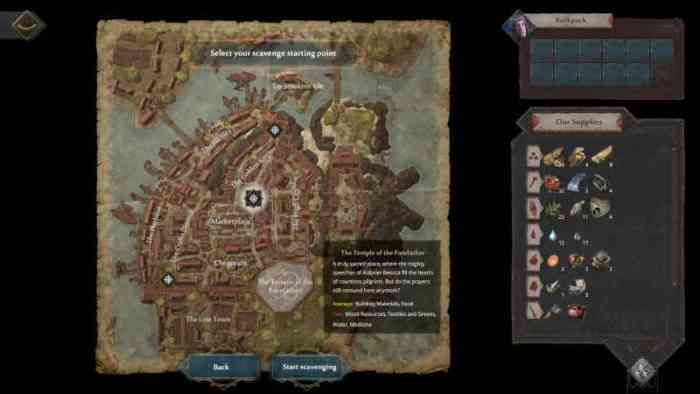 Seriously, there’s an intersection between “low fantasy,” faux-deep Latin, and cathedral aesthetics that always end up looking like the same dishwater. That’s not to say developers aren’t allowed to play with those toys. But they should ask themselves if they are doing anything interesting. You see this aesthetic coming out of a lot of indie studios in Eastern Europe. Maybe I’m just an ignorant American, but I think these games could use a dollop of whatever insanity Japanese games are playing with. Siege Survival: Gloria Victis does a lot of things well, but the whole experience would be much better with the irreverent gonzo charms of a Resident Evil or something like Bloodstained: Ritual of the Night, which is also playing with a European cathedral palette and doing a whole lot more.

I would recommend Siege Survival: Gloria Victis to players who like difficult management games and muddy depressing fantasy. I know you guys are out there. I’m one of those people. And despite my many criticisms of the game, I intend to keep playing it after this review has gone live. That’s not necessarily always the case! But there is a spark of something at the core of Siege Survival: Gloria Victis. It’s a puzzle, and if I can just line all the pieces up, I know I’ll feel the satisfaction of solving a difficult gaming challenge. But I will not be able to help imagining the game this could have been; brighter, sleeker, and more imaginative.

Road 96 Has Officially Launched On Xbox And PlayStation Platforms

Night is Coming Finds a Publisher