Every so often a new side-scrolling adventure comes out with its bright and colorful characters. It has gameplay inspired by those titles we all grew up with, barreling down what seemed like an endless path as we hopped, skipped, and jumped our way to the end, accompanied by frantic yet delightful music. This; however, is a different experience. Shiny, developed by Garage 227, uses gameplay reminiscent of Super Mario Bros. And Donkey Kong Country with a somber edge that can’t help but make you feel sad for the little robot hero of our story.

Without any narration, the opening cinematic and subsequent actions taken in the game fall subject to interpretation – despite the synopsis being available on the games steam page – but the gist of it is: Kramer 227 has been abandoned on a doomed planet with other robots and little hope of escaping. A ship has been built and it is up to Kramer 227 to collect energy cores and repair his fallen friends to power and repair the ship so they can leave the abandoned world. This game does an excellent job of pulling at your heart strings: we see Kramer 227’s tireless attempt at creating fuel for the ship in vain, we see the gorgeously barren, decaying world he is trying to flee and most haunting of all is the beautifully crafted score that accompanies his journey. The soundtrack is a reflection of the devastation around him, of how futile his task seems, how bleak their future is. It makes you root for him the same way you applaud a fallen athlete and hands down the music is the stand out feature of this game.

“With breathtakingly haunting audio and some nostalgic gameplay, Shiny is a wordlessly emotional story with a sympathetic hero that has all the potential to be a great experience.”

Players will guide Kramer 227 through side scrolling levels at their own pace. The camera can also be vastly shifted in all directions, which is key for finding hidden platforms and nooks where fallen robots or power cells may be tucked away. Rather than having a timer in each level, Kramer 227’s power levels (health bar) are slowly being chipped away but are replenished when reaching fallen allies and checkpoints. An interesting addition to the side-scroller genre is the limited-spawn checkpoints. Each time a checkpoint is activated, a number appears on the terminal. This is how many times Kramer 227 will be able to respawn at this point. The amount is often generous but also reflective of the trials you have ahead of yourself, so the bigger the number, the harder the time you can expect.

The controls are basic – movement and camera – but I found it easy to jump in and play. Using the keyboard was easy, but it feels like the game is better suited for use with a controller. More than once when I entered the options menu and exited, the menu refused to close but the game resumed. I tried several options to try and get rid of the menu but in the end I had to restart the entire level to be able to play again. The same can be said for one of the obstacles on the third level: it was expected I would use my power cells for temporary invincibility to cross an area. I did, but died shortly after and – having expended my invincibility boost – I was left scratching my head on how to continue. 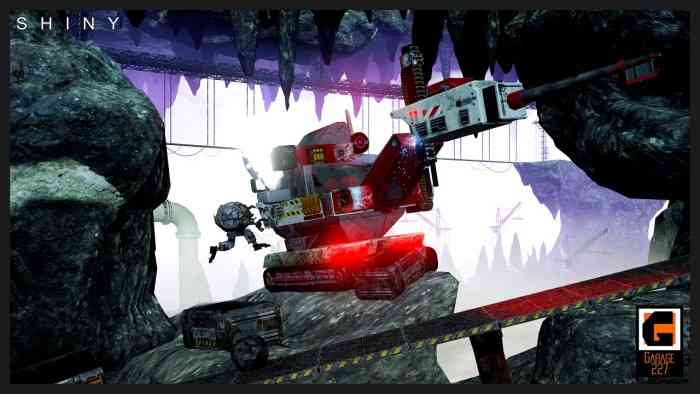 As I said the audio is the standout feature for this game and the kind of emotion it can illicit is astounding for a small indie title. More than a few times I found myself letting Kramer 227 stand still and just taking in the beautiful music and devastating scenery. The levels may come across as barren at first but it’s the finer details that show you it’s supposed to be barren and is handled very well, however I would have enjoyed a bit more expansive level design like the Donkey Kong Country series.

With breathtakingly haunting audio and some nostalgic gameplay, Shiny is a wordlessly emotional story with a sympathetic hero that has all the potential to be a great experience. However, the menu bugs and basic level structure can leave this something of an unintentionally bleak affair in the wrong way. The controls are okay and the fine details in Kramer 227 and the world around him are beautiful, but it isn’t enough to distract from the bare bones state of the world around him.