Sheltered Review – Not Every PC Game Ports Well To Console

Sheltered is a survival game where you have to manage the resources of a fallout shelter because, for god’s sake, the world has been destroyed by a nuclear holocaust. While the game has some entertainment value, this pint-sized 8-bit indie can’t offer much that you can’t already find out there for free.

In Sheltered, you get to choose the basic look and characteristics of your nuclear family… that will be the last of those, I promise. The point of the game is to survive for as long as you can keep your survivors alive. Your survivors must eat, drink, go to the washroom, shower, sleep, clean etc. in order for them to go on living and you go on playing. That’s where the resource management comes in. You have limited amounts of scrap to fashion necessary items and your shelves, oxygen filters and water rations are continually going down. You can construct new resources in order to compensate, but you need to go scavenging into the wastes for that.

“…if you run into any one else out there and they decide they want to fight, be that for dickish reasons or that they are a bear, you’re going to have to scrap them.”

The wastes can offer you places to loot like destroyed buildings, reservoirs or various other landmarks. Sometimes they are full to the brim with items, sometimes they are a waste of time. But that brings us to the other part of Sheltered: if you run into any one else out there and they decide they want to fight, be that for dickish reasons or that they are a bear, you’re going to have to scrap them. The combat is rudimentary, basically what every turn based RPG you’ve ever played has brought to the table, but it’s a breakup of the shelter life and that can be welcome. You have the option of putting your characters on autopilot which is certainly nice, especially when you start taking on more and more people, but there are lengthy stretches where you’re holding down the fast forward button as you wait for something important to happen. 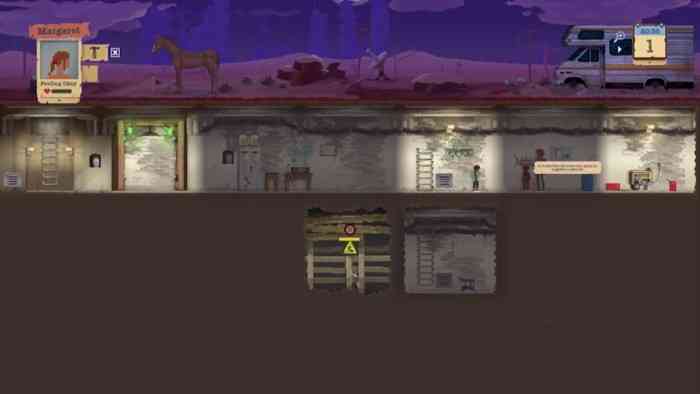 The game is surprisingly intricate considering its 8-bit, vault life status but it makes for a complicated and difficult game that I wasn’t expecting. There is no room for error in Sheltered as the early stages of the game are vital and any error will result in you watching your family slowly and painfully die. Food is integral to survival, but the only way to acquire food is by trade or scavenging – both which require you to go exploring. But you can only explore as far as you have water to sustain you. So, you have to build more water tanks to go further, but you need scrap to build the water tanks that you can only get from trading or scavenging… You can see where I’m going with this. The first few choices you make are vital! Otherwise you could quit, like a quitter, or you can watch Ed, your pet horse that you thought was a good idea to take into the shelter, slowly die from starvation. I, of course, kept my golden lab, Terry, alive the longest but that just meant that the kids had to watch their parents die and then hold Terry as they just stopped trying to get up. It sounds incredibly cruel but that’s because it is. You have a lot of downtime as you wait for things to get done, so I began concocting stories for each of my residents and when food began to run out, I had to choose who had the best back story – sorry Charlie.

“Hopefully you find a bounty of treasure in the areas around your shelter because if you don’t, suddenly Charlie’s haunted past of having to kill his wife and son so he didn’t watch them starve just isn’t enough to give him his ration for the day.”

But this is one of the fundamental problems with Sheltered. A lot of it is based around luck and your ability to understand how the shelter operates. The luck factor is what’s around you when you start. Hopefully you find a bounty of treasure in the areas around your shelter because if you don’t, suddenly Charlie’s haunted past of having to kill his wife and son so he didn’t watch them starve just isn’t enough to give him his ration for the day. If you luck out and do get plenty of spots to loot around your shelter, than you have a great chance of surviving. But you really need to figure out how best to manage that loot you acquired because the game isn’t going to tell you. Which is fine since you don’t NEED a tutorial for this style of game but some helpful hints along the way or even just a slightly more in depth tour of the basics would help. Ultimately, though, Sheltered is undone by the platforms it’s released on. It will only take you to the character create screen, the first thing you do, to realize that this game was meant to have a mouse and keyboard. There’s a lot of cursor movement and clicking on small objects that a PS4 controller just isn’t meant for. There wasn’t anything quick action that you had to do but scrolling around your shelter and clicking on various items and people became quite tedious. 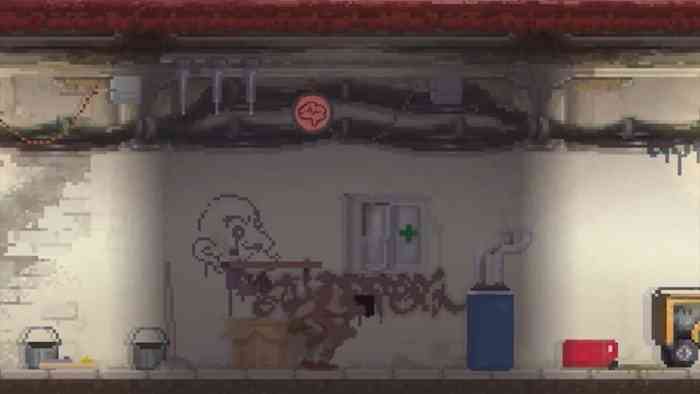 Overall, Shelter is an indie game that accomplishes most of what it sets out to do but is ultimately not really meant for a console release. The controls just aren’t meant for this kind of game and coupled with just how difficult it really is, it really took away from a lot of the enjoyment I could have garnered from it. Considering I can get Fallout: Shelter which also suffers from a control issue but is a little easier to manage and to play as well as being related to the ever so popular Fallout franchise on my phone for free… paying for Sheltered on my Playstation is a tough pill to swallow. 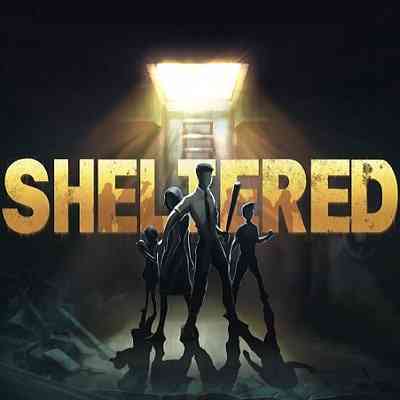 
Electronic Arts CEO Seems to Be Having Second Thoughts About NFTs

Sheltered 2 Review – Better Than Sitting In a Hole

Greak: Memories of Azur Review – With Family, Anything is Possible
Next Shantae and the Pirate’s Curse Review – A Humorous Tale of 2D Platforming
Previous Quantum Break Review – It’s Remedy’s Time to Shine Once Again