Marvelous Entertainment has graced us with yet another entry in the Senran Kagura series, aka Shinobi Girls with Impossible Boobs. Senran Kagura: Peach Beach Splash dares to ask the hard-hitting questions. How important is plot? How thin can you stretch it while still claiming your game has a plot at all? How great are boobs?

Rest assured, there is a story here. It’s as tiny and stretched as those bikinis, but it absolutely exists. All of the Shinobi are teleported to an island and forced to shoot each other with water guns until a winner is chosen. Okay, so it’s not exactly Tolstoy. You can play through a series of story missions involving each of the four Shinobi clans, as well as dive into some side episodes, tournaments and a survival mode. The story mode cutscenes are stuffed with innuendo and references to other games in the series, but it’s never exactly difficult to follow along although there were a few moments where I couldn’t remember which character was part of which clan. Every Shinobi is either bubbly, ditzy, reserved or sporty. Thankfully the gameplay doesn’t require you to keep track of clan politics and alignments.

Each mission has three different difficulty settings but do yourself a favor and go right to hard mode. Not only is it slightly mislabeled, but there’s no other way to afford all those sexy items in the shop. These aren’t functional upgrades, just cosmetic add-ons. In a slight departure from the usual Senran logic, your default outfit is as skimpy as it gets. Anything you work to unlock will actually show less skin than what you start off showing. Another way to rack up cash crazy fast is the tournaments. There, the difficulty curve is much more satisfying. Plus you don’t have to wade through a sea of dialogue to get to the good bits.

I assume that anyone playing this game is all aboard the lewd-comotive, but let’s make it clear; Peach Beach Splash is swollen with fan service. One of the main menu options is a dressing room/shower. There you’re free to dress up the girls, arrange them in a diorama and get a bit handsy. Using a pair of disembodied hands. Subtle! Other notably lewd moments include most of the dialogue, the combat and just… most of the game, really. Combat, in particular, gets racy as heck. If you knock down an opponent, you can perform what’s called a “Squirmy Finisher.” The camera changes to a first-person perspective and you’re given a candid view of your defeated opponent. Then you just blast them with water. If you target a specific area for long enough, you can dislodge whatever part of their outfit you’re aiming at. No, I’m not posting a screenshot. This is a PS4 game, so there are a couple of things left to the imagination. Also, they definitely show this happening in the trailer embedded above. 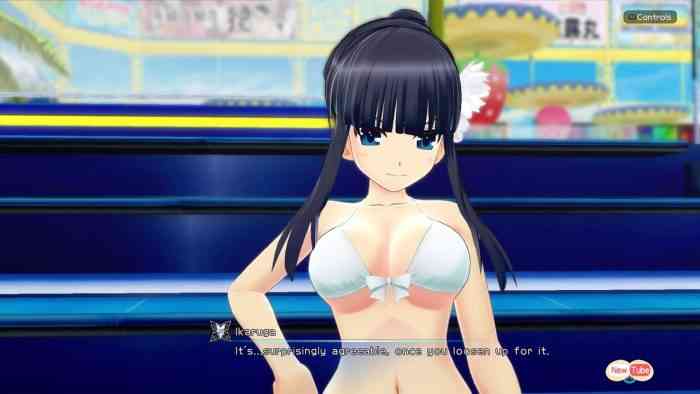 Even beyond the game’s inherent boobness, these aren’t your typical water fights. Using a pair of jet-tanks resting on your hips, you can blast into the air. It’s great for dodging and scouting, though it drains a ton of water. You can also powerslide along the ground if you wanna go low. If you ever run out of water, all you have to do is pump your tanks back to full capacity. Never mind what it looks like. The water guns are fun, summertime versions of the usual fps standbys. The sniper rifle and shotgun are powerful but costly. The grenade launcher is a little unwieldy, though still pretty potent. The dual pistols suck. They cost the least in terms of water while doing very little to the enemy. You can also reload while in midair, which is a great way to minimize your period of vulnerability.

“Even beyond the game’s inherent boobness, these aren’t your typical water fights.”

If you’re looking to add a little depth to the combat, you can customize your card deck. The cards confer various bonuses and abilities, with cooldown times dependent on their power. The duplicate cards you accumulate between battles can be used to upgrade characters, weapons, and cards. It’s a great way to build up your strength, though it’s something you could sink dangerous amounts of time into. You can also take advantage of a risk/reward mechanic that gives you extra strength after being soaked by the enemy. Different weapons fill up that soak meter at different speeds. Allies can soak one another, dealing no damage in the process. This is a useful tactic when playing with other people, though your AI teammates just aren’t that clever.

For all its playful polish, this is a Senran Kagura game at heart. The story battles take time to ramp up. The dialogue between said story battles can get a little tedious. The controls are pretty good, though at times I felt like they were rough around the edges. The fan service vibes are at full power with Peach Beach Splash. If this is your thing, then welcome to the fan service harvest festival. It’s a bumper crop this season for sure. If fan service makes you uncomfortable, you are going to hate this game. The Senran series is not shy about catering to its target demographic. The people wanted boobs and by god, they got them. Yet, underneath the skimpy outfits, clumsy sex metaphors and troubling dressing room antics there’s a pretty fun game waiting. While fans of the series may miss the usual over-the-top shinobi antics, the water combat moves fast enough to keep your attention. As long as you’re willing to see this game for what it is, Senran Kagura: Peach Beach Splash is a bouncy good time waiting to happen. 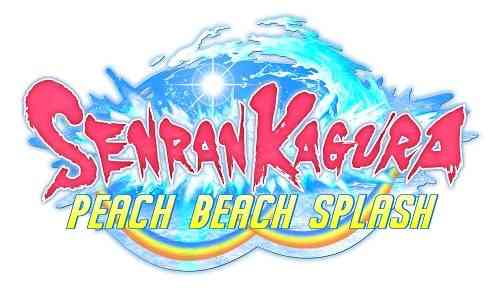