The fighting game scene is probably the hardest video game genre to break into. It’s crowded for one- Street Fighter is forever a mainstay, and Mortal Kombat (and the similar Injustice series) came out of nowhere to become the premier series. Then you’ve got Super Smash Bros, not to mention Soul Calibur, Killer Instinct, and Tekken. Unless you’ve got a great new gimmick, it’s an uphill battle to establish yourself as a worthy series. It’s hard to succeed with style alone. But damn if Samurai Shodown doesn’t just have that much style.

I knew we were dealing with something awesome when I was told to hit any button, so I did. “Samurai Showwwww-down!” the voice actor yelled, with all the intonations of the oldest, dirtiest Kung Fu movie. This isn’t Kurosawa, this is Master of the Flying Guillotine. It’s brash, pulpy, cheesy, and I love every little art decision made. The voice acting is exquisitely extra. The graphics aren’t the highest definition, but they are among the most gorgeous I’ve ever seen in a fighting game. It’s all fabulous, from the cute animals in the loading screens, to the weathered flags that represent the different levels.

The next thing you’ll love is the roster. It’s not very deep, which is something of a disappointment. Mortal Kombat 11 shipped with 24 characters available from the get-go, with another three unlockable, and a great deal of DLC characters coming down the pipeline. Samurai Shodown has got 16 characters, and there seem to be DLC characters promised in the future, but the details aren’t entirely clear. It feels a little skimpy when you look at the character select screen; more so when you realize that you only want to play as a few of them.

That being said, this is a great and colorful cast of characters. They are international, giving us classic samurai, ninjas, demons, and nature witches, all of whom have exciting backstories. There’s a story mode that can’t quite match the cinematic mastery of the latest Mortal Kombat games but is a helluva lot better than Street Fighter, so it’s really quite good. I sort of fell in love with Darli Dagger, a pirate with purple braids and a huge saw-sword that she calls “Libertalia.” That’s a cooler character than 99% of the WWE.

So the art and design in Samurai Shodown is top level, some of the best around. The presentation and storytelling is upper mid-tier, better than a lot of the most popular games in the genre. But how does the gameplay? That’s where you’ll find things to be more of a matter of taste.

I like fighting games that have a strong foundational control scheme. It could be a light attack/medium attack/heavy attack system, or be based in punches and kicks, or Super Smash’s combination of basic and special attacks. Having that strong foundation allows you to include basically similar characters (Link vs Marth in Super Smash) or totally gimmicky characters (like Mr. Game and Watch or Olimar in Super Smash). It also creates a good trajectory for learning to play the game. Easy to pick up, but hard to master. 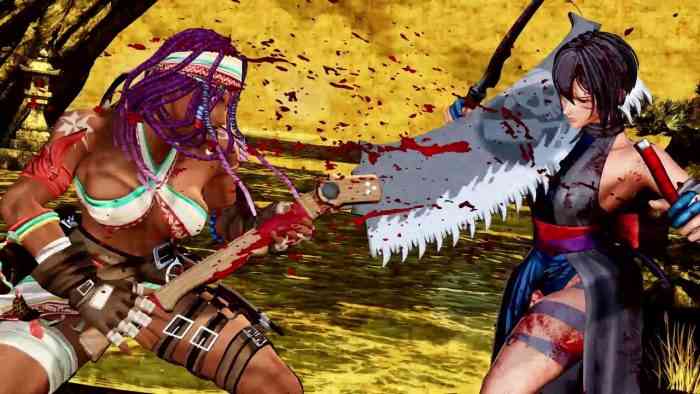 The controls in Samurai Shodown are not easy to pick up. Well, it’s easy to grab a controller and button mash to great effect- you may even have a great time doing it! But it’s harder to get a hang of the basic controls. There’s a tutorial that will get you dashing and combo-ing, but the character to character buttons feel inconsistent. Sure you’ve got the ostensible combination of light, medium, and heavy attacks along with a kick, but the different characters feel so different, these descriptors don’t feel entirely accurate. One swordsman may slash with the square button and do a leaping strike with the X button, but then another character does a pommel strike with square and a kick with X. But then Mayan warrior Tam Tam will start to do his sword spinning move with any button if you aren’t otherwise precise.

That’s not necessarily a failing of the game, but it wasn’t to my taste. These fights can involve a lot of waiting with sudden bursts of violence, making the proceedings feel entirely fast-paced Combine this with the short life bars, and the level of mastery demanded is high. I know that appeals to most fighting game fans, but it’s not the kind of thing I could just invite over casual friends to play on a Sunday afternoon. It demands a high level of technical skill and lacks the chaotic hilarity you’d find in Super Smash (only bob-ombs on high). That being said, it’s a gorgeous game, and I could probably rope friends in for the style alone. If you have a community of fighting game aficionados or some pals who love over the top Wu-Tang movies, there’s a lot to be found in Samurai Shodown.

Samurai Shodown NeoGeo Collection Review – Swift, Slick, Slice
Next The Sinking City Review – Tense and Nerve-Wracking
Previous Bloodstained: Ritual of the Night Review – Just What You Were Hoping For