Two Big Events Are Scheduled For the Same Day

June will be a big month for Samurai Shodown fans. Not only is the game coming to PC via Steam, but the third character in the Season Pass 3 DLC set, Shiro Tokisada Amakusa, will also be arriving–on the same day, no less. Amakusa has historically been a staple of the franchise, having been introduced as the main villain of the very first game and returned frequently ever since, but he hasn’t appeared in the 2019 game until now. There’s one simple reason for this: the 2019 game is technically a prequel to the original Samurai Shodown, which means that Amakusa is supposed to be dead. We gotta say, he’s looking pretty good for a walking corpse, but that’s not exactly new, either. In Samurai Shodown, Amakusa has always been very pretty–and very dead.

Unlike most of Samurai Shodown’s iconic characters, Amakusa is based on a real historical figure. Shiro Tokisada Amakusa was a Japanese teenager who led a Christian rebellion against the Japanese government, the Bakufu, in the 1600s. The rebellion failed, Amakusa was executed at the age of 17, and he went down in Japanese history as a strange mix of would-be messiah and vengeful spirit. Samurai Shodown’s portrayal of him tends to lean toward the vengeful spirit, with him being resurrected by the dark god Ambrosia in exchange for bringing said dark god into the world. However, it’s made clear that Amakusa isn’t truly evil, and in subsequent appearances, he wavers between seeking to atone for his past sins and embracing the monster he’s become.

In this outing, Amakusa will be voiced by Shusaku Shirakawa, who also provided the voice of Gebel in Bloodstained: Ritual of the Night. We’re looking forward to hearing him make those iconic Amakusa cackles. He’ll be arriving on the heels of fellow DLC character Hibiki Takane of The Last Blade. 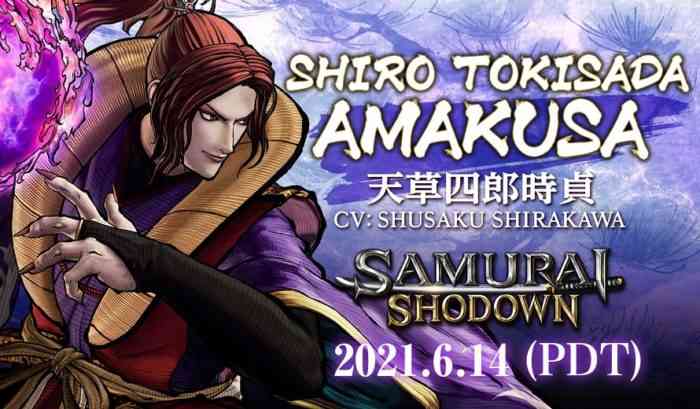 Samurai Shodown will be coming to Steam on June 14th, 2021. Shiro Tokisada Amakusa will launch as DLC on the same day.

Who are you hoping to see added to SamSho next? Let us know down in the comments, or hit us up on Twitter or Facebook.