New But Not Unique

Roguebook is a fine game, in fact, I enjoy it playing it. However, I don’t think it’s a spectacular game – at least not as it stands today.

Roguebook is a new take on the roguelike-card game subgenre with clear inspirations from titles like the two listed above. You play as a small group of heroes set out on a quest to repaint and revive the world of Faeria. The path you take to achieve that goal is up to you as you create your own world using your paintbrush and ink. You can head straight to the boss ahead of you or detour off the beaten path to take on more enemies and to better prepare yourself for the battle that lays ahead. The option to create your own path is nice as it gives you the freedom to make the run as easy or as difficult as you want – but keep in mind it might not always be the wisest move to tackle every battle you can. 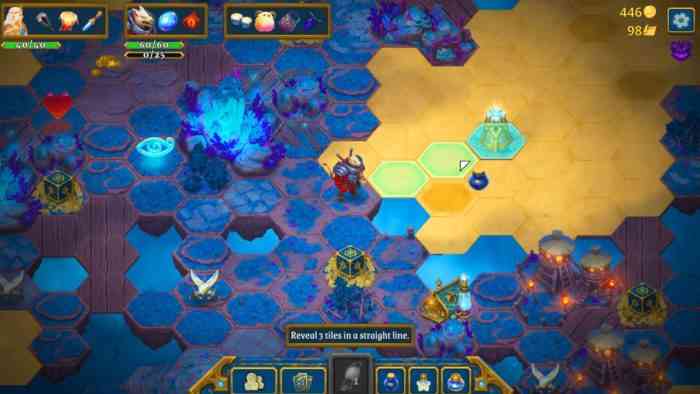 A Fine Cast of Characters

There are four different characters to play as with two being unlocked right from the start. Every time you start a new run you select which two characters you want in your party – equipping a deck unique to those two. You’ll find and add more character-specific cards to your deck throughout the run and can even level your characters to unlock unique traits that will help you in battle.

Sharra is a Dragonslayer that uses lightning-fast moves to deal powerful and cost-effective damage with a variety of cheap cards. Sorocco the first mate serves as a tank with a deck full of defensive cards ready to shield his allies. Seifer is known as the Blood Tyrant for a reason as he is able to deal big damage while summoning his own army of minions to attack by his side. Finally, Aurora the Mythmaker is the ultimate support, ready to buff her allies and manipulate time to keep them safe.

Battles consist of your standard card game mechanics. You’ll start each turn with a limited number of energy to use and a hand full of offensive and defense cards. One character will take the lead standing in front of the other, taking the brunt of the attacks at the end of the enemy’s turn. Luckily, there are cards that can switch the placement of your two fighters such as the basic defense cards every deck starts off. Depending on the traits and relics your characters have, you’ll gain specific bonuses for your placement, adding an extra layer of strategy. 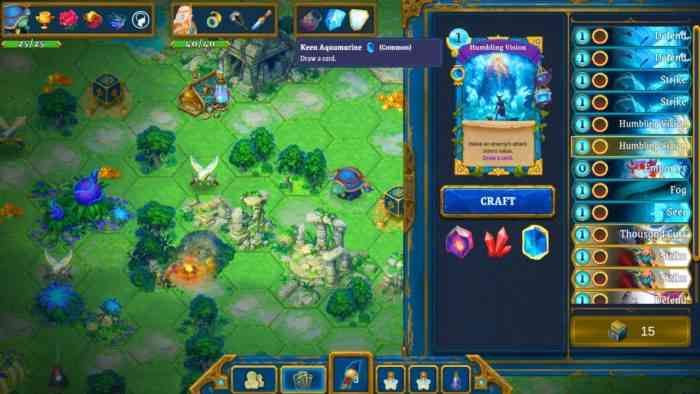 Cards can be found and drafted throughout the world and can even be upgraded by crafting them with a special gem with a unique attribute such as “Draw a card” or “Heal your party for x amount”. Additionally, relics can be bought or won through battle and can be equipped to the character of your choosing or to the party as a whole, with each offering its own benefits. There is a lot of freedom in how you play Roguebook which is definitely a bonus.

The music is nice and atmospheric but didn’t overly stand out as anything special to me. The same goes for the graphics, its a cute and pretty fantasy game that looks really good but the art style isn’t that unique. While the characters are cool, the game doesn’t really stand out – which is ultimately my main problem with the game, it’s nothing special.

The biggest thing that distinguishes a truly great roguelike from all of the others – and trust me, there are a lot of them now – is originality. Roguebook definitely tries to be original with its open-world map and dual-character combat system, but in the end, it just feels like another rip-off of Slay the Spire. Monster Train was another game that was clearly inspired by Slay the Spire and incorporated a lot of the same or very similar gameplay mechanics, but at the same time, it still felt unique. It added a whole extra genre to the game with its tower defense mechanics, and while Roguebook tries to do something new, it doesn’t go that far.

I also ran into pretty frequent technical problems, having the game crash on me multiple times when returning to a run or trying to load up a new one. Hopefully, that will be sorted out in the final release, but it definitely hindered the experience a tad not knowing whether or not I’ll lose my run due to a game crash and not lack of slack and poor decision-making like usual.

If you’re looking for something new to play and are a fan of roguelike card games, then you’ll probably have a good time with Roguebook. It’s a fun game and does a solid job of being what it is – when it works that is. However, if you’re looking for the next big genre-defying roguelike then you might be a bit disappointed as Roguebook isn’t really that. It is a good game, just not an incredible one and maybe that’s enough.

**PC code was provided by the publisher.** 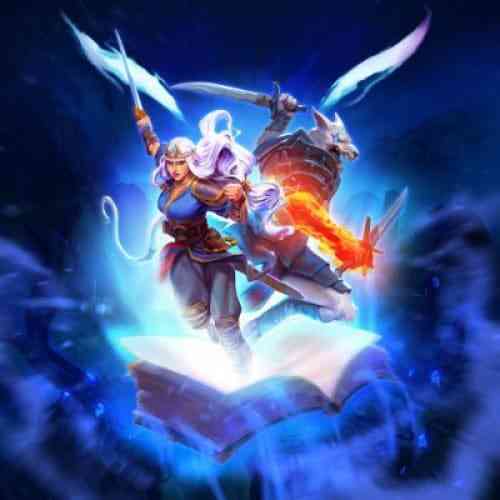