It’s always disappointing when a game doesn’t quite live up to its potential. Edge of Eternity has the writing, voice acting, monster design, and 2D art of a fantastic dark RPG, but the clunky 3D graphics, clunky combat mechanics, and especially the camera drag it down. While it’s still a hard-hitting game in its own right and the characters are very engaging, I wouldn’t recommend it to anyone who isn’t willing to spend half their playtime grappling with controls and dealing with design oversights. Also, while they are impressive, I really don’t think the dynamic day-night and weather systems add much to the experience.

A World on the Edge

Edge of Eternity spends about ten minutes pretending to be a standard JRPG and introducing its turn-based battles, snappy dialogue, and the strong bonds between teen heroes up against massive odds. Then it rips the carpet out from under the player by forcing you to guide those kids through an active battlefield as they drop one by one, all while you’re being pursued by a glowing, endlessly resurrecting figure. Other games may use the idea of a world at war as a backdrop. Edge of Eternity is not pulling any punches. These kids are child soldiers, fighting an enemy that far outclasses them, and most of them don’t have any plot armor.

The prologue also features what may be the worst escort quest ever, at the end of which the priest your whole party died to protect goes and participates in a faulty human sacrifice ritual called the Ascendance. It’s supposed to end the war. Spoilers: it doesn’t work, and then ritual even tries to claim the life of protagonist Daryon, the last man standing. He destroys the ritual in order to survive and turns his back on the war, completely disillusioned. And this is just the game’s opening act. Edge of Eternity is an unrelenting parade of grim humor against the backdrop of a fantasy world being slowly devoured by war. This dark tone is made more bearable by a host of lively characters clinging to life and hope as best they can.

I’m not kidding about the state of the setting. The world has been invaded by aliens called the Archelites who are curb-stomping humanity with giant combat robots and the deadly, all-consuming plague known as the Corrosion. After losing just about everything and everyone, soldier Daryon deserts the frontlines and heads back to his home to see his adopted sister Selene and their mother, who has contracted the Corrosion. Against their mother’s wishes, Daryon and Selene set out in search of a cure for the Corrosion. But Selene is dabbling in salvaged Archelite technology and Daryon is keeping secrets about the horrific experience that led him to desert, and their quest rapidly gets them both in over their heads. 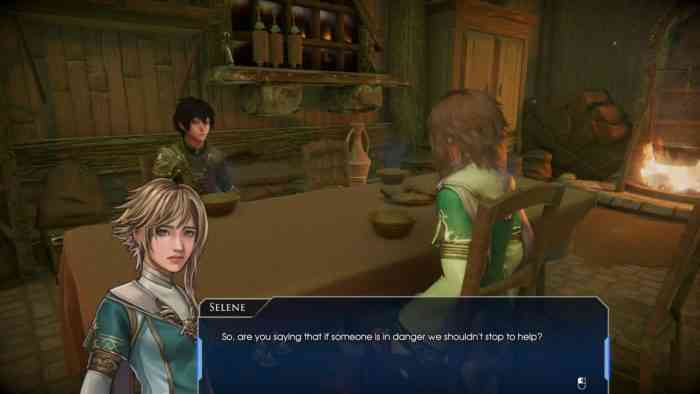 The Camera Hates You

Well, that sounds excellent so far, so what’s the problem? The gameplay. The gameplay is the problem. Edge of Eternity uses a Final Fantasy-inspired turn-based battle system. Turn order is decided by a slowly filling white meter. Do not mistake the white meter for a health bar. It’s easy to do, but the actual health bar is the red one underneath the white meter. Combat combines standard turn-based RPG combat with the tactical complexity of SRPGs. It’s not enough to simply choose the right commands–your characters need to be in the right places as well. Both you and your foes can interact with environmental items on the battlefield. Characters recover health between battles, SRPG-style, which is very convenient. Attack animations take a long time and spellcasting takes approximately forever, which is less convenient. This all sounds fine in theory, but in practice, it’s a bit of a hot mess. 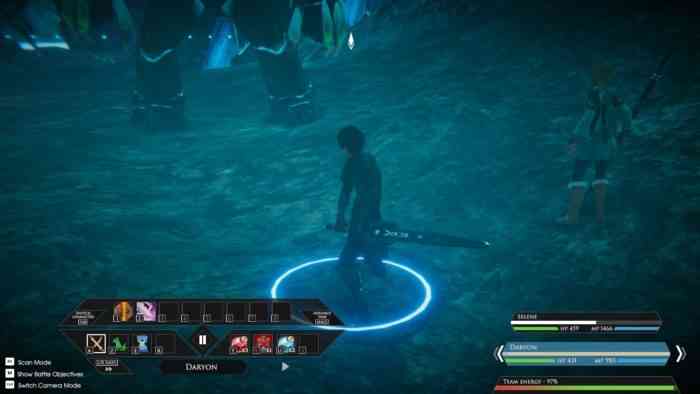 The camera constantly switches between JRPG-style close-ups of the characters and an SRPG-style aerial view of the battlefield. Battles look cool when the camera follows the character, but I wish the game would just stick to a stable zoomed-out camera like most strategy games. Not only is it hard to see the full battlefield even in the aerial view, the constant jerking about made me feel ill. The dynamic day and night system adds a lot of atmosphere to the world and the environments are gorgeous at night, but time moves too quickly. You can go through an entire day and night in one particularly lengthy battle, which is weird. Fortunately, enemies can be viewed–and avoided–on the over map, which is nice given how much of the game is spent trying to get from point A to point B without running into something that might be too tough for you. Unfortunately, you can’t really dash for more than about 10 seconds before you start hemorrhaging team energy, and if you run out of that you start bleeding health.

Graphics are in the acceptable range, particularly during battle. In cutscenes, however, facial and hair animations are more than a bit janky. Even in gameplay, long, flowing clothes tend to clip through things when a character runs. There’s no way to deny that the textures can be really bad. Selene and Sil’s hairstyles are especially questionable, especially the bangs. This sticks out because the anime-style character portraits used during dialogue are actually very good, which makes me wonder why there are so many in-game cutscenes. It would look better if the cutscenes were visual novel-style stills. In fact, maybe this game should have been done with sprites and pixels. I think I’d love it if it was a 2D SRPG. 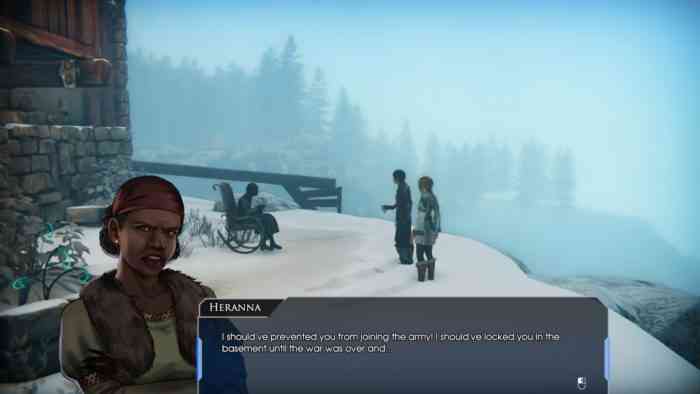 Edge of Eternity is almost brilliant. The writing is great, but the graphics, gameplay, and especially the camera angles drag it down. If you crave some dark JRPG action and are willing to put with questionable combat mechanics, by all means, check it out. However, if you hate the idea of trying to plan out a strategy when you can’t see half the enemy forces or you get motion sick easily, maybe give this one a pass. 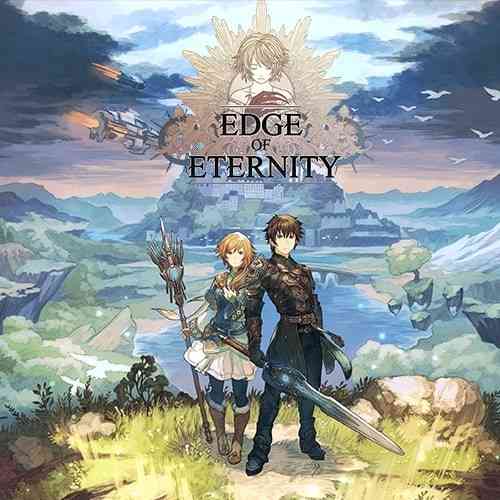