Rhythm of the Universe: Ionia Review – Out of Tune

Rhythm of the Universe: Ionia Review

Rhythm of the Universe: Ionia opens with a beautiful, lush cinematic that seems to promise an epic tale: evil forces are closing in on a city and its citizens are being evacuated. But that enticing premise gives way to a disappointing, simplistic experience that despite some attempts to utilize VR’s potential, has you too often watching instead of playing.

You play as an alien boy in a strange land called Ionia, which I’ll admit is often a pretty place. Like Avatar’s Pandora, it’s a forested paradise abounding in fantastical creatures and ancient curiosities. You embark on a quest with your sister, Allegra, to save one of these creatures who is threatened.

All of which sounds fine, except that Ionia is just far too short on both time and gameplay. As you make your way through its 4 chapters, you must overcome obstacles and that means mostly climbing. You do a lot of climbing and it’s suitably fun for a time but that is really all you do in the game. It begins to lose its appeal after a while. 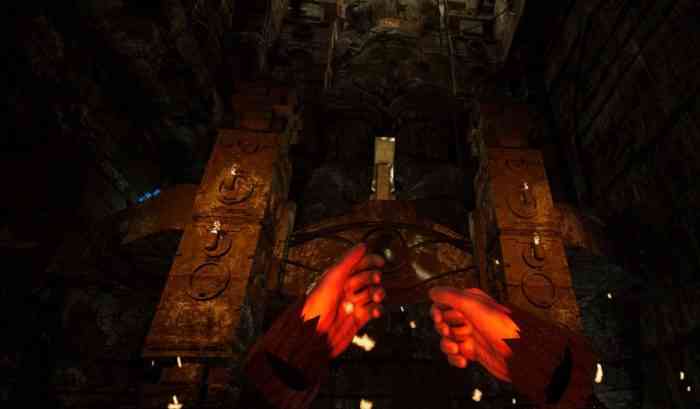 There are a few puzzles as well, including ones involving music (hence the title) but they are laughably easy and even by some chance you don’t get them right away, the game will literally tell you what to do after not too long. When Allegra told me I had to “find a fruit” we needed for one task, there was literally one cluster of bright red fruit a few feet away in an otherwise green grove of trees. Nobody likes overly-frustrating puzzles but Ionia is the other extreme.

Other than the climbing and easy-as-pie puzzling, Rhythm of the Universe: Ionia is too often a passive experience. There are many long sequences where you are literally stuck in one place, listening to Allegra or some other character talk. It would have helped a lot to have some dialogue options sprinkled in here and there, allowing for some relationship-building or forking narrative paths depending on the choices I made. As it is, Rhythm of the Universe: Ionia makes you a silent player in this (very) short story.

A Tale of Two Games

And when I said earlier that Ionia is pretty, that isn’t completely true either. The visuals are actually very inconsistent. Certain assets are definitely beautiful and well-rendered. Characters like Allegra look quite lifelike and detailed, with realistic movements and smooth lip synching. Or the gigantic forest creatures are awe-inspiring as they tower overhead, in full 3D virtual reality.

But then one of them threw up on me as part of a cinematic, and when I turned to look at it on the ground, the green “puke” was just a pile of triangular polygons floating oddly. It’s at times like this that the visuals in Rhythm of the Universe: Ionia are actually PS1-era bad, which is a jarring contrast to the lovingly rendered characters and cinematics (which you’ll see in the trailer above). This kind of wild variation in visual quality was distracting for me as I played, preventing me from ever fully believing in this fantasy world.

The length of Rhythm of the Universe: Ionia is another bothersome aspect. VR games have been notorious for their short-run times; but Ionia’s one hour of game time from start to finish feels so brief as to barely qualify as a full game instead of a demo. There is an implication that this is just the “first episode” in a series but for many purchasers of Ionia this will feel unsatisfying. Even a famously short VR game like Vader Immortal was longer than this and gave you extra practice levels to enrich the experience.

Ionia has some appealing concepts and the environmentally-conscious themes show its heart is in the right place. The climbing mechanic and other physical interactions are also well suited to VR. But there just isn’t enough to do, and in Ionia’s blink-and-you’ll-miss-it run time I was never challenged physically or mentally. Even the centerpiece musical aspects really just amounted to me plunking a few notes and moving on. Despite a few highlights, this is one adventure that doesn’t live up to the magical premise.