A Whole New Dimension To Explore in Rift Apart

Some things just make you want to grin. They’ve got a special something that you can’t help feeling charmed by. Dr. Nefarious’ comically evil laugh is one of those things. Barely 5 minutes into Ratchet and Clank: Rift Apart, I felt a big, goofy, I’m-a-child-today grin creep onto my face, and it stayed put throughout the adventure.

Ratchet and Clank as a series hasn’t had a proper sequel in ages, and part of me wondered if it still had legs. Sure, 2016’s remake of the original game was fun, but could the heroic duo rekindle the magic? The story begins with Ratchet and Clank being honored for their repeated heroism. Legions of adoring fans look on as the pair reenact some of their most famous exploits. Clank also has a gift for Ratchet. He’s repaired the Dimensionator, and he gifts it to Ratchet in a surprisingly touching moment. Predictably though, something sinister is afoot. Dr Nefarious steals the Dimensionator, and the fabric of reality starts to break down. As always, it’s up to our heroes to save the day and repair the dimensional damage.

It’s not at all groundbreaking, and I saw most of the twists coming, but just like a Pixar film, Rift Apart is charming as heck. The puns the series is well known for flow steadily from all directions, with plenty of the bystander flavour dialogue being laugh-out-loud funny. There’s more to it than just a good chuckle though, and Rift Apart does a great job of delivering classic morals like believing in yourself. It definitely drops a few cheesy lines along the way, but it’s always with a wink and a knowing nod.

Cheeky writing doesn’t work without the right performances, and the cast here is very strong. James Arnold Taylor and David Kaye return as Ratchet and Clank respectively, while voice acting legend Jennifer Hale steps in to provide life to Rivet, Ratchet’s dimensional counterpart. She does a phenomenal job with the role, mirroring Ratchet’s persona just enough to know there’s a connection, but also bringing a great deal of lived experience to the character. Along the way, Insomniac’s animation team has done an astounding job bringing the characters to life. Subtle facial expressions can be difficult to effectively communicate in a boisterous cartoon setting, and the result is extremely impressive. 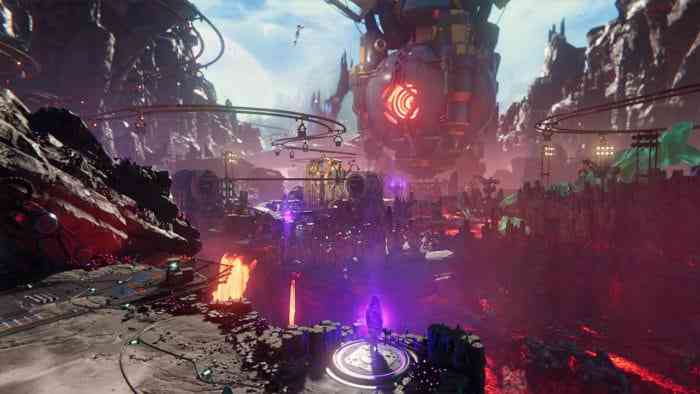 As good as the hero characters are, they’re only a piece of the larger world Insomniac has put together. Each of the locations in the game is really lovingly crafted. There’s an incredible density of things going on everywhere, and each planet has a unique look and flavour without being contrived. I’m always impressed when video game locations are diverse without resorting to the classic ‘well I guess we need an ice level’ method.

Many of the planets have a shocking scale and scope to them. Sightlines are created to play into that sense of enormous scale, and things generally feel expansive even when exploration is limited. I spent hours poking around the various planets, just to see what the various NPCs were up to. They’re hanging out in dance clubs, factories, and monasteries to name a few, and they’re all worth gawking at.

Part of each world’s unique feeling – and I’m shocked to be writing this about Ratchet and Clank – is the outstanding score. Insomniac swung for the fences by signing Mark Mothersbaugh to the project, and boy oh boy did it pay off. Rift Apart’s main theme is absolutely epic, with a fantastic Indiana Jones in Space vibe to it. That main melody pokes its head up frequently, despite drastic tonal changes from scene to scene. The score is whimsical and fun when it needs to be, and brings emotional weight to the most impactful moments in the adventure, but never overshadows the other aspect of the story. It’s truly magnificent. 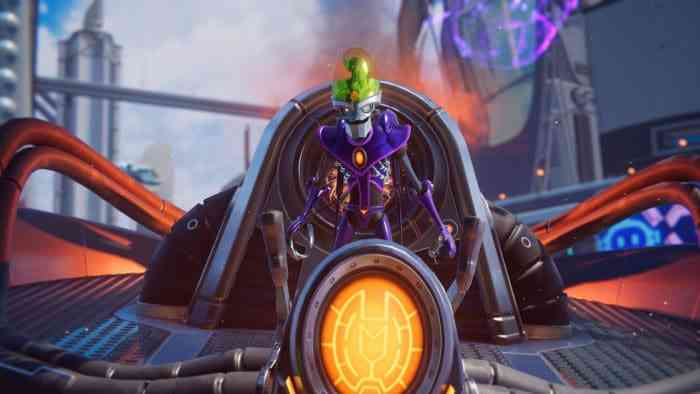 I’ve dropped close to 20 hours on Ratchet and Clank Rift Apart, and I still find it hard to comprehend just how good it looks. Stylistically it’s vibrant and cartoonish, but on a technical level Insomniac has really done something magical here. Objects both near and far are absurdly detailed, with obvious care and attention paid to the smallest details. Details like the very high-quality depth of field effect that’s applied when aiming down sights. Rivet and Ratchet’s fur is among the best I’ve ever seen. It moves believably, and reacts to the environment shockingly well. When it’s raining or a Lombax has just emerged from the water, the fur clumps and mattes down – it’s startling just how close the characters are to prerendered CGI in Rift Apart.

Ray tracing is another highlight feature in Rift Apart’s visual presentation. Sure, reflective surfaces reflect as you’d expect, but the effect is most impactful when it’s applied to rounded surfaces like the windshield of a ship or Dr. Nefarious’ head. Distorted reflections seen in those cases, and especially when they’re on a semi-transparent material are jaw-dropping. I’m sure a deep dive into the way light behaves and surfaces interact could show a few seams here and there, but in motion, this is among the most visually impressive adventures ever created. 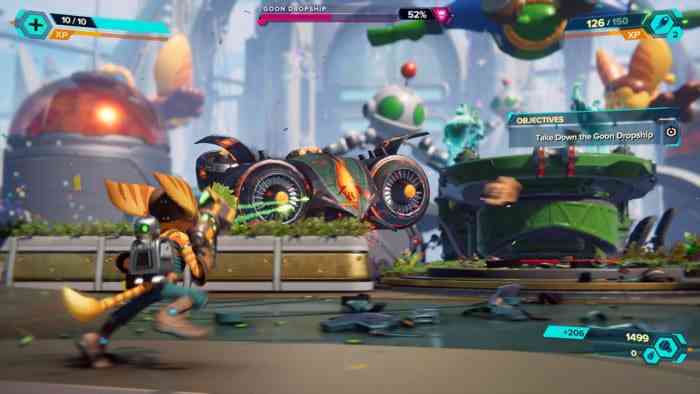 The other real trick up Ratchet and Clank Rift Apart’s sleeve is the PS5’s SSD. It’s fast, right? Yes, and it enables things in Rift Apart that could not have been pulled off previously, at least not without vast amounts of additional memory capacity. Assets are loaded to and from the SSD within the space of a single frame, enabling Rivet to shift to another dimension instantaneously by hitting a Blizon crystal, or to the Topiary Sprinkler to turn any enemy into a shrub in the blink of an eye. Looking through a rift into another dimension somehow took on a new sense of realness, knowing that there’s no illusion.

In the moment, it’s often the sheer volume of particles that struck me most. The engine handles everything with surprising grace, and even the most stressful visual situations where particles and geometry are literally screen-filling have no noticeable effect on framerate. On a few planets with higher amounts of particles in the general environment I did notice a bit of a drop in overall resolution. I’m no pixel counter, but it looks like Rift Apart uses dynamic resolution to ensure consistent performance. It’s not something you’re likely to notice. To my eye, it’s as close as a product can get to locked at 30 fps in the fidelity mode. 60 fps modes weren’t patched in during the review period but based on how Miles Morales handled we can expect similar visual excellence there.

Equally excellent is how Ratchet and Clank plays in combat scenarios. Ratchet and Rivet feel nimble and mobility options like the hover boots keep encounters feeling fresh. Controls rarely get in the way, and clever decisions like the automated strafing feature keep control streamlined. There are a ton of fun guns to unlock and use, and even the ones I begrudgingly purchased turned out to be well worth using. Big guns like the Negatron Collider and Warmonger are obviously effective, but the balance in encounters is such that Mr. Fungi and the Glove of Doom are just as important to success and having fun. Weapons level up with use and can be upgraded using Raritanium found throughout the game. It’s a simple system, but one that encourages use. I found myself relying more heavily on weapons I hadn’t upgraded, just to see what the fully leveled up versions might offer. I won’t spoil any of that, but rest assured they’re worth the effort. 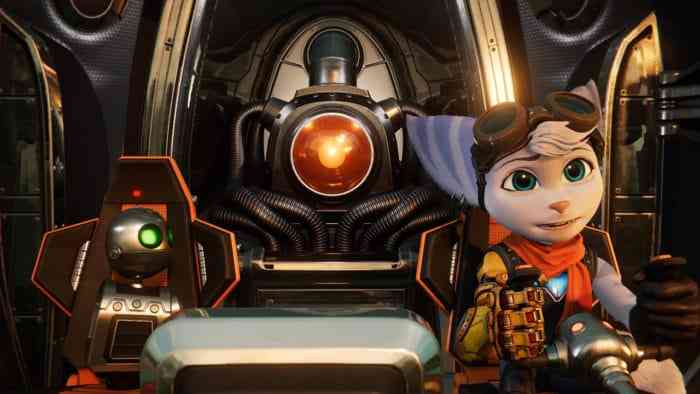 The Dualsense controller is a big part of Rift Apart’s combat success. Most of the weapons make great use of the adaptive triggers, whether that’s The Enforcer firing a single barrel with a half pull and both barrels with a full pull, or the Blackhole Storm allowing you to keep the weapon spun up by feathering a quarter pull of the trigger. It’s extremely intuitive in practice, and engages a different part of your brain in the experience. I never felt distracted from the action or like my ability to control things was affected. Instead, there’s visceral feedback delivered through the controller that generates satisfaction. It’s super fulfilling to charge up the Negatron Collider, dodge several enemies, and fire the beam at the perfect moment.

Traversal is excellent too, though there are imposed limitations on movement I found myself running up against. Fully charging up the hover boots allows for impressively long jumps, and there were a few situations where invisible walls prevented me from getting where I intended to go. Often, a look at the map showed my targets to be background dressing rather than actual places one could go, and those spots were frustrating. 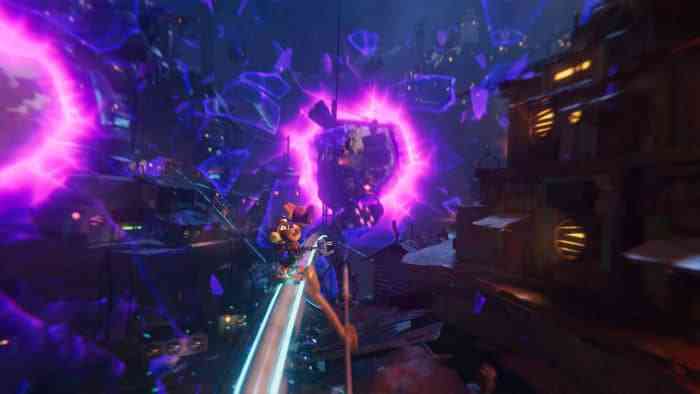 The trouble is that I was looking for more to do during the adventure. Each planet features a side mission and some collectables, but that’s about it. By the time I completed the main adventure, there wasn’t much I’d missed. An Ubisoft map marker-fest this is not, thankfully, but I did crave more exploration and combat. The good news is that there’s a well thought out Challenge mode that unlocks upon completing the story, and that at least scratched my combat itch.

The overall level of polish in Ratchet and Clank: Rift Apart is remarkable, with only a few minor hiccups to report. On rare occasions, an enemy would get stuck on geometry and prevent scripting from progressing, and I experienced one hard crash, though both those issues are slated to be squashed in the day one patch.

Ratchet and Clank: Rift Apart has something for almost everyone. Fast and satisfying combat and gameplay, absolutely jaw-dropping good looks, a fantastic score, and narrative design, writing, and acting that could be plugged right in as the next Pixar film. I felt some feels, grinned constantly, and yes, I’m going to go back and play it again. Right now. 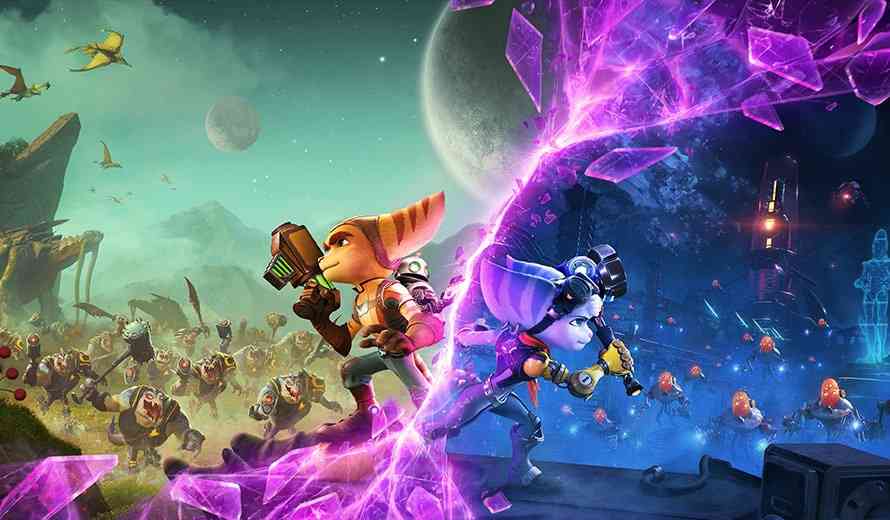 
Win a Collection of the Best PlayStation Games of 2021