Sometimes, it’s ok for a video game to be…fun. It doesn’t have to make pointed remarks about the state of the world or take us on a journey of introspective self-discovery. Chivalry 2 is pure, goofy, hyper-violent fun, the grownup equivalent of a bunch of ten-year-olds yelling at the top of their lungs and beating each other up with foam bats. Well, it’s a little more nuanced than that. 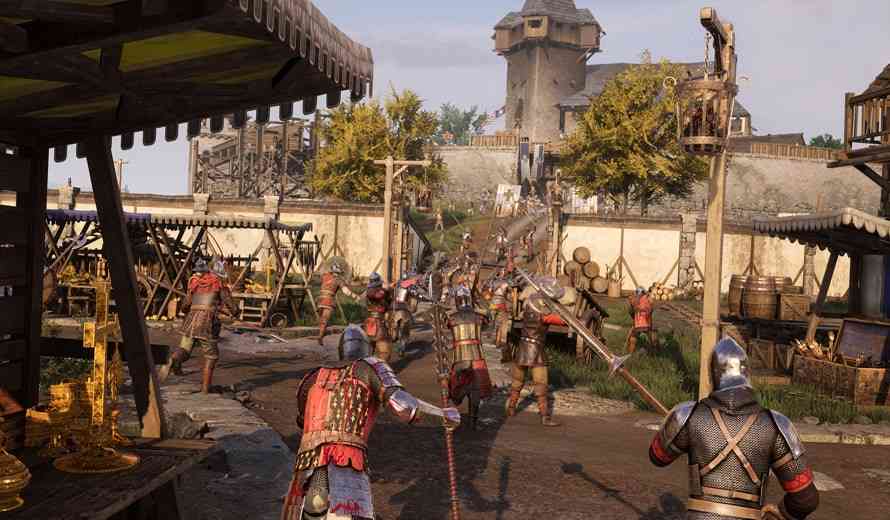 Chivalry 2 does one thing, but it does it well. It’s a sequel to 2012’s Chivalry: Medieval Warfare, based on a Half Life 2 mod that grew into a tongue-in-cheek multiplayer simulation of melee combat from the days of knights wearing plate armor and swinging massive, limb-rending swords. The original Chivalry spawned a genre of sorts, and some of the copycats added elements like story, more “realistic” swordplay, and even RTS unit management. Chivalry 2 ignores all that and takes us back to where it started, only with better and more everything: better levels and missions, better combat, and more weapons and armor.

In Chivalry 2 you play as a member of one of two factions: the “good” Agathians or the rebel Masons and you have a choice of four starting classes: Archer, Vanguard, Knight, and Footman. As you fight with your class’s primary weapon you gain access to subclasses and new weapon unlocks, new armor, and special abilities, though everything is grounded in the “reality” of medieval combat, so there’s no magic or spellcasters or any high fantasy twaddle. Your fellow soldiers can heal you, however, and you have a limited ability to heal yourself during each respawn.

The weapons, and the moves and characteristics of each, are what make Chivalry 2 such an engrossing and potentially lasting experience. There is a plethora of shields, swords, polearms, axes, hammers, and bows and each will no doubt scratch the itch of someone. Some of them are slow and cumbersome but do massive damage while others have immense reach. Some are all-around utility weapons that get the job done with little flash. Players are always free to pick up any discarded weapon from the battlefield, although they might not have leveled up their skills for it. Speaking of battlefield detritus, there is all sorts of environmental debris that players can grab and throw, from severed heads and limbs to barrels and plates of turkey. It might not always make a huge, life-saving difference in combat but it adds a dollop of Python-esque ridiculousness to what could be an oppressively violent game. Ditto the various taunts and battle cries, which definitely walk into the land of silliness and satire and are entertainingly voiced.

Although Chivalry 2’s combat does not attempt to be an historic combat simulator, it definitely demands a great deal more timing, skill and finesse than a purely arcade-like experience might, and the ability to read your opponent’s moves and react appropriately will absolutely require some serious practice. There is a succinct but useful tutorial, really just a refresher course from the first Chivalry, and a welcome offline mode where players can practice and study the maps, objectives, and missions without the humiliation of being bested by humans. Chivalry 2’s combat is simply a very satisfying compromise between fun-stealing fussy realism and button-mashing mindlessness. It seems so approachable that I can certainly understand someone thinking that spamming the heavy attack button is all they need to do but they will realize quickly that there is much to learn. Happily, the game rewards nearly all efforts with some points towards advancement. 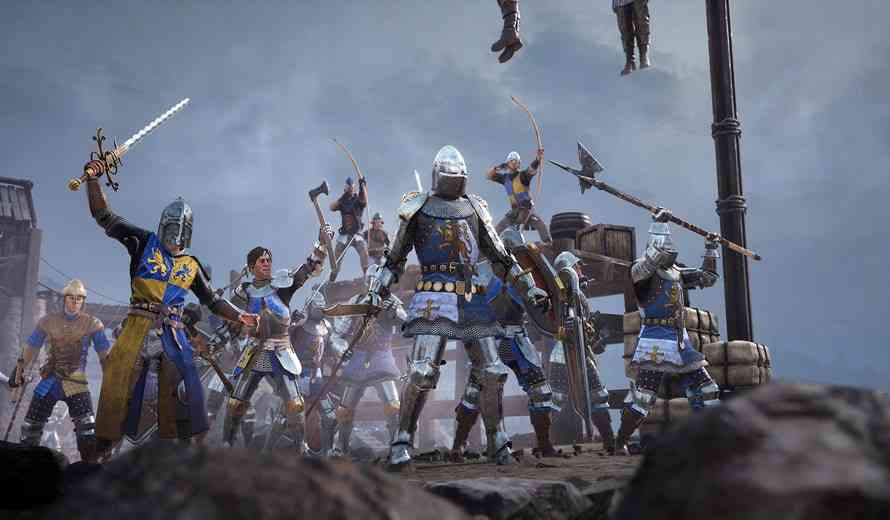 Chivalry 2 is an entirely multiplayer-focused game, with no story to speak of, but a dozen or so 40-or-64-player, objective-based maps that are varied in their environments and challenges. Most of the maps involve multiple objectives and move from countryside to fortified villages to looming castles. Although experienced players of team-based multiplayer shooters will probably find many of the objectives familiar, there are interesting wrinkles here and there, like the player with the highest score in one round becoming a nearly-unstoppable god-like knight in the subsequent match. There are also free-for-alls and straight-up team deathmatch maps and arenas for those who want to just dive in and fight.

The environments are visually impressive and the maps themselves are extremely well designed, but the human faces are disappointingly last-gen, though I suppose it doesn’t matter much as they are hidden by armor almost all the time. The combat animations are fluid and easy to follow, a strong point in a game where there are dozens of knights simultaneously hacking-and-slashing each other to the death, with arrows raining down, seize machinery rolling by, and piles of bodies everywhere. The game’s music is appropriately epic but sparsely used and overall Chivalry 2’s sound design is good, with each massive battle a chaos of weapon sounds and battle cries. I auditioned the final release on both a PS5 and PC, and the experience was comparable, with some texture pop in and a few crashes on the PC side that were absent on the console. Chivalry 2 supports cross play between all its versions right out of the gate, with cross play team building soon to come. Considering that the game was densely populated at launch, there were some matchmaking hiccups but nothing significant.

Chivalry 2 marries ridiculously violent melee combat to a tone that completely undercuts any notion that the mayhem should be taken seriously. With that out of the way, it provides accessible but ultimately challenging swordplay and the promise of nearly endless multiplayer fun. It doesn’t try to do everything, but instead picks a lane and absolutely owns it.

Among Us Finally Launches Onto Consoles

I Pledge Allegiance to the Republic – of Riders, That Is
Next Ninja Gaiden: Master Collection Review – To Know Neither Good Nor Evil
Previous Ratchet and Clank: Rift Apart Review – A Riveting Adventure