I Pledge Allegiance to the Republic – of Riders, That Is

Back at this year’s virtual E3, Ubisoft showcased what looked to be a pretty exciting extreme sports competitive game: Riders Republic. Featuring real-world sports like mountain biking and snowboarding as well as fanciful events like jet-powered wingsuit races, Riders Republic is a lot more than just a series of disparate events. I spent some time with the closed beta and was impressed by both the depth and breadth of the title as well as its sense of humor and fun.

Although the beta event only previewed a couple of sports in-depth, Riders Republic will feature a wide range of challenges in the snow, on the trails, and even in the air. It’s all with the breathless feel of a televised extreme sports competition, including a lengthy campaign geared around earning the player a steady stream of new equipment and most critically, improving the skills needed to win races. There’s also an open-world component as well, where you can explore the varied natural environments, practice your technique and earn credits.

The beta gave us a taste of what the game’s career mode will be like. You begin by playing through a sort of highlight reel, where you get to sample (without real penalty or reward) all of the sports you’ll have access to — mountain biking, wingsuit flying, rocket-powered wingsuit flying, trick, and downhill skiing, and snowboarding — before landing in Riders Ridge, the hub area, and creating a character. You meet a couple of mentors in the village, including an old, one-time extreme sport superstar who becomes your coach and cheerleader. Riders Ridge is where you can upgrade your clothes and gear, practice tricks, and gather with your friends for several team-based PvP trick contests. 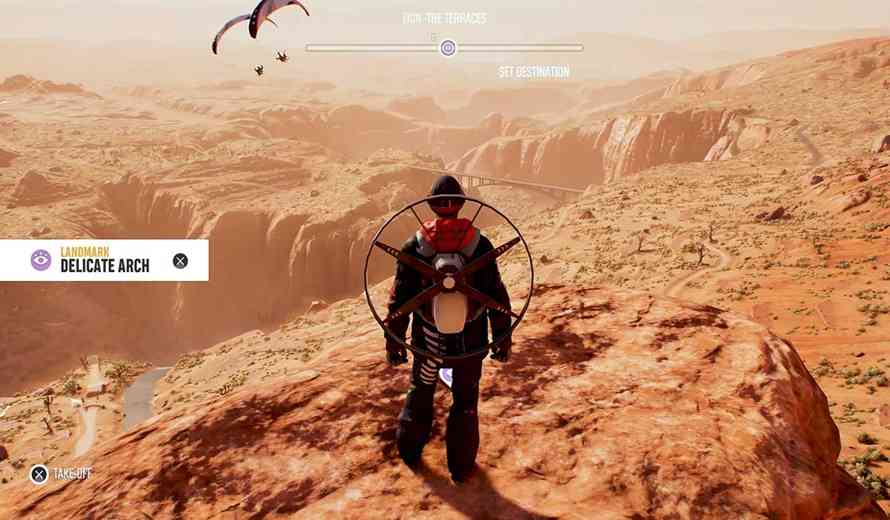 You start the career mode on a mountain bike and race through several events around the map, each race earning you a new and better-licensed bike. Some of the races are in mixes of snow and dirt and some are closer to road races so you need the appropriate machine. After a few races, you take a detour to the snow and start to learn some tricks riding on snowboards and skis. Then it’s back on the bike for the real-world Red Bull Rampage championship, after which the beta opens up for freeform exploration, dropping into races and events around the map, and looking for secrets scattered around the huge open environments. You can bike, snowboard, snowmobile, or hang glide, switching easily between traversal methods on the fly. The world’s your playground and even when you’re just having undirected fun you can earn points for doing sick tricks. The culmination of the career mode is participation in the Riders Ridge Invitational, a multi-sport event in which all the player’s skills are tested.

Riders Republic is set in seven vast national parks and regions of the western United States, including Yosemite, Grand Teton, Mammoth, Bryce Canyon, Sequoia, Canyonlands, and Zion, each incredibly detailed topography emphasizing verticality, scenic beauty, and the potential for downhill mayhem. Zoom out and the map reminds you of many Ubisoft open-world games, with hundreds of markers and points of interest, plus thousands of players represented as little moving dots. Zoom in a little and those dots turn into skiers and cyclists in motion. It’s pretty impressive and even in the beta, the framerate was stable with very little scenery pop in. 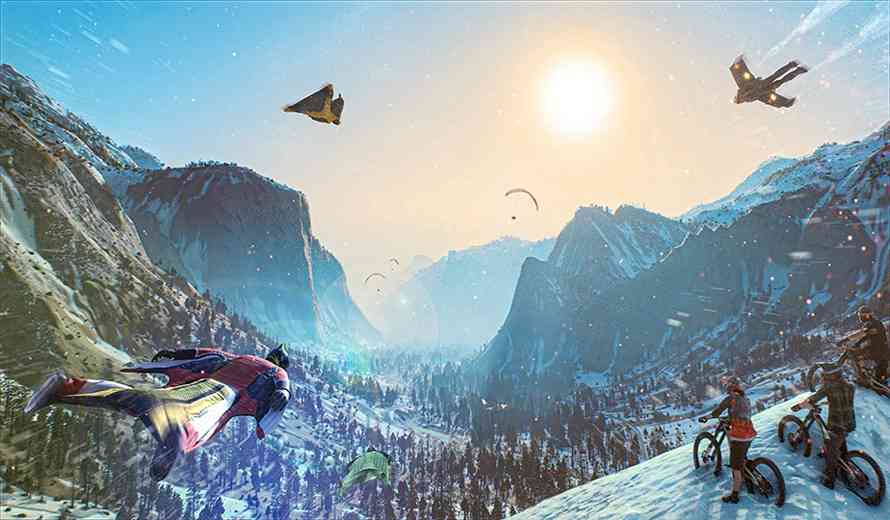 While the extensive career mode is at the heart of Riders Republic, it’s entirely possible to spend much of your time in other activities, like side quests in an RPG. You can participate in 6×6 team multiplayer in the Tricks Battle Arena, you can join in timed events that pop up from time to time, and there are large-scale races involving dozens of participants.  Once you unlock the map you can go anywhere, either via fast traveling to a marked race event or by plotting a course and skiing, biking or gliding there.

I’m of the age, level of coordination and physical condition where riding my electric bike to the corner market is my version of an extreme sport, so I can’t speak with authority on the authenticity of the experience in Riders Republic. I can say that, relative to other arcade style racing games, the bikes, snowboards, wingsuits and other modes of transportation all control pretty intuitively and precisely, requiring a light touch on the thumb sticks and triggers even at the most forgiving setting. Is there a sense of dangerous, slightly out of control speed as one is careening down a mountain path or performing gnarly mid-air tricks? Absolutely there is, and Riders Republic’s sound design helps stick the landing. It’s subtle, but effective, whether the crunch of snow beneath the snowboard or the disconcerting suspension rattle when the bike slams into the ground after a particularly spectacular jump. In a race it’s all accompanied by the whoops and hollers of the other riders, joyously defying the laws of gravity and the improbability of surviving the drop from a canyon wall to the floor below. Although gamepad controls are remappable, it comes with both Racing and Trick controller layouts that are easy to switch between depending on the goal of the event.

There’s certainly a sense of fun in Riders Republic, even if everything is hyperbolically EXTREME almost to the point of silliness. The dude that becomes your mentor definitely seems poised on the precipice of parody, his dialogue a string of benign bro-nacular that had me rolling my eyes until I remembered that I live in an extreme sport paradise, and I know more than a few parasailers and extreme sport enthusiasts that could have been his model. The soundtrack of licensed high octane pop and rock helps give the game that appropriate Red Bull (TM) fueled energy. 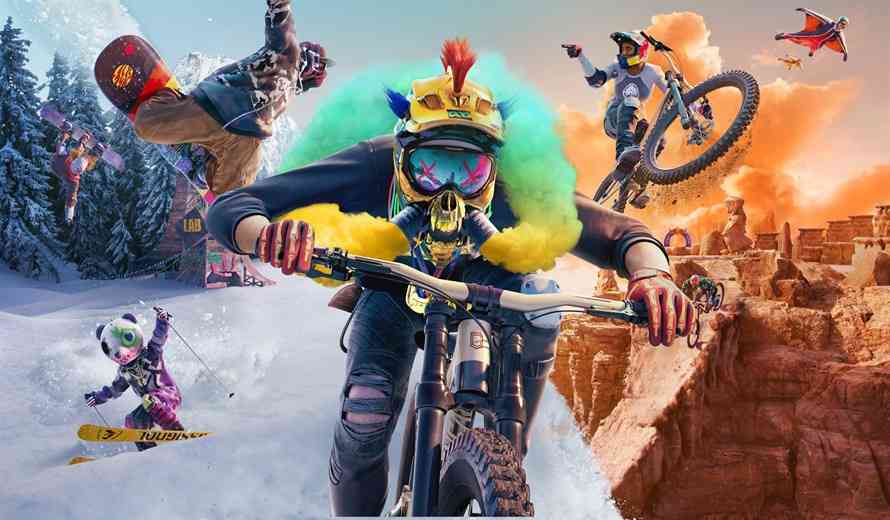 What Riders Republic has going for it is variety, at least in terms of the natural environments and ways to experience them, whether through the career mode, the multiplayer challenges or just using the world as the safe-from-concussion-and-spinal column-injury playground you always dreamed of. I’ll never drop over a canyon ridge on two wheels or jet-glide my way down a mountain slope in real life, but thanks to Riders Republic I can at least know what it would be like, minus the cost of the gear and inevitable hospitalization and physical therapy. I was impressed with the open world and flexibility of approaching it through both the races and less directed exploration, and I look forward to experiencing the complete game later this year.

***PC beta access code provided by the publishers for preview*** 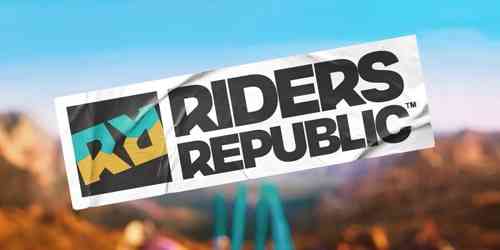 
Ex-developer Explains Why Fable Development Has Been Slow

Why Elden Ring is Better Than You Thought