Astria Ascending Has a Beautiful and Fantastical Setting

With the help of some Final Fantasy veterans, Astria Ascending is an upcoming JRPG to keep your eyes on. From its drop-dead gorgeous visuals to its score by veteran composer Hitoshi Sakimoto (most famous for Final Fantasy 12 and Vagrant Story), entering the world of Orcanon is a treat for the senses.

From the outset, you meet a full party of 8 heroes known in this world as the Demigods. You play primarily as Ulan, the leader of the bunch, whose fun but serious personality pull the world forward on your adventure. Each hero is lovingly detailed, like a piece of concept art come to life. 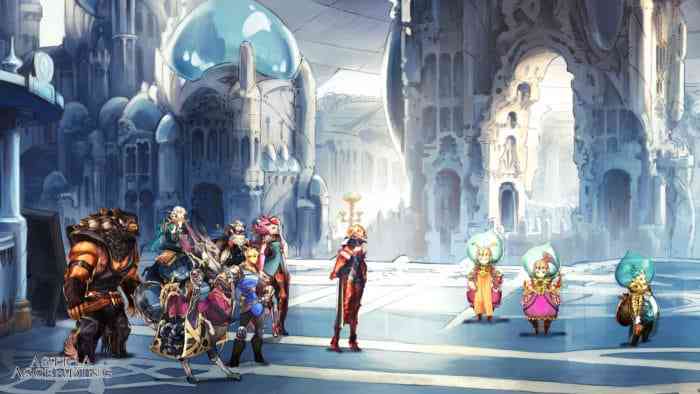 Astria Ascending is a 2D JRPG in a similar way that Ubisoft’s Child of Light was. You control a character on a 2D plane in a lavish and beautiful hand-drawn world. You explore, talk to characters and fight monsters known as the Noises. The story is grand from the get-go, and while it didn’t pull me in during the first few hours, it does set the stage for some interesting arcs and world-building to come, which kept me intrigued to see what more it has to say.

Combat is your standard Final Fantasy affair with you and opponents transitioning to a battle screen where you take turns pummeling each other. In a cheeky surprise, Astria Ascending includes something they call Focus, which if you’ve played any of the Bravely Default games or Octopath Traveler, you’ll be right at home here. Focus lets a hero skip a turn in order to bolster the attack or maneuvers used by the party coming up. In its own unique take though, these stacks of Focus do not persist, so you have to use them quickly or you’ll end up wasting a turn.

While it was too early to say for sure, combat was fun and often not too difficult in the first chapters. Each hero has their own unique set of abilities or magic to wield in battle and it’s fun swapping different heroes in and out to learn what they do. Each hero also has a talent tree of passives and abilities to buff up when they level, so you can begin to feel the depth the game will have ahead. Not to mention new gear and items to find and equip.

As a fun aside, Astria Ascending includes its own mini-game known as J-STER, which is a hexagon coin game where you place tokens to try and flip your opponent’s token by exploiting the denoted sides of each hex. It’s tricky to get the hang of but I could see myself definitely tinkering with it on my adventures and trying to build up my collection of tokens. 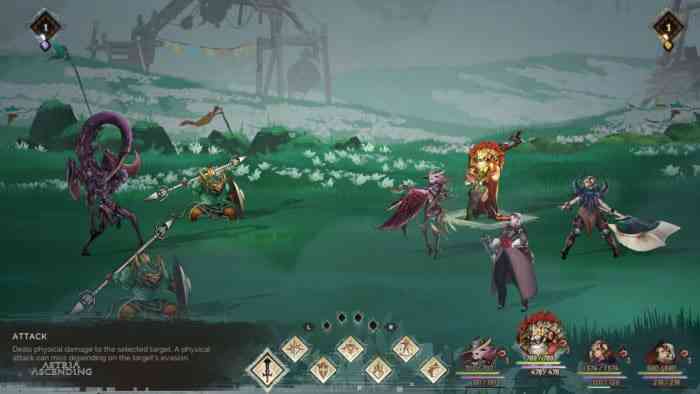 The visuals are outstanding. Everything has a painterly quality, seemingly hand-drawn and slightly animated when not in motion. Seeing the non-human party members is a treat (there are quite a few of them this time) as each has a unique silhouette and aesthetic that does much to flesh out the world. Environments are lavish as you move through different cities and dungeons, playing often with foreground and background elements.

The sound design, while not quite as elevated as the visuals, is serviceable with the music being the chief standout. The background music and b battle music echo back to the olden days of Final Fantasy and I’m curious when the full game releases which tracks will be chased down on Spotify or Youtube.

I enjoyed Astria’s beautiful world, whimsical music, and both the English and Japanese dubs. Which language I’ll play when it releases I’m not sure as they both sound good, but I’m excited to spend more time in Orcanum learning all there is to know in this fantastical setting. Keep your eyes peeled on Astria Ascending when it releases at the end of September.

Chrono Cross: The Radical Dreamers Edition Review – Weird Worlds
Next I Pledge Allegiance to the Republic – of Riders, That Is
Previous Space Life is Messed Up in Starmancer