Hey, everyone knows Puzzle Bobble — you remember, that casual bubble-popping Tetris-like that we’ve all spent hundreds of hours playing in one form or another over the years, but none of us will admit to ever having heard of? And yeah, it’s pretty fun. So you know before you even play it that Puzzle Bobble VR: Vacation Odyssey isn’t going to be terrible. Whether it’s a great game… well that’s another story. And whether it even needed to be made in VR? Even more questionable.

But as I said, there’s plenty of fun to be had in this game. It’s a lot like classic Puzzle Bobble, but your 2D view and straight-arrow aiming are replaced with a 3D presentation. You’ve now got a three-dimensional cluster of colored bubbles to pop, and the cluster rotates depending on where you hit it. Your goal in Story Mode’s 100 levels is to eliminate the outer layers of the bubble cluster and then finish with last, core bubble at the center. Unlike the precision shooter you know from old Puzzle Bobble, you’re given a slingshot gun to shoot with. It looks really cool, with little details like machine parts that made me smile.

The new 3D mode also brings some unexpected strategy to the original formula that I didn’t expect. Because you learn to decide where you should shoot based on where you think it might rotate. So you now have to plan things out to an extent that you never would have to in classic, 2D Puzzle Bobble. There is also the option to use special abilities like hot peppers (which enable you to breathe fire), which you can buy with coins you pick up over the course of the game. 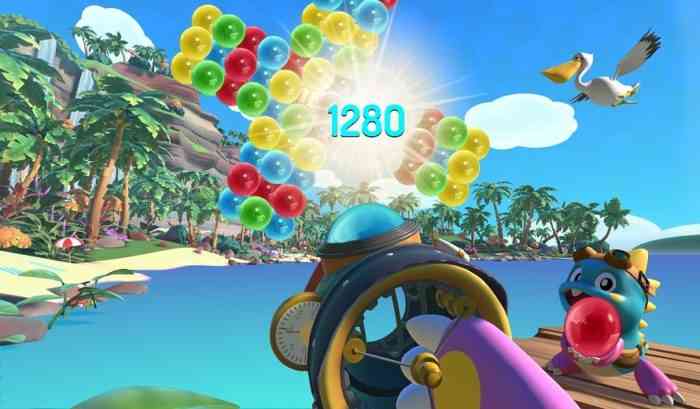 In addition to the admittedly fun and satisfying experience of using your slingshot gun to pop all those bubbles, Puzzle Bobble VR: Vacation Odyssey adds twists like time or shot limits to give you more challenge. This, combined with some complex shapes, means some levels can get tough, which would be fine in 2D but in VR presents some problems.

First of all, the aiming and shooting in Puzzle Bobble VR: Vacation Odyssey suffers from a common VR shortcoming: it’s too twitchy. Whereas in a 2D game, your default position is stationery, in a VR game like this your gun’s resting position is determined by wherever your hands are. And aiming is done by using both hands like a bow and arrow. So, the bottom line is that unless you are able to hold yourself as stiff as a statue, your gun will be frustratingly difficult to keep steady. In game terms that means your shot won’t always go where you want. And secondly, I don’t mean to sound whiney, but it also gets pretty tiring to hold up the gun/controller for long periods.

But there is lots of content to Puzzle Bobble VR: Vacation Odyssey, especially for a VR title, and you’ll invest a good 3 to 5 hours into Story Mode alone before you’re finished. In addition to that, there’s an Infinite Mode for all the masochists out there, and even a PvP online mode that pits you against another human with each of you trying to clear levels in a racing competition. Like a lot of VR titles I’ve played though, I found that it was really hard to get a match. Either this is just too new of a game, or the PvP mode just isn’t really very popular.

So, let’s talk about the VR thing. Yes, Puzzle Bobble VR: Vacation Odyssey is a fun little game, but like some other games I’ve reviewed, I just don’t see why this needed to be made in VR. You’re standing in one place, meaning you’re not interacting with a 3D environment that you can explore and immerse yourself in (which on the bright side means that the VR comfort level here is great). Don’t get me wrong, the environments are fine, with cute little scenes of tropical beaches, picnics in the park or sun-bathed deserts. But VR’s 3D aspects don’t really add anything to this game’s experience that couldn’t also be conveyed in a non-VR format.

Overall, Puzzle Bobble VR: Vacation Odyssey is a decent title and a fun time for a solid few hours of casual enjoyment. You can play it standing or sitting, which is a plus. But it’s got some annoyances that will get on your nerves after a while. Besides the finicky aiming mechanic, there isn’t really the mind-blowing immersion that we look for in a great VR game; this is an experience that would have been pretty much the same if it weren’t in VR: a casual, amusing little puzzler that you pick up for short periods and then put away. When you’re asking players to strap on a fairly heavy VR headset for longer periods, you really need to give them a more thrilling and unique experience than this.

** An Oculus Quest game code was provided by the publisher **

Medal of Honor: Above and Beyond Review – Bringing the Fight to VR