While you would probably be wary of a movie tie-in video game (and you’d be right to be), The Angry Birds Movie 2 VR: Under Pressure at least boasts the pedigree of deriving from an actual video game franchise. So you might expect a little bit more than the standard licensed “shovelware” … aaaand you’d be wrong. Well, to be fair, The Angry Birds Movie 2 VR: Under Pressure isn’t a complete waste of time; it’s not broken and there’s a bit of fun to be had, especially for a group of younger players. But even that demographic will struggle to stay engaged for long, I’m sad to say.

The Angry Birds Movie 2 VR: Under Pressure bears no gameplay resemblance to the original Angry Birds game, which might come as a surprise and even a disappointment depending on who you are. Instead, gameplay is very much in the vein of Overcooked — work as a group to complete your objectives within a set time, with each individual responsible for their own part in a coordinated, increasingly hectic environment. Everything takes place on board a submarine, with you trying to catch treasure-chests with plungers and earn points before the time clock runs out. The scenario is apparently set in between scenes from the actual Angry Birds 2 movie, as is explained to you in a long scene at the beginning.

In this team-based game, each player has a particular role. One player is the Captain, and wears the PSVR headset. They are the only player who sees out the sub’s window, and must shoot plungers, using the X button, at treasure chests along the on-rails underwater route. Reeling the chests in by spamming X, the Captain must then throw the treasure boxes over to the sides of the deck, using an electromagnetic gun controlled by R2, to earn points. Other players who join see only the TV screen, and their non-VR game view is of an overhead of the floor of the sub. They help to make the plungers and fix the machines so that the Captain has a ready supply at all times. As the clock ticks, the group must perform all their assigned tasks and get as many points as possible before the end. Then, one to three stars are awarded (Angry Birds-style), depending on your success.

That’s pretty much it for The Angry Birds Movie 2 VR: Under Pressure. It’s a simple game, and easy to pick up and play at first. After a few easy levels, the difficulty ramps up (as you’d expect), with newly-introduced factors like exploding TNT crates, junk that needs to be recycled, and so on. Before long, even experienced gamers will be sweating to keep their heads above water, even if you’ve got a whole team of humans on board. The cutesy presentation of the game implies that it’s aimed at kids, but I would guess that younger players will struggle to get very far, especially with the amount of coordination needed.

It is all mildly entertaining for a while, especially as something for a gang of friends to play on the couch, but The Angry Birds Movie 2 VR: Under Pressure is just too repetitive to keep you hooked. There isn’t enough variety in the gameplay to sustain interest, and even with a group of people the novelty wears off quickly. And I definitely would not recommend this as a single-player game; you can actually play solo if you want — you can switch roles with the Triangle button and do everything on your own — but you will run into severe challenges very early on as you try to do multiple things at once without much time. I was able to one-star many levels this way but it just felt wrong and maybe even a bit sad, like playing chess against yourself. 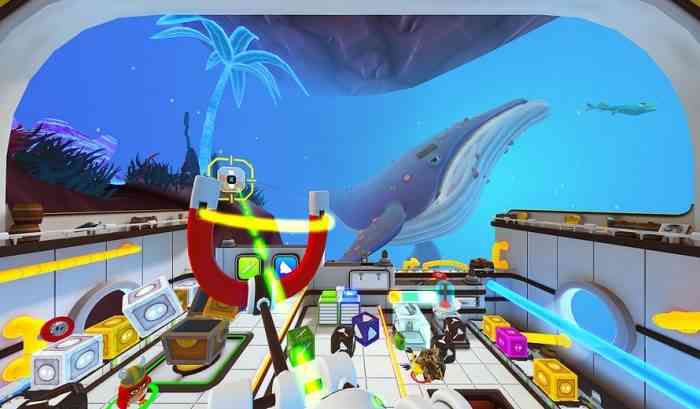 VR feels totally wasted in this game, and frankly unnecessary. There seems to be no added functionality to the Captain having the VR perspective, except maybe the fact that they are able to see more than the other players — which doesn’t add any extra challenge or intrigue like it did in Keep Talking and Nobody Explodes. And visually, given your stationary position on the sub deck there’s none of the “wow” factor usually associated with 3D gameplay. It felt like The Angry Birds Movie 2 VR: Under Pressure just threw in the VR element for the sake of it, or to take advantage of the fact that there aren’t many VR games for kids right now. Either way, as someone who has played many great PSVR titles — many of them within just the last few months — I wasn’t impressed with the lazy and unimaginative way The Angry Birds Movie 2 VR: Under Pressure incorporated VR.