Gaming with headphones on the Xbox One can be challenging.  There is a minuscule selection of true wireless headphones (as of writing this review the Astro just announced an Xbox One specific set of A50’s) as the majority of headphones available connect to the Xbox One through an adapter that is plugged into the Xbox One controller.  As it stands there are only a couple options for anything past stereo sound available on the Xbox One.  Many don’t think that stereo sound can be that good, but if you have a good quality stereo headset the results are noticeable, and with the Polk 4 Shot I was pleasantly surprised with what I heard.

There is a good chance that if you are reading this review, and are aware of all the headsets out on the market for the Xbox One, you no doubt know that the 4 Shot has been out for awhile.  It was not until recently that we here at COG got a chance to finally meet with the PR from Polk and form a relationship in order to review some of their products for you.  Early reviews for the 4 Shot were average to say the least, but since that time there have been controller updates, driver updates, as well as the addition of a new HD microphone for the 4 Shot.  All of this adds up to a headset that sounds pretty good.

Out of the box you get quite a few little goodies.  You get the headset itself, the headphone adapter for the Xbox One controller, as well as two audio cables.  One cable has the new HD microphone and the other cable, the one without the HD microphone attached to it, allows you to listen to music from a tablet or phone, as well as take calls.  Our review headset’s colour was Nova Blue.  It is actually a neat colour as the speaker cups are dark blue with a light blue accent. The speaker cup’s foam is wrapped in faux leather that is white in colour, as is the foam that wraps the bar that goes over your head.  All in all it doesn’t look cheap at all and the colours are nice. 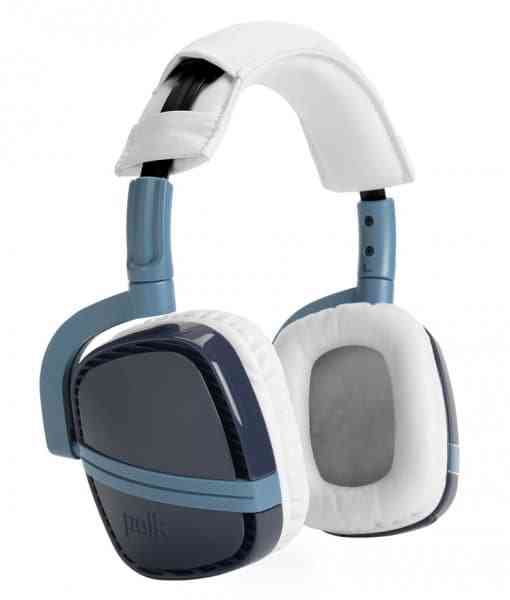 I put these headphones to use playing on my GAEMS Vanguard unit.  I mostly played Diablo III Ultimate Edition, Destiny, and Forza Horizon 2.  I have to say that these three games sounded great.  What is also notable about these games is they have one thing very much in common, and that is lots of great music.  I generally use Microsoft’s own Xbox One Stereo headset when I am on the road or playing at home on my GAEMS unit.  When I started using the 4 Shot the first thing I noticed what how much better music sounded, acoustically speaking.  Diablo III’s music was more rich and clear sounding, and the symphonic and epic music of Destiny was just as good.  Of course each game’s weapons, creatures and environmental sound were noticeable; everything just blended nicely.  As for Forza Horizon 2, the sounds of cars were loud and clear, the sound effects were solid, and the wide variety of music from the in-game radio stations was equally as impressive.  From classical music, the bass-tone heavy music, to alternative and hard rock, it all was impressive to say the least.

While on a road-trip a couple of weeks ago in San Francisco, I took the 4 Shot headset with me and I chilled in my hotel room ready for bed.  I fired up Songza on my Surface RT and listened to some bedtime techno.  Yes, that is one of the choices late at night.  The bass heavy and electronic sounds were fairly diverse, and they sounded better then I had hoped, especially when I turned up the volume.  There was little to no distortion at the higher volumes, which speaks of quality given that cheaper made headphones start to distort and crap-out when pushed louder.   What I am getting at here is that musically I really noticed that no matter what the genre of music was, whatever you throw into the earphones, sounds very decent.

The 4 Shot has two microphone options.  The first is a built in retractable near-field microphone that sits in the left speaker cup.  The other microphone is an HD Microphone that attaches to the headset via a 3.5mm jack on the right speaker cup and then into the Xbox One headset adapter.   The HD microphone is an upgrade and was added to the headphones after they were released to the masses and Polk listened to customer input. The added HD microphone is ‘da bomb’ although it can be a little too sensitive at times.  For example, when gaming online with a friend of mine who purchased a set of 4 Shots for him and his wife during PAX Prime, the HD microphone on his headphones picked up the voices in his headset now  rebroadcasting what he was hearing.  Now that is pretty impressive and annoying all in one fell swoop.  I did try gaming with the built in retractable microphone, but most who online with me heard the difference right away and asked that I put the HD microphone back on so I could sound clearer.  The retractable microphone is a great concept, but it’s not as clear as one might want and is not really suited for gaming. 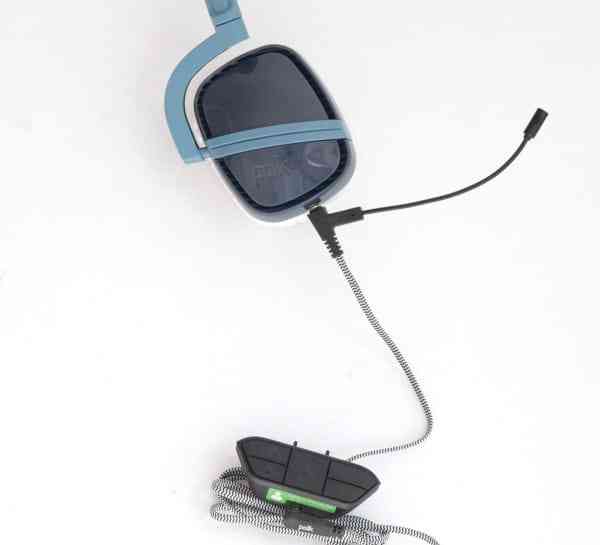 As noted above, the headphones come with a cable for listening to sound only, and not gaming.  This can also control your phone.  While I didn’t use them on my phone, all the music via Songza on my Surface RT was, as mentioned, very clear and distortion free.  Same with my library of albums on my iPod Nano. From hard rock to techno to top 40, everything sounded pretty good.  I also watched a few movie clips of various movies via Netflix on my Xbox One and my Surface RT to hear how a things would sound, and I have to say that even with the streaming service’s compression I have no complaints as dialogue was clear and sound effects where noticeable.  Again, everything sounded fairly balanced.

In regards to comfort, I have worn the 4 Shot for up to 4-5 hours a play session, and at no time did they feel uncomfortable.  And as I always mention when reviewing a headset, I’ve got a fair sized head too.  The faux-leather wrapped foam did a good job of keeping some outside sound out, but I still could hear if anyone in the room wanted to get my attention as they yelled at me.  I didn’t find my ears heating up too much either.  If I took a break the headset allows for the speaker cups to lie flat, which to some may not mean much, but to others like myself, this is a great option as I can just put the headset around my neck and allow the speaker cups to like on my upper chest area.

All in all I have to say that I was happy to have the opportunity to review these headphones when I did.  The addition of a new HD Microphone and the constant controller updates, which assist in improving sound in headsets, since this headset released allowed the 4 Shot to really shine and helped heighten my enjoyment of it.  Although the MSRP is $129.95 it has been as low as $100 on Amazon.  If you’re considering a new headset for your Xbox One and phone/tablet music listening, take a close look at Polk’s 4 Shot Xbox One Gaming Headset as it deserves your scrutiny.

SteelSeries Has Announced New Additions to the Arctis 7 Line of Headsets
Next Fluster Cluck Review – What’s in a Name? It Seems Everything This Time Around
Previous Styx: Master of Shadows Review – The Goblin Thief is a Jack of All Trades but Master of None