Developed by Spearhead Games, Omensight is the spiritual successor to Stories: The Path of Destinies set in the same overall world but with a wholly new cast of characters. Continuing the theme of manipulating time, Omensight takes it one step further with its murder mystery approach. Players take the role of the Harbinger: a prophesized warrior said to appear before the end times and mistakenly assumed to be the cause of it. With the kingdom of Urralia in peril of Voden – a massive serpent-like creature who is the embodiment of the void come to destroy everything – it’s up to the Harbinger to manipulate time and history to discover why Voden has arrived and how to prevent the total destruction of everything.

At the outset of the game, players are shown the ropes with the basic combat and exploration tutorials. Along the way, you’ll encounter the key figures of the story: Ratika, Ludomir, Draga, and Indrik. The narrative feels a bit jarring at first, dropping you in the midst of a rebellion led by Ratika and Ludomir against Emperor Indrik and Draga, his loyal general. Once Voden attacks, the Harbinger is summoned by a mysterious Witch to the Tree of Life, a place that must remain safe from Voden at all costs. You’ll learn quickly that the Godless Priestess, Vera, was the only one keeping the world-ending creature at bay yet someone has murdered her.

It’s All About That Time Travel

This is where the key aspect of the game comes into play: Time travel. The Tree of Life will serve as your central hub; a place to level up, unlock abilities and head back out into the world. You’ll be able to tag along with each of the key characters through their last day of life to uncover clues about what happened to the Godless Priestess Vera, and with each morsel of information come closer to saving the land. This becomes the meat of Omensight’s replayability – it relies on you going through the same missions and the same locales several times, but each one offering a different outcome or path. While it sounds repetitive, the progressive changes with each encounter are enough to keep the story moving along at a nice pace. 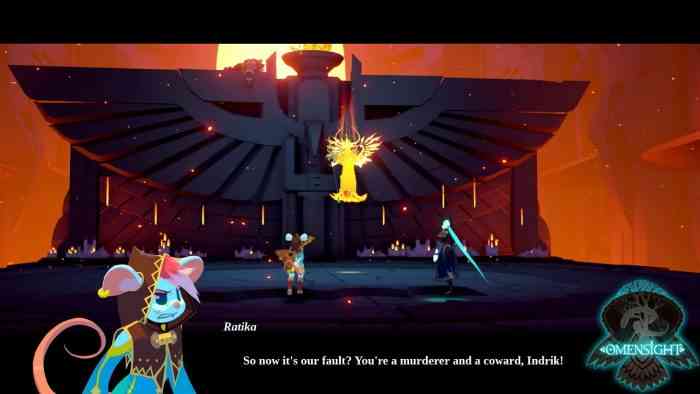 It was also nice to see that when I had completed all there was to do in one narrative, as with Ratika’s story at the time, I was given the option to jump to the branching point in the mission so I could immediately make the opposite decision and learn from the new outcome. This time mechanic is a balancing act that Spearhead Games learned from and fine-tuned, trying to create a solid and cohesive mystery while having each mission play out as something different. It’s interesting to see the multiple paths and options open up to you as the game progresses, however overall the game feels small. I realize the game takes place over the course of a single day and the characters are in one central location, but at times it feels like a missed opportunity to limit the scope of the beautifully created world.

Each of the characters you encounter has some great detail put into their appearance from rivets in armor to patchwork on clothing, so it’s a little disappointing when the Harbinger seems so bland. You’ll often be referred to as ‘she’ or ‘her’ so evidently the Harbinger is a female, but the lack of detail which I assume is to reinforce the sense of a higher being just doesn’t quite hit the mark. It would have worked better had the Harbinger been androgynous or simply given a real identity. With all the characters in the game being some form of an anthropomorphic animal, the question remains: what would the Harbinger be? 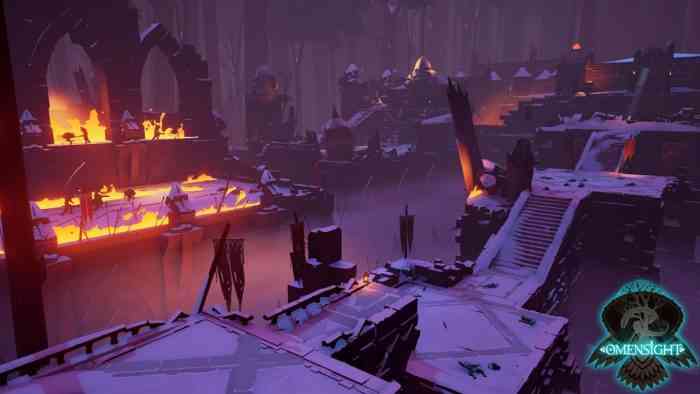 When it comes to the gameplay and controls, the combat is basic: light attack, heavy, dodge, and jump, with a few special abilities to unlock. Movement and combat handle fairly well; however, when platforming the Harbinger’s shadow doesn’t appear until they are right above the ground, making some of the leaps over a chasm a pitiful death from simple misjudgment.  Each of the accompanying characters will offer a double team maneuver however they don’t offer much in the way of variety, however retaliating against an enemy with an ally nearby will see them jump to your side for a double attack. Perfect dodging will slow down time and can feel fantastic, however, the dodge mechanic feels heavy at times, often leaving me open to multiple attacks from other enemies. Each strike by the Harbinger feels powerful, but just a half-beat too slow for my taste. It doesn’t adversely affect the experience, but it’s noticeable.

Omensight is an enjoyable indie adventure with a compelling murder mystery that unravels several layers of depth and deception. Replaying levels and altering events of the game can be interesting if a bit repetitive as you experience the same locations and areas with each of the supporting cast members. Omensight’s heroes are well rounded and fleshed out characters, each one feeling distinct and no single character feeling like the hero or the villain in this story, and despite the land being in the midst of war, they did a fantastic job creating a situation where the Harbinger – meant to take no sides – clearly has no favoritism. While neither side feels right, they don’t feel wrong either. While a little heavy-handed in combat, Omensight learned from the mistakes of its predecessor and has created a tale well worth telling. 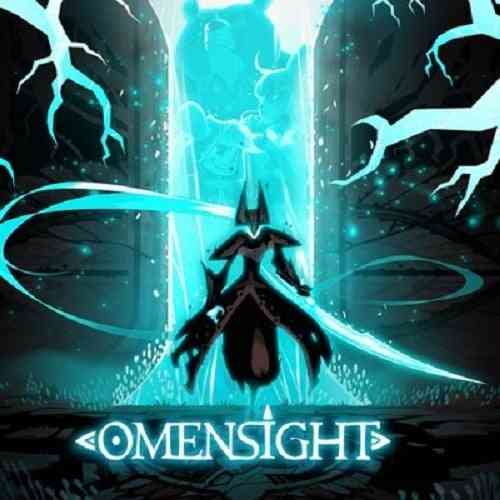