Hyrule Warriors: Definitive Edition Review – A Must Have for Zelda Fans

Link and company are back on the scene with the most content-complete version of the well-received title Hyrule Warriors. The Definitive Edition packs an absolute boatload (at least three King of Red Lion’s worth) of content that would put most modern titles to shame. Packing everything featured in both the Wii U and 3DS versions of this game into one portable package, Hyrule Warriors: Definitive Edition makes a very strong case as to why its worth revisiting one more time.

Hyrule Warriors: Definitive Edition adopts the tried and true Musou format of Dynasty Warriors fame. You pick one of the many unique heroes plucked from The Legend of Zelda’s expansive universe, each complete with unique abilities, play-styles, and a whole mess of customization options. More than one familiar face is yours to choose out of the gate, but there are even more characters to unlock on top of this, adding to what is already a fairly well-rounded roster. From Skyward Swords’ Fi to one seriously badass rendition of Ganondorf, you can play who you want, when you want. Between the wide range of great characters to a rich variety of game modes, Hyrule Warriors gives you some serious bang for your Rupees. For those who are just coming into this game for the first time, you ‘ll be practically flabbergasted at how much there is to do.

Some Serious Bang for Your Rupees

There’s your standard story mode, in which Link, Zelda and Impa enlist the aid of Lana, a new face to the franchise, to help combat Cia, another newcomer, and accomplice of Ganondorf who seeks to bring him back to life once more to do what he does best. It’s pretty standard in regards to your usual Zelda story, but it’s paced well enough that you will want to see how it ends across the fifteen hours it’ll take you to breeze through. Don’t be fooled though, as that’s only the beginning of the near hundreds of hours you can wring out of this game. Adventure Mode is one of the real highlights, serving up a variety of unique maps, and their own difficulties to deal with. One I particularly enjoyed was the Termina map, where you had to be wary of the infamous “72 hours remain” to clear it before you were destroyed by the moon from Majora’s Mask. There are also modes focused on other popular titles like Twilight Princess and Wind Waker and each one feels fresh enough that they are worth delving into. I really can’t stress just how much content there is with this game. Even if the musou format may get a little tired at times, Hyrule Warriors throws enough at you to keep it engaging. 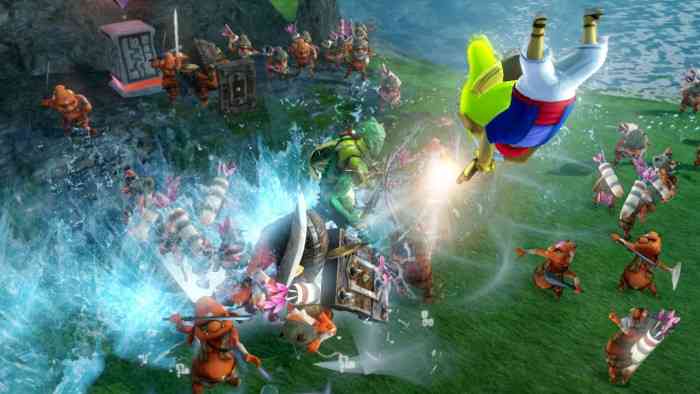 While some folks may roll their eyes when they hear the phrase “Switch port”, let’s not forget the Wii U version didn’t quite meet expectations. Suffering from some serious performance issues, the Wii U version of the game was by no means a beauty, especially when it turned into a borderline slideshow. Fortunately, the Switch is capable of rending this game without stuttering whatsoever. Hyrule Warriors: Definitive Edition runs like an absolute dream, featuring crisp load times, plenty of vibrant visuals, and the added bonus of seeing no major drop when partaking in co-op. Similar to Fire Emblem Warriors, some concessions are made to help keep this consistent, but you’ll be busy kicking too many asses and taking too many names to notice. Hyrule Warriors: Definitive Edition is a stellar example of how to deliver a remastered experience, mostly.

Unfortunately, there is a pretty nasty issue with how some of the game seems to render text in this case. The text size is a major problem in portable mode, being borderline unreadable. Even graduates of Zoolander’s Center for Kids who Can’t Read Good would be hard pressed to decipher what the game is telling you during battle, and with how chaotic the screen can get, there were more times that I had to take myself out of the action to determine my next objective than I’d like to admit. Hopefully, Koei Tecmo is able to patch this quickly because I know I won’t be the only one who has a problem with it. The mini-map also suffers the same fate, devolving into a smear of colors that you can barely make sense of. With how important these are in completing objectives it’s frustrating to have a difficult mission blow up in your face because you can’t see what has to be done in the heat of battle.

It’s safe to say that for those who haven’t experienced this title in its previous forms, Hyrule Warriors: Definitive Edition is a no-brainer. It features the biggest roster, the most content, and plays well at home or on the go, despite some technical issues. Those who may have only played one of the 3DS or Wii U versions would also be making a very safe bet in this case, but ultimately, this is just a solid choice for any party that is interested in seeing Link and friends (and foes) kick all kinds of ass across what is essentially a love-letter to fans of the series. Popular locations, iconic songs and a truckload of things to see and do make this one title that is going to keep you going well until the next Zelda game comes out, and then some. 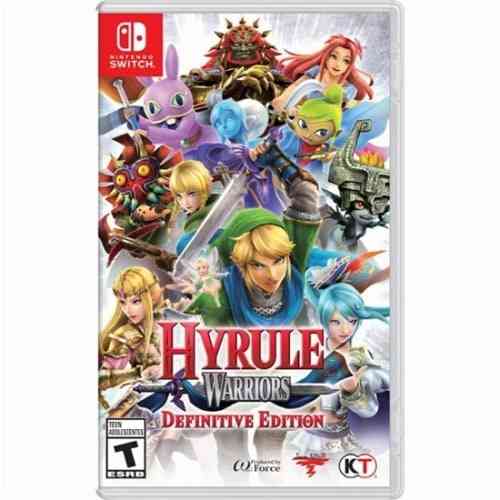