The Oddworld games capture a part of the 90s that mostly passed me by. Side-scrolling puzzle platformers feel like gaming history from an alternate universe to me. This could be why Soulstorm evokes such an unusual sense of nostalgia. I’ve not travelled to this country before, but it all feels very familiar. For better or for worse, Oddworld: Soulstorm perfectly recreates that lost era of 90s PC gaming.

Soulstorm is the second in a planned five-part series following Abe’s epic saga. As someone new to the series, I was sharply jostled by the tone of the story. Every character looks goofy as hell, but theirs is a tale of class warfare, workers’ rights, and the horrors of colonialism. Were the games always like this? Am I crazy in feeling like bug-eyed aliens with high pitched nasal drawls are a weird pick for a story about revolution and mass sacrifice to the altar of capitalism? In case that wasn’t already clear, the story of Oddworld: Soulstorm is a fascinating one. Although I can’t decide whether this is pure writing quality or the ephemeral whiplash ginned up by putting these players on this stage.

Not The Story I Was Expecting

You might be caught flat-footed by the story, but the gameplay is pure, uncut 90s PC platformer. A series of increasing challenges are braided neatly with an ever-expanding toolkit that includes chanting, crafting, and land mines. You’re constantly on your toes, balancing new powers with sharp upticks in enemy density and variety. None of the mechanics are platforming game changers, but they’re implemented with precision and grace. Be warned, however: if this is your first foray into games like Oddworld, there’s a tiny learning curve to overcome. 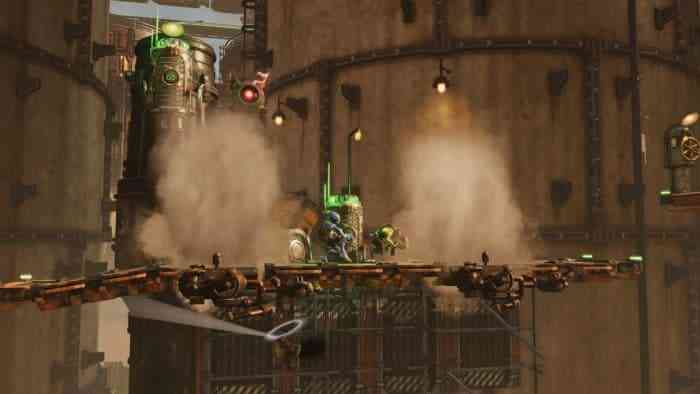 For me at least, finding that 90s puzzle platformer mindset took quite a while. There’s a very specific set of reflexes, a certain group of mental muscles I had forgotten even existed. Getting into the rhythm of Soulstorm was a lot bumpier than I had anticipated, in other words. But once you find that rhythm, you’ll be launching explosives and dodging sniper fire with breathless ease. For those unfamiliar with the kind of platforming games I’m referring to, I probably sound crazy. What’s so hard about navigating a 2D space? Guys like Abe don’t move as fast as Sonic. They aren’t built for acrobatics like Mario, they aren’t skilled fighters like Samus, or Simon, or Link. The limitations of the character’s abilities are an important element of the overall experience. Which can be pretty frustrating! But it was never a complete dealbreaker.

Not Quite 2D After All

I’ve been continuously calling this a 2D game, but that’s not exactly true. It’s described as 2.9D, which is far more accurate. Abe is locked to a narrow road in a much larger world. This gives you the feeling of a complete environment while giving the gameplay that two-dimensional feel the series is known for. In fact, the visuals were a much sharper and more sophisticated experience than I was anticipating. In particular, the character models achieve a sort of nostalgic illusion. Abe and company somehow look exactly like you remember them in your head, which is preposterous. Not even the 3D renders in the box art or the cutscenes were this crisp. Beyond the graphics, the sound design is also fairly slick. If you’re playing Soulstorm on PS5, the DualSense controller plays a small but notable role. When chanting or giving orders to your fellow Mudokons, the sound of it comes straight from your controller. It’s a small touch that fleshes out the game environment and makes it all feel just a little bit weirder.

Abe’s weird little world is a bit darker than I was expecting, but it works, after a fashion. The curious juxtaposition of the art design and the narrative makes a strange, yet compelling, impression on the player. The gameplay can trip you up if you’re not used to that stiffer 90s PC platforming style, but you eventually find those muscles. I ran into a few nasty roadblocks, but I never got impossibly stuck. More than the mechanical hurdles, my biggest hurdles were conceptual. Returning to this world, this flavor of frustration and satisfaction, won’t be for everybody. If you’re looking for a portal into an oft-forgotten slice of gaming history, Oddworld: Soulstorm will open that for you. This is an elevated, modernized window into puzzle platformers of the recent past. A little patience and a little perseverance will introduce you to a strange new world. 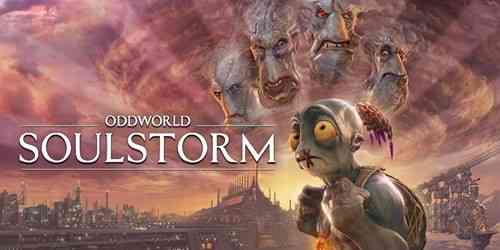 
Oddworld: Soulstorm Gameplay – Putting Out One Fire at a Time in the First Stage

Here’s What’s Coming to PlayStation Plus Next Month