Mr. Driller Drill Land is a pick-up-and-play montage of fun puzzle games. I’m talking about the type of fun that Tetris ignited back in the old days when Nintendo’s heyday incorporated beauty in simplicity when game developers scratched their heads over how to reinvent 2-dimensional fun. However, can it bring something special in a day where 2D is a genre and no longer a trend?

Remember when stories were charming and straightforward? There was a time where video game plots were the cherry on top of every gameplay loop. Despite being something of a relic, Mr. Driller Drill Land demonstrates an impressive attention to the world and characters. It represents a time where narrative was much more challenging to communicate in video game format, so the writers filled the downtime with every megabyte of rising action and character development they could afford. That is why, Instead of skipping through dialogue to reach the next puzzle, I ended up enjoying the sequences in-between.

As far as I’m concerned, the only thing that came before the Mr. Driller saga is Tetris. The gameplay is very reminiscent of our oldest routine, stacking blocks and making them disappear; only this is more hands-on. Almost everything you need to know about the meat is in the title. The bread and butter are swathes of blocks just waiting for a drill; the drill is the butter knife, and we can take everything about the experience and lather it into one mission: going down. At all times, nothing is more important than getting to the bottom, but Bandai Namco decided to make a show of it.

Five different towers, or “attractions,” fill the layout of Drill Land. While the mission is essentially the same at every level, every attraction entails a new set of rules. The game leans hard into the unique themes behind each arena. We have outer space, ancient temples, castles, haunted mansions, and international vacations. That’s right; there’s an attraction where you visit various countries on the way down. But it’s still a puzzle every time. The game measures the player’s longevity in health, air supply, or lives. And the deeper you go, the more unstable the arrangement gets. So, if the player isn’t careful where they dig, the blocks can come down in a surprise cascade. Sometimes, death comes when you least expect it, no matter how much thought you put into the next move. Sometimes, there’s no time for thought. The pace increases as soon as the timer slams down. That is why I’ll say the gameplay is sufficiently challenging, especially if you go for Classic Mode, where the rules are less forgiving. 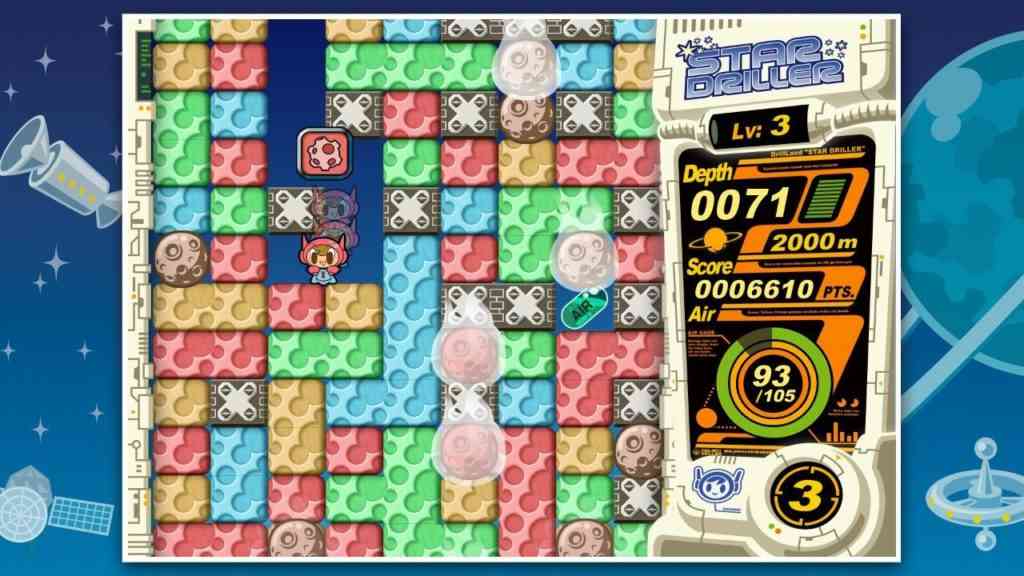 Even outside the grind, the overworld motivates nonstop play. Key to the story and missions, we have a group of bombastic characters that reel you into the campy moments. Their names are Susumu, Ataru, Anna, Taizo, Horinger, and the dog Puchi. Fun fact, Taizo is the main driller dude from the classic video game title everyone should know, Dig Dug. Together, these characters represent the video game heroes of a different decade. They hearken back to the beloved style of Japanese action television, where young action heroes take center stage, kicking names and taking ass with extra words of motivation to get you through the day. It doesn’t hurt that they can be cute at times.

Return of the Grind

The retro 2D art style is back and better than ever, yet it still appears as if it would fit into an old console. Since its inception, the Mr. Driller series has utilized a simple stack-and-crack style of gameplay that has transitioned from staple to niche in the industry. There’s nothing necessarily wrong with that, but it’s difficult to pinpoint the intended audience for Drill Land. To me, the audience may include anyone from nineties kids to today’s kids. And the art style just squeezes everything it can from the 2D aesthetic, infusing it with the Japanese stamp of animation. It’s a bit of anime, and chibi rolled into one. For those of you who don’t know what I’m talking about, think original Mega Man, very colorful and pleasing to behold. It is hard to describe more without taking you on tour. Each attraction coincides with a unique game mode – Some are better than others, but people will have their preferences. 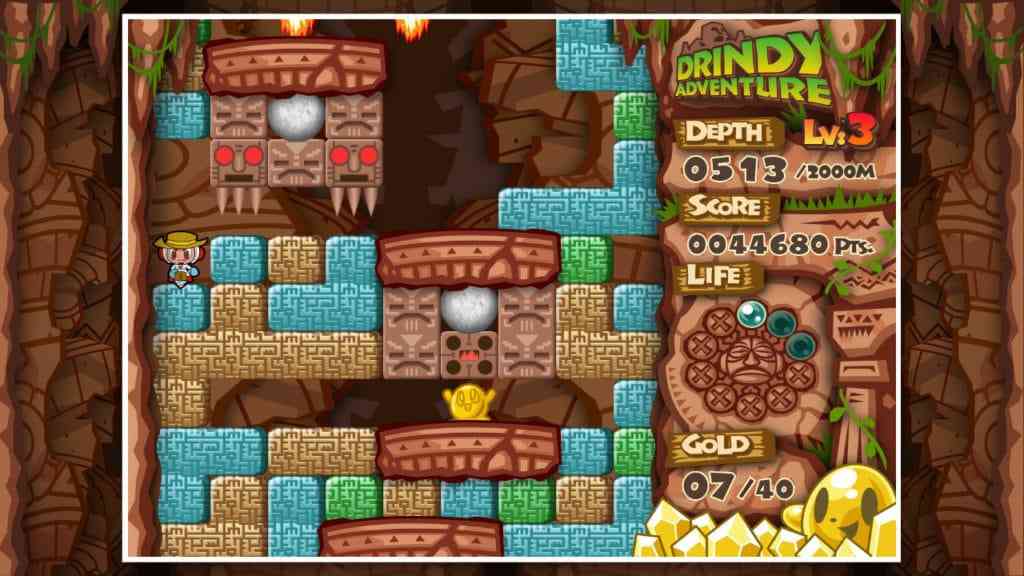 What’s most important is replayability, the desire to go back and wreak havoc with a drill. The space mission is a race against time, the haunted mansion brings the scare with ghosts, and the castle has knights and dragons. But the infinite replay value may not be the biggest magnet. As soon as you boot up Mr. Driller Drill Land, the first thing that hits is the music. It has Japanese sensibilities all over it. It sets the mood, gets you ready for the game. You feel like you’re in a theme park, absorbed by the urge to try out every ride, and I have never said that about any video game. This soundtrack beautifully complements the overworld map and level design. The sound design stands out as much as any other aspect of gameplay, if not more. So compelling, I’d be surprised if anyone didn’t listen to the score and feel like a kid again.

What are We Digging Toward?

Drill Land’s few but varied problems, most of them, stem from the fact that it’s a 2002 game in 2021. It gets repetitive and dull within an hour of playtime, which is a caveat to its design and age. Pick it up, play, set it down and wait for the itch to come back. In the long term, one may call it a game that has outlived interest… or not. Being nearly two decades old, it has survived the attention span of one generation, but it may be ready for the next. The endless dig suffices for short bursts of fun, but it’s also more compelling when played competitively. Unfortunately, at the time of this review, online matchmaking is rather desolate. Because it’s so different from today’s console titles and part of a retro genre that’s more akin to modern mobile games, the time might be ripe for re-release. 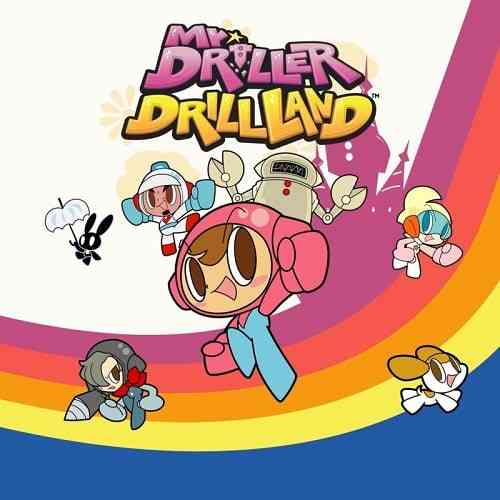