Kingdom Two Crowns is a side-scrolling strategy game where you can build a new kingdom from the ground up, recruit people from outlying camps to join you, and protect your land and citizens from harm by arming individuals to fight against the evil Greed monsters. There is minimal instruction, and most actions are figured out through trial and error, allowing players to immerse themselves in the experience as much as possible. As a real-time strategy where you can be attacked at any moment, Kingdom Two Crowns is an exciting game despite how simple and minimalistic it looks on the surface. It is easy to spend many hours playing one campaign, and finding new solutions makes it more interesting for the next time you attempt another life.

Norse Lands is an expansion to the already addicting game where six new islands are available, with inspiration taken from Norse mythology and lore. If anything, Norse Lands feels like an improved version of the original with a fresh new take on a familiar experience. Whether it is your first time or your tenth time playing, there is still something to learn, and knowing what the icons mean will take some time. Everyone has and will go through the same confusion initially, as the game purposely avoids telling you everything. This allows players to feel for the game and predict what they need to do next, but investing in the wrong thing also brings tragic ends to an otherwise successful campaign.

While the gameplay is similar to most other Kingdom games, Norse Lands also increased the replayability factor by introducing citizen houses that spawn new people and shields that can be wielded when defending and fighting against Greed. The strategies required and the creative new puzzles added to the game’s charm, ultimately introducing something that feels more balanced than the original.

Kingdom Two Crowns: Norse Lands isn’t just about building a city from random coins and jewels but also discovering new ruins and finding creative ways to get around the land. You are a ruler who recruits random people from their campsites, offering them a coin for their services. Starting with two shops that forge axes and bows, citizens can help build your town and defend it. Some villagers will help you chop down trees to help you claim more land, and others will join your army to prevent the evil Greed from entering and taking your coins. As much as possible, you want to protect yourself and your crown, as losing this indicates your reign is over, and your heir will have to pick up from where you left off. 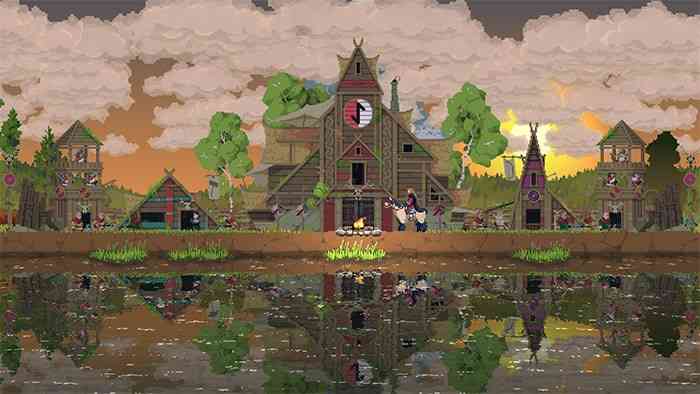 Exploration is another massive part of the game, and with your trusty steed, you can uncover new ruins and recruit more locals to expand your reign. As you explore further, there are places where other modes of transportation can be found, and new items and different powers can be unlocked with each discovery. Your other goal is to find new islands by rebuilding a broken-down ship with your citizens, which allows you to sail away to different places. This is also a great way to find items to help your previous islands, as not all islands are equipped with the same materials.

Not as Simple as It Looks

Despite the lack of instruction leading to a high amount of trial and error on everyone’s part, it is effortless to learn if you pay enough attention to your surroundings. Norse Lands can be enjoyed either on your own or with another friend. Because of how the scenes are laid out, there is room for a split-screen without compromising the visual experience. Having that said, it is not always obvious what is required – not because the glyphs are obscure, but because the icons are pretty small and can look transparent. Having reviewed this on the Playstation, I found myself standing really close to my television screen just so I could see what was going on (and my screen is not small). This isn’t a dealbreaker, though, and is a good reason for a mid-game stretch, but keep in mind that you could miss something if you aren’t looking carefully enough. 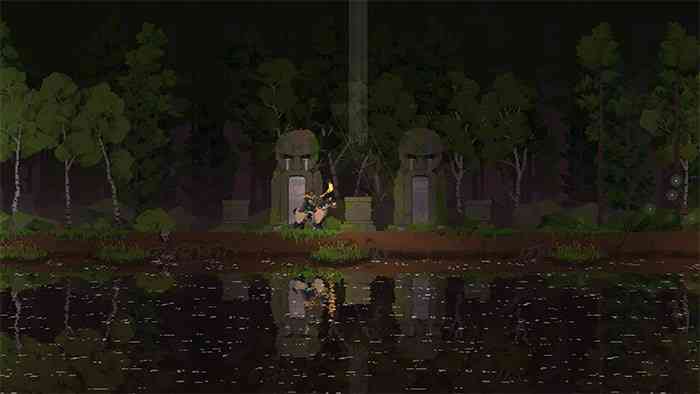 What elevated the experience further, however, was the surreal soundtrack that accompanied the gameplay. All I can say is wow – it was majestic, frightening, and serene at the same time. Depending on the color scheme and mood of the current scene, the music can jump from whimsical to “oh crap; we might be in danger here.” It was awe-inspiring, and very rarely do I feel moved from just music alone. Add that to this strategy game which I already adore, and you’ve got me hooked.

Though much of the gameplay of Norse Lands was similar to the base game, the challenges and strategies felt more balanced and less unforgiving. You do not have to be an experienced gamer to know what to do, and chances are fans of the Kingdom games are probably figuring it out too. Needless to say, if you think you may enjoy a strategy game with minimalistic visuals and a phenomenal soundtrack, give Kingdom Two Crowns a try, and for an enhanced experience, Norse Lands is a no-brainer DLC to add to your collection.