Back in April, I had the chance to preview a new Meta Quest 2 game from Terrible Posture Games. And I liked what I saw. It had fun gun play, and some cool features that had me curious to see the final product. Now it’s June, and MOTHERGUNSHIP: FORGE is ready for release. And it’s shaping up to be one of the better first-person shooter offerings in VR.

If you like Doom, you’ll feel right at home in MOTHERGUNSHIP: FORGE. You’re placed in a series of dungeons, and given lots of guns. You’ve got to survive continuous levels of bullet-hell mayhem. Shooting at you from many directions are all manner of turrets, robots, and drones. It reminded me of one of Terrible Posture’s older and lesser-known titles, Tower of Guns.

When I said you’re given guns, I meant more that you’re given gun parts. You have a basic shooter, a randomly-chosen gun that might spray lots of fast, scattered shots or a shotgun with fewer, stronger shots. But on each gun are upgrade slots, into which you can attach upgrades, like ammo packs or power boosters — or maybe even another gun. Along the way, MOTHERGUNSHIP: FORGE awards you more parts and upgrades for surviving levels. You can craft yourself into your very own killing machine (literally) as you add more attachments.

So far, you’re probably not that impressed. It’s pretty standard stuff in many ways. But the move to 3D changes everything. Playing MOTHERGUNSHIP: FORGE on Meta Quest 2, you’re swiveling, ducking and contorting your body to avoid the slow-moving bullets flying at you. It’s a rush when you’re in the thick of the game’s tougher levels, and survival relies on your own wits (and agility). You’ve got to constantly prioritize threats on the fly: do I take out that far-away turret, or focus on the stapler-like robot running towards me? 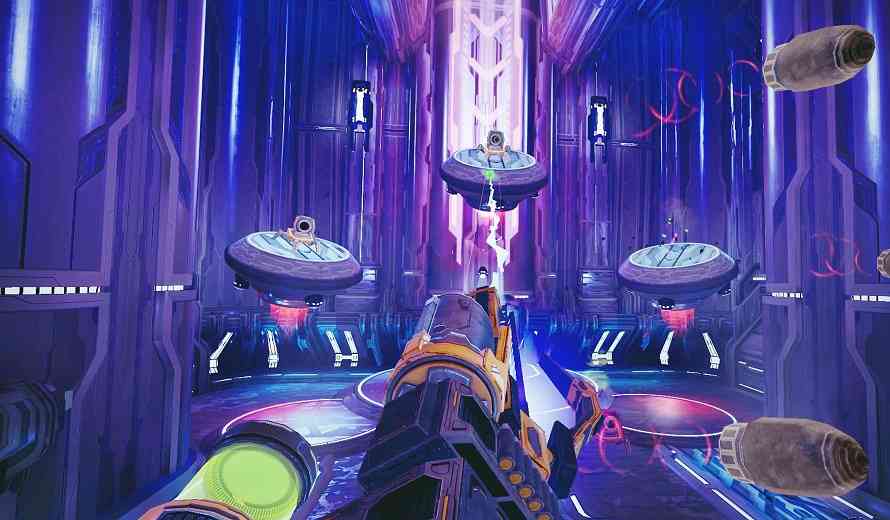 MOTHERGUNSHIP: FORGE gives you a lot of choice to personalize your nightmare, too. After finishing a level, you choose from a few doors where to go next. One door might offer a reward of money (to purchase upgrades in the shop), and another door might award you a new gun part. You decide what you want to focus on. Then, after surviving a bunch of levels, you face a big bad boss.

Boss fights are tough. Overall, MOTHERGUNSHIP: FORGE is a hard game. Even on Easy mode. There are times when you are facing so many bullets, coming from so many angles, that it just feels like you just can’t avoid them all. I tried my best though, and a word of advice: definitely play this game in a big, clear open space. With all the flailing, bending and arm-waving you’ll do when things get hectic, this is one of those VR titles that could cause an injury or a broken lamp if you’re not careful.

So it’s not an easy game. But what I liked was the control I had over things. Yes, bullets were hard to avoid, but they were avoidable. It was a matter of how agile I was, and how much effort I put into surviving. Unlike some 2D buttet-hells, MOTHERGUNSHIP: FORGE will not foist unfair, behind-the-back ambushes upon you. There’s no cheap deaths from enemies you can’t see. So it is difficult but fair. I died a lot, but I didn’t feel as frustrated as I usually would in this type of game. 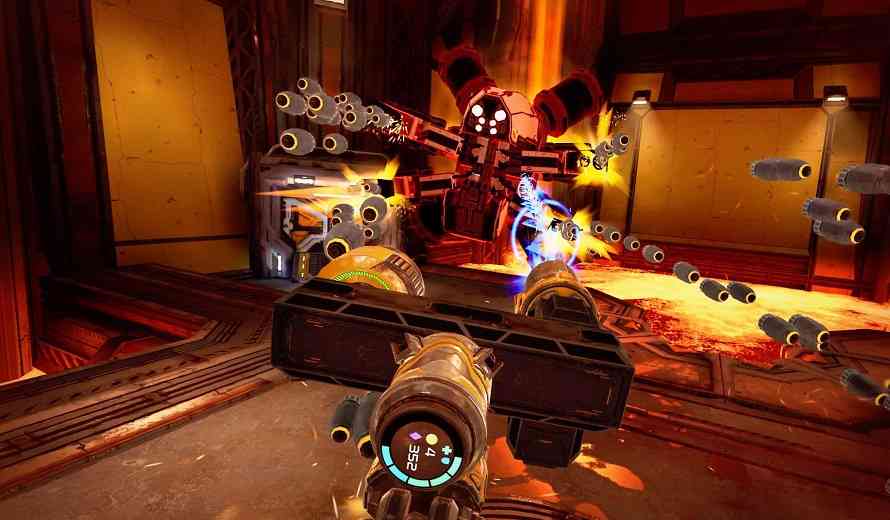 Visually, MOTHERGUNSHIP: FORGE is not the most stunning game. The models are blocky — think old-school Doom more than the most recent iterations. Again, it recalled for me Tower of Guns, and that game is 7 years old. But there’s a fun, cartoony vibe to the visuals that appealed to me. I would like to see more color in the levels, though. There’s a dull, monochromatic look to most of them. I get that this limited palette is intentional, to help disguise enemy turrets and cannons and make them harder to see. But the lack of variety grates, and that is amplified when your eyes are already strained from the VR experience.

Levels could use more variety too. MOTHERGUNSHIP: FORGE does throw twists at you, don’t get me wrong. But generally levels are all a big, dark-red room, and it would be nice to see more surprises visually. Overall, I liked that MOTHERGUNSHIP: FORGE offers a unique WAY to play with each run-through, with choice of upgrades and attachments. But I wished for more uniqueness in the types of environments I was placed in.

MOTHERGUNSHIP: FORGE is a lot of fun. One of the best VR bullet-hell games I’ve experienced, it will have you ducking, bending and swiveling like a demon. It may lack variety and is best played in small doses (and big clear rooms), but If you like bullet-hell survival, and you’ve got a Meta Quest 2, this one is a title to check out.