One of the rarest narratives in video games are the ones that disempower the player. Games are a form of escapism, power fantasies, it’s a world where we can feel like we are in control. In Mosaic, you play as a nobody, an insignificant employee of a gigantic corporation. No strengths, no disabilities, nothing stands out about you. Not rich, not poor, living paycheque to paycheque, existing with the goal of paying next month’s rent. Developed by the Norwegian indie studio Krillbite, Mosaic is best described as a walking simulator (can we please come up with a new name for this genre?). Throughout the game, you’ll either be solving puzzles, or exploring, or doing both at the same time. Although the puzzles aren’t particularly challenging, this is definitely a case where gameplay exists to reinforce the story, rather than the other way around.

One of the core puzzles represents the protagonist’s daily work where the player must build a grid to effectively deliver resources towards a milestone. This game strikes a great balance of tedium and fun. While in the moment, it felt like I was making important decisions, but at the end of it all, I always realized that anyone could’ve done it, and it was just a matter of time before I simply reached the milestone. Then, never overstaying their welcome, the puzzle ends before any real tedium set in.

This abstraction is an amazing metaphor for what working for a mega-corporation can be like. Being just a small cog in a gigantic machine, it can be impossible to see the meaning behind your work or its effect in the grand scheme of things. As you grind your replaceable life upon the same task every day, the only thing your employer cares about is your efficiency in making them money. My ah-ha moment happened when work started to get harder. Your character’s passions start lowering your efficiency by redirecting your resources. While you can easily suppress those feelings, I went out of my way to build my grid around and away from those passions, putting in extra work for no reward and less efficiency. I wanted to keep the passions of my depressed character alive, even if it was an abstract symbol of it. 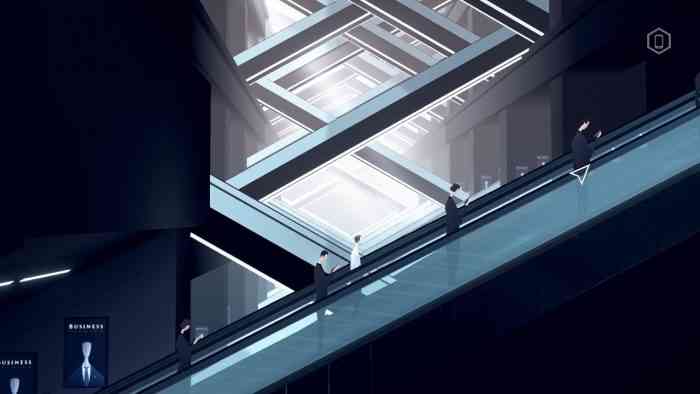 The side games on your character’s phones are equally as entertaining as they are depressing. The biggest one is a simple clicker game, where I found myself sinking so much more time into it than it deserved. In a way, it perfectly exemplified why some of us play video games. Sometimes we feel stuck in life, or even when our lives are heading somewhere, the grind is so long and each step can take months or years of work. The clicker provides that instant gratification, our actions having a direct and immediate impact as it rapidly grows our achievements.

Unfortunately, there were a few puzzles that missed the mark for me. Many of these moments simply arose from frustrating controls that took me out of the moment from an otherwise very immersive experience. Other times, I wasn’t sure what the game wanted me to do. Although it never too long for me to figure out, and I understand they want to stay away from hand-holding in an already minimalist game, but simply leaving the player with no direction or demonstration doesn’t always facilitate smooth gameplay.

To back up the social message and interesting puzzles, Mosaic boasts many impressive set-pieces that are incredibly striking. With standouts like walking over a gigantic bridge above hundreds of cars stuck in traffic or a butterfly floating through a construction site, many scenes are carefully crafted with visual metaphors and cinematic camera work. I honestly haven’t enjoyed taking screenshots this much in a long time.The sound design is also quite impressive and the music, which is strategically scarce, will delight you when it finds its way into your life. 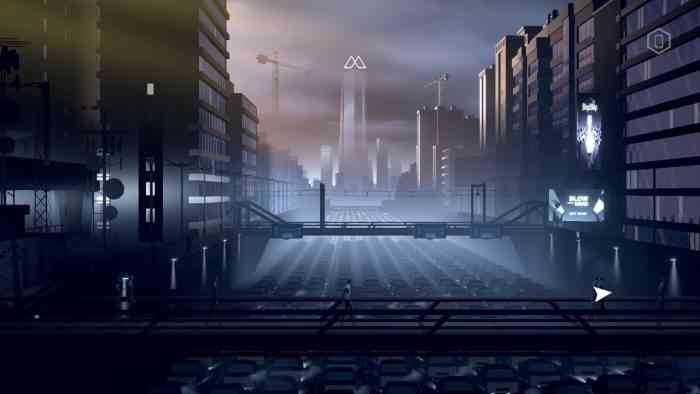 Although Mosaic’s gameplay is simple and the play length short, it boasts a powerful story with many unique elements you won’t find anywhere else. This Kafkaesque game pulls no punches in its depiction of depression, loneliness, and existential crisis of the modern-day. The mere existence of Mosaic is poetic. In a world where profit seems to be everything, pursuing art and meaning can feel impossible. Creating a game that disempowers the player, in itself, is going against the grains of financially successful norms. Through this game, not only is Krillbite telling us to pursue meaningfulness, they’re leading by example. I happily recommend Mosaic to anyone in search of poetic storytelling experience that’s only possible through video games.