Minoria Review – The Genre That Keeps on Giving

Holy moly do I love a good Metroidvania. Something about gaining new powers to explore new areas warms the cockles of my heart. When the time comes to pick up game reviews, I’m always excited to find one on the pile of unreviewed games. It’s just so rare to find a real lemon amongst the bunch. So, knowing that Minoria is a Metroidvania, I guess the question for this review has got to be less “Is it good?” and more “Does it stand out from the rest?”. There are a lot of good Metroidvanias out there, after all, and Minoria happens to be one of the better ones.

Momodora is a series of Metroidvania games, which rose to greater fame with its fourth game Momodora: Reverie Under the Moonlight. The game strikes a very good balance of precise combat and explorative platforming and doesn’t lean too heavily on either. Minoria was released on Steam in 2019 as the fifth game in the series, and acts as more of a spiritual successor to the Momodora series than an actual sequel to Reverie Under the Moonlight. It absolutely stands on its own and requires no prior knowledge of other games to enjoy. It takes place in the same world and focuses on a battle between nuns and witches.

The player begins the game as Sister Semilla, a warrior nun, who is one of few survivors of a witch attack. She is caught in a blizzard on her way to the castle and misses the majority of combat. Early on she makes contact with her princess, and they work towards “purifying” the witches who have assaulted them. While the story begins pretty bare bones, it goes in some interesting directions to motivate the player forwards, and gets quite rich before the adventure is over. 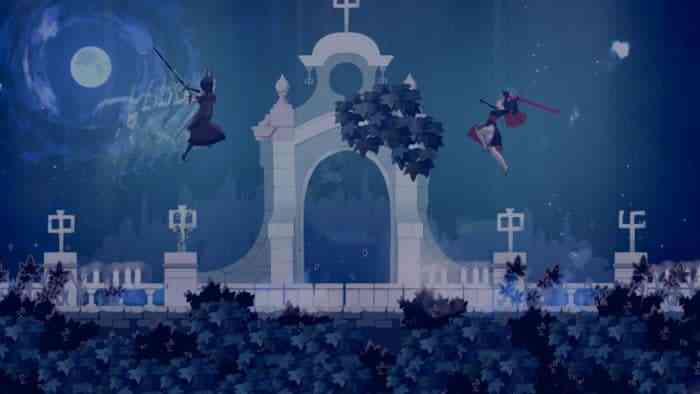 The graphics are gorgeous. They have a strange way of matching the pixelated visual style of prior games, while not being pixelated at all. They have a beautiful hand-painted aesthetic that reminds me of a much less stylized/more chibi Vanillaware game. The environments support the story well by having corpses of the battle Semilla has just missed, strewn about.

The game’s music is fittingly somber, and I often found myself stopping for moments to listen while exploring. The desolate environments combine with the somber tunes to create a very tragic, post-war tone that suits the game perfectly. The action-y boss music is less memorable but helps to heighten the mood when necessary.

The controls are simple and well-laid out. Square is melee attack, x is jump, circle is parry, and triangle is the assigned item use button. Controls were very natural feeling and responsive. Parrying results in a strange counterattack, and I found myself wanting to use this function more than the normal attack because it felt so precise and accurate to do so. Holding a direction while pressing circle allows for a dodge roll. Holding down L1 brings up the game’s map and pressing R1 allows Semilla to converse with her sidekick. Talking to Sister Fran was a combination of flavor text and tutorial-like hints about what to do next and was a very welcome addition to gameplay.

Minoria has a steep difficulty that begins right with the first boss. And it doesn’t always have quality of life options modern players are used to, like save points right before bosses. Sometimes enemies that seem no stronger than the average will deal ludicrous amounts of damage to the player, making some deaths feel cheap. There’s definitely trial and error to be expected in new found areas.

The map of the castle is very well done. I really appreciate when a Metroidvania begins with a bit of linearity before going into full blown exploration mode. The environments connect naturally, and make it feel like there’s lots to do while not overwhelming the player with options. There are also plenty of secrets and abilities laid out everywhere, which kept me meticulously combing the land.

The more I played Minoria, the more I liked it. This became a game I was rooting for, and that’s a great feeling. It sets a high mark for the Momodora series and stands tall about the slew of other Metroidvania options out there. If you’re a fan of Metroidvanias, platformers, or 2D combat, Minoria comes highly recommended. And if you’re a fan of the Momodora series, Minoria is the series best. Highly recommended!