Fight Crab is a wacky 3D action battle game with a ridiculous concept that makes you wonder what the source of inspiration was for the creators, and why you haven’t had this stroke of genius before. I mean, who doesn’t want to play as a multi-legged shelled warrior on a lifelong quest to become the greatest fighter there ever was? Honest and simple, there is no plot to this madness and it doesn’t need one – Fight Crab is about destroying your crustacean opponents, upgrading your skills, buying kickass weapons, and making sure you become number one. While the idea is undoubtedly thrilling, the novelty of the game doesn’t stick around for too long – but that doesn’t necessarily make the experience a negative one.

You are a crab with the ambitious goal of becoming the lord of the crustaceans – that’s all there is to it, and it’s a beautiful story. The game starts with you as a crab, snapping its claws in the face of opponents and banging on their shells to injure them. To win a fight, you have to continuously hit other crabs and flip them over onto their backs for three seconds. Once you are declared the winner, you will receive reward money and advance to the next level. With this money, you can upgrade your stats, buy new weapons, and even change the type of crab you want to fight as.

Old-school arena brawls are rather charming, plus you’re playing as a crab so what’s not to like? The maps in the game all have their own unique spin, and sometimes you can interact with your surroundings and use objects lying around to your advantage. As you scramble around the arena slapping random lobsters in the face, take a look and see what props you could use as impromptu weapons. From rocks to cars to dinnerware, you could use these items as melee weapons, throw them around the place, or just run straight into them. It’s chaotic. 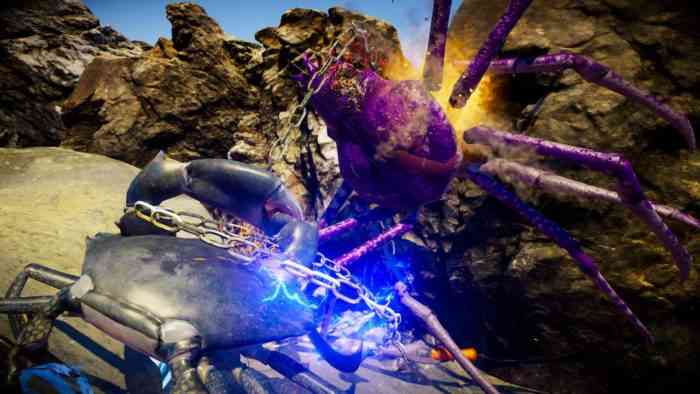 Although the game has such a wild and attractive concept, a part of me was also looking for more. The novelty wore off quicker than I would have wanted as the battles started becoming repetitive. This game is good for those looking to kill some time, but I wasn’t able to sit through more than half an hour before I had to switch my mind to something else. It’s definitely not boring but I have terrible patience for repetition.

Come One, Come All

Now, the controls were fairly straightforward but it also felt slow and unresponsive. The only way I could describe it is like using a computer mouse, and the cursor lags behind a second later than you would prefer. Not a dealbreaker, but it was frustrating as I was trying to turn around to face my opponent, and my crab decided to take its time to slowly make its a rotation. To be fair though, the opponent was just as slow and ungraceful, so it wasn’t like the enemy was rushing to kill me. It was just exasperating because I didn’t feel like I had a grip on my crab’s movements, and in a brawler I would like my fighter to actually do what I want it to do, and fast.

As a fighting game, Fight Crab thinks you should battle your family and friends too. Even though the controls can be finicky and feel overwhelming to new players, the madness is enough to make anyone feel like a newbie. That can be a good thing, because that could put you on equal footing with someone who has never played before. This is when button mashing becomes your friend. There’s no gore or anything inappropriate so it’s suitable for children too, which could make for an interesting family game (unless violence is a no-no, then forget I said anything.) There are some kinks in the selection screen that could be ironed out – for instance, other players are unable to select anything if someone else is looking up crab and weapon stats – but this is easy to work around. 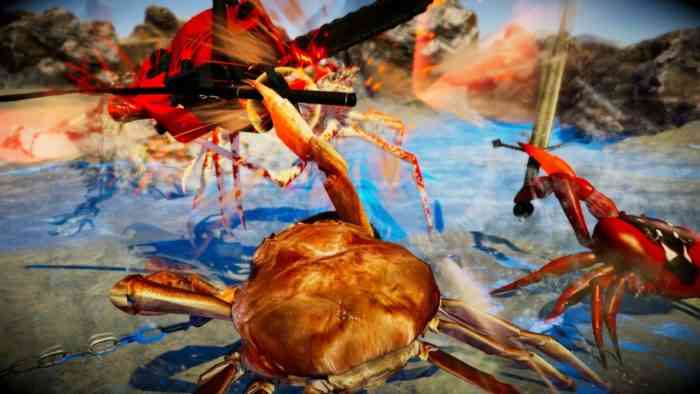 While the idea of Fight Crab was novel and hilarious, it, unfortunately, fell a tad short because of its average execution. There were a lot of redeeming qualities to the game though, so it was still time well spent. Brawlers can be repetitive by nature, but it was a slow grind to get to where you wanted to be and this made it hard to play for a long time. Even though the controls were slow, I’ll admit it was fun to button mash and I am sure this would be a hit in a household with children and those who want to experience the novelty of this game.