Try to describe the general premise of any farming sim to somebody who’s never played one, and there’s a good chance you’ll be met with blank stares or unamused nods. It’s difficult to explain what makes a simple game primarily based on doing chores fun, and it is perhaps a secret only those who have fallen in love with the genre are in on. If there’s a soft spot in your heart for (virtually) tending gardens and milking cows, Doraemon: Story of Seasons will be an amicable addition to your library. Though it doesn’t add enough new content to the established formula to rival say, Stardew Valley, it greatly improves upon previous Story of Seasons games, making it one of the best titles the series has ever offered.

Doraemon: Story of Seasons is a crossover between the popular Japanese manga and anime series starring Doraemon, a robot cat with gadgets from the future, and Story of Seasons: the decades-old legacy of farming games formerly known as Harvest Moon. The tie-in story features Noby and friends, who are transported to a different dimension after planting a special seed for a school project. They find themselves trapped in the beautiful town of Natura, with all of Doraemon’s gadgets lost and scattered. As they try to figure out how to get back home, they post up and follow the mayor’s child labor policy at his demand. Sue, Sneech, Doraemon and Big G snatch up the last available jobs in town, leaving Noby to tend our trusty farm.

The story is well-realized, though the delivery is inarguably slow. The opening chapter and tutorial takes almost an hour to get through before you actually get free rein, and most subsequent dialogue is also lengthy. Despite this, there’s more guidance and purpose provided in the experience than most previous Story of Seasons games, making it quite engaging and a bit more meaningful.

Each day, Noby can tend crops, raise animals such as chickens, cows and sheep, and wander around the many regions of Natura. Almost anything you pick up can be shipped for money at the end of each day, and there are a nice handful of townsfolk to befriend. At the start, you are given a handful of farming tools for raising crops, a pickaxe for mining, and a fishing rod. A bug net is available for purchase, which allows Noby to catch bugs that can be sold in addition to virtually any other item you can carry. 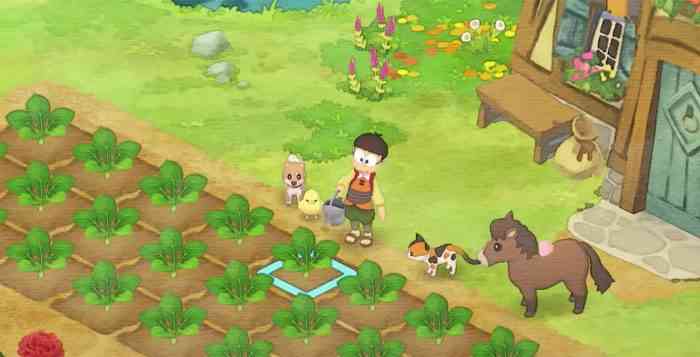 Noby will often stumble upon quests and cutscenes throughout each season, adding longer-term objectives to work towards. Each day, he is given a stamina bar that wears down with every action performed. In previous games, this could often be a huge buzzkill that greatly limited the amount you could achieve in one day and effectively dragged out gameplay. In Doraemon, there is a napping system that allows you to plop down at almost any point and fast-forward time to regain stamina. I love this mechanic, and found it to be especially handy when I set my mind to a task that I just wanted to finish all in one go.

Music for the Eyes and Ears

Doraemon: Story of Seasons is one of the most visually striking games the franchise has ever seen. Its soft animation, painted art style and beautiful use of color gives a lot to appreciate when exploring the map. The buildings are full of gorgeous details and lively clutter both inside and out, and the hub of East Natura feels like the most vibrant city this series has ever had. Rural regions feel more detailed and filled out than ever before, and especially large kudos should be paid to the beauty of the water. Fishing in video games has never been a favorite activity of mine, but the tranquility and deep blue hues of Doraemon’s lakes and seas makes the idle task a pleasant one.

Even more beautiful than the visuals is the music. The soundtrack is absolutely incredible, with a vast range of songs that ebb and flow with the progression of conversations and events. The music will change to match the tone of the dialogue or to accompany a certain character’s presence, and songs feature everything from classical guitar to big, orchestral scores. The diversity of the compositions and the excellent performance strongly persuades me to consider it one of the best video game soundtracks I’ve heard in a while. 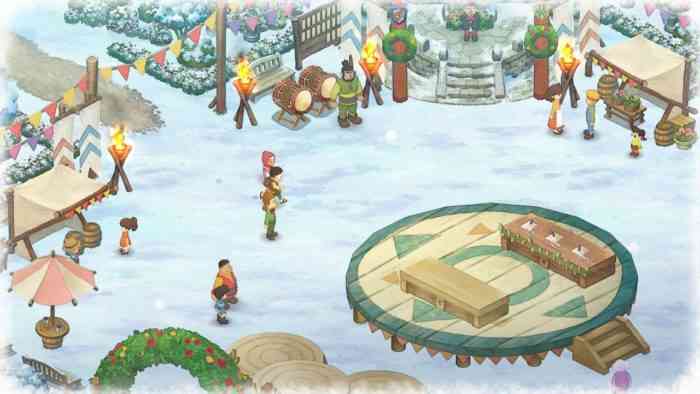 The world of Natura has a good handful of regions to explore, with almost two types of every environment. Noby runs at a noticeably slow pace, making traversal around the town’s mountains, forests, beaches and city centers arduous and a bit frustrating. Fret not, because eventually you can obtain a fast travel gadget and a horse to speed things up, but at first the map will feel rather large — a welcome alternative, at least, to the oft-tiny maps in Story of Seasons games.

Doraemon’s performance is great on PS4. The controls feel smooth, loading screens are relatively fast, and I experienced no glitches, crashes or framerate drops. The only complaints that could be made relate to gameplay design choices that may not suit everyone.

For one, the game is tedious. Tedium is basically a given for games of this genre that rely on grindey tasks and slow-burn mechanics like waiting days for trees to grow back so you can chop them again for wood, or spending a lot of time both in-game and in real life gathering resources to upgrade tools or buildings. These are games about doing work, for Pete’s sake. The grind drives the game forward and gives purpose to theoretically mundane tasks that would otherwise get old. It’s not for everyone, and only you can discern whether or not you enjoy this type of gameplay. 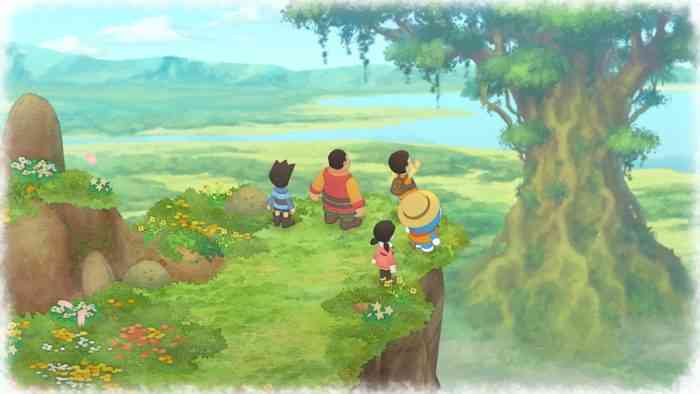 Doraemon also doesn’t reshape the Story of Seasons formula as much as you’d hope if you’ve grown accustomed to all that’s offered in Stardew Valley, but it does add a great number of elements that make it more fun and sophisticated than previous entries. The gadgets you uncover over time mix up the core gameplay, with items that will speed up the growth cycle of your crops or allow you to pass through blocked passages. Additionally, there is a much larger selection of home furnishings, decor and buildings than almost ever before.

A Farmer’s Life For Me

Doraemon: Story of Seasons is beautifully executed, and it’s one of the most engaging Story of Seasons games I’ve ever played. The story is great and progresses without overly excessive downtime in between major events, and there’s no shortage of things to do to keep you entertained. Though the core gameplay may be tedious for some, it’s completely engrossing for others who love games of this nature or have loved Story of Seasons games in the past. As for me, I hope that Noby and his goofy friends stay trapped in Natura for a while — I won’t be ready to leave life on the farm anytime soon.

Gran Turismo 7 Is Back Online
Next Kingdoms of Amalur: Re-Reckoning Review – An Absolute Must for RPG Fans
Previous Fight Crab Review – Enter the Crustacean Colosseum