Kingdoms of Amalur: Re-Reckoning Review – An Absolute Must for RPG Fans

Once again the fated hero must rise, sword in hand and unbelievable strength of heart. The lands need a savior and you are the one who can bring the world to peace against the rising evil. Sure, it sounds a little overdone – the kind of thing we’ve all seen before – and you wouldn’t be wrong in this case; Kingdoms of Amalur: Re-Reckoning is a remaster of the RPG cult-classic with arguably one of the most notorious development histories in the industry. It has been eight years since Kingdoms of Amalur first launched, but how well does it hold up today?

Offering one of the most unique introductions to a game, Kingdoms of Amalur begins with your death (and subsequent mystical resurrection) carted away as a corpse and dropped into a pile of the dead, awakening in a mass of decayed flesh to fight your way out. The opening stage is a wonderful tutorial to introduce the mechanics of the game and it only gets better from there. Despite its age the gameplay for Kingdoms of Amalur holds up remarkably well. Melee attacks are swift and easy to combo, swapping between your two weapons of choice is fluid, and having a dedicated shield button rather than losing a “hand” to carry it is great. Even the spells you unlock are intuitive and easy to use. Although the game is without a lock on function in combat, its easy and exciting to navigate the field, perfectly time a parry, and blast a distant opponent with a bolt of lightning. This game makes you feel powerful and it does an amazing job at it. Let us not also forget the Reckoning Mode. After charging your Reckoning meter, players can cause the game to enter a slow-mo mode while you decimate your opponents. Activating a special kill command on a target will increase your XP multiplier for the fight as well as instantly kill everyone you downed while in Reckoning mode. It looks amazing and feels fantastic when you get swarmed by enemies. 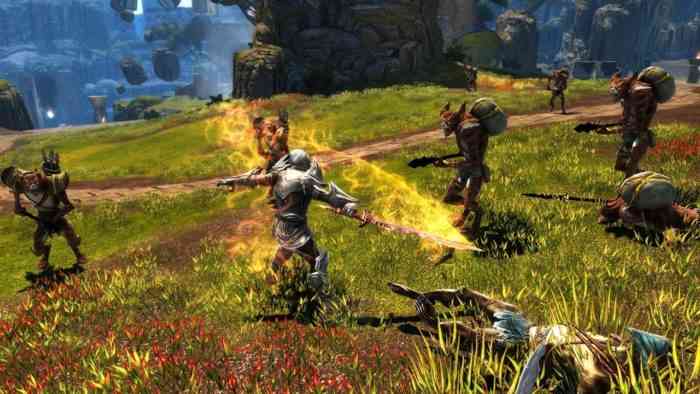 Once you step foot into the world and bring up your map for the first time you see just how vast the game truly is, although given the constraints of games eight years ago, you will find areas that are a little more barren than you might be used to. The updated graphics and fresh paint job of Kingdoms of Amalur looks nice, but players should remember this is a remaster, not a remake. The colors, lighting, and animations have had a little touching up and the game has been retooled to function better on current gen, but this is still going to handle and look like an eight year old game. Speech animations aren’t going to line up with dialogue (no matter how well acted the voicework is) and some of the animations you are bound to see for countless hours such as running still look fairly stiff. These aren’t game breaking in any way and in fact lend itself to the games charm as a cult classic; it’s a reminder of what RPG games used to be and that they can still hold up even today. The only downside I encountered was the rather poor camera controls when running.

A Second Chance for This Infamous Cult-Classic

Holding in the X button will send you sprinting – with unlimited stamina – in the direction of your choice, however this makes you unable to adjust the camera with the right stick at the same time. Turning the character with the left stick will work, however the camera jumps a rather jarring 30ish degrees in that direction rather than allowing for a smooth and controlled transition. Again, this isn’t game breaking, but I found myself more willing to walk and control the camera rather than sprint blindingly forward. Being an RPG you’ll also find there are soon more quests than you know what to do with. Despite their constant appearance popping up on the map, these quests are well written and feel like real, engaging events a fantasy hero would encounter. It doesn’t hurt they were written by Forgotten Realms author R.A. Salvatore and comic book legend Todd McFarlane. The quests can be a little campy at times, but the writing combined with the genuine acting still makes for a fun experience each time. 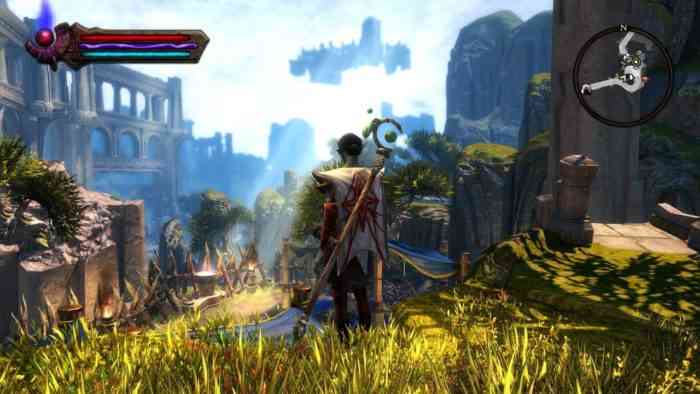 As an RPG, Kingdoms of Amalur borrows some of the best conventions of gaming while still presenting it at an accessible pace, making for a greatly enjoyable experience. From having to concern yourself with inventory management (thankfully not by weight), repairing your gear from wear and tear, and having one of the most interesting skill systems in recent memory, this game really does stand out for the best of reasons. Not only unlocking epic skills and attacks through the three schools of combat (Might, Finesse, Magic) but having equippable combo classes based on your stats as well as unlocking new fate perks based on your actions? Kingdoms of Amalur: Re-Reckoning is every RPG lovers dream and if you don’t mind its somewhat dated appearance, this classic absolutely deserves your undivided attention. I’ve been having a blast saving the people of Amalur and I can’t wait to see what the all-new DLC content will bring to the table. 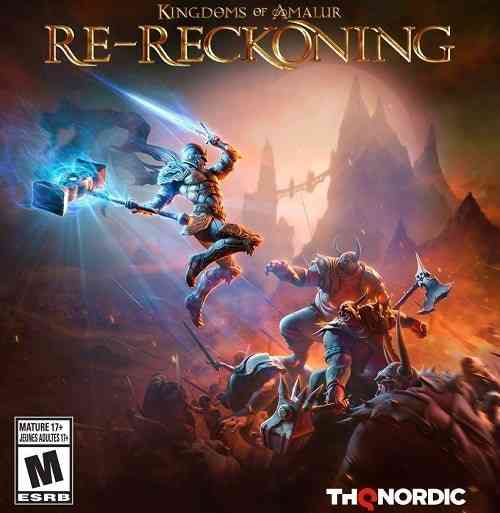