Minecraft: Story Mode Season 2 Episode 2, “Giant Consequences,” does nothing to earn that name. In what may be the most inconsequential piece of storytelling I’ve ever taken part in, Story Mode has already hit a major low of this season, as well as the one before it.

A piecemeal narrative of Story Mode’s length is entirely dependent on relationships that the player can invest in, both on the side of our heroes, as well as our villains. Episode 1 of Minecraft Story Mode’s second season did its best to introduce a new cast of characters that would help move Jesse forward, but the second episode makes no strides to reinforce these emotional connections. Even worse, it removes some of the stronger new characters from the equation or diminishes their role for the sake of returning cast.

What’s worse is that like so many Telltale games before it, these decisions that you make are focused around your team. It’s up to you to decide who goes where or who gets left behind. If we’re no longer feeling the need to protect these characters, then what’s our motivation behind these silly choices?

“Episode 2 doesn’t even try to hide the fact that … choices mean nothing.”

I call them silly because Episode 2’s choices are just that — a series of A’s and B’s that, at the end of the day, have no impact whatsoever. I’m not even that concerned with this problem anymore. Starting a few years ago, Telltale’s games haven’t been about the choices you make, but they’ve at least given the facade that the player’s choices matter. Episode 2 doesn’t even try to hide the fact that these choices mean nothing.

The choices are all ingrained into a narrative that is shockingly without impact. I mean it — Episode 2’s narrative may very well be the weakest narrative Telltale has ever produced. Characters are recycled, plot lines are followed like breadcrumbs, locations feel empty, and worst of all, there are zero consequences in all of Episode 2. Zero. 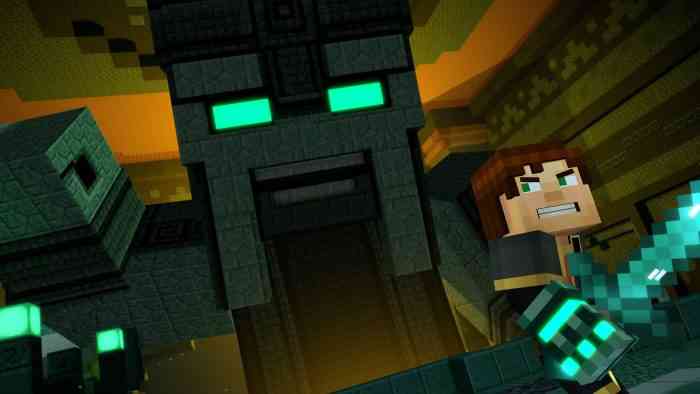 For those of you who played the first episode of Minecraft: Story Mode Season 2, or read my review, you’ll remember the story wrapped up nicely before a cliffhanger was tacked on so we could transition into the next arc of the story. Looking back, it almost feels like a joke how well episode one was cared for, only to be followed up with this. The cliffhanger? It’s resolved in the same amount of time it took to show up at the end of Episode 1 — no time at all.

Instead of defeating a major villain for the story arc, the previous one immediately respawns in a new form — this time as an abominable snowman instead of a deep-sea titan. There’s literally one interaction that happens in between the player defeating the villain and him returning in his new form with a new quest that needs undertaking. This has set the precedent that nothing from previous episodes will matter because any victory is temporary and the scenarios have no substance.

What does work is the audio. The ambiance and music that flowed so well through Episode 1 is still alive and well, and it’s really enjoyable. Sometimes, though, the sound will disappear completely from an interaction or event, leaving nothing but silence. It’s awkward, to say the least.

“Episode 2 is a huge letdown compared to the solid beginnings of Episode 1.”

It should be noted that the main dungeon of this episode is quite the sight. It’s grandiose and intimidating, especially when you’re at the bottom looking up. With our goal waiting at the top, it was exciting to think about the climb ahead. But then you’re just there. There’s no climb to the top. There’s a puzzle room, then a quick time event, a conversation, then credits roll. It felt like a complete waste of visuals. The ending dungeon may have well been the size of my apartment.

There are some nice things to be said about the twist that they throw in at the end because I didn’t see it coming, but that doesn’t mean it’s good storytelling. The major reveal that the villain has been with you the whole time doesn’t astound, because I barely knew the character he had been disguised as. So when the big reveal came, I was surprised, but also uncaring.

Ultimately, this was two hours in which nothing was accomplished. I feel no closer to the new members of the team and I don’t see any reason why this journey was worth telling. It was recycled, mundane, and lacking in every way. Episode 2 is a huge letdown compared to the solid beginnings of Episode 1. There’s still time to right the ship, and I’m really hoping they manage to do just that.