Who’s ready for yet another exclusive game for their Nintendo Switch? Introducing Mechstermination Force, a brand new game from Hörberg Productions – the same developer who also developed the indie gem Gunman Clive. Seemingly inspired by the likes of Contra and other side-scroller shooters from days past, Mechstermination Force brings a slick visual look, addictive yet challenging gameplay, a ton of charm and a unique twist.

Mechstermination Force takes place in the distant future when a group of MegaMechs invade and start destroying cities all over the globe. A group of independent soldiers band together to take on these epic-sized mechs in a bid to save the world from annihilation. Fortunately, your group includes a clever shopkeep who is always ready to sell you more firepower – and health! He’s not completely in it for the money, and along the journey, he’ll hook you up with a pair of awesome abilities to make your boss hunting excursions a little easier. 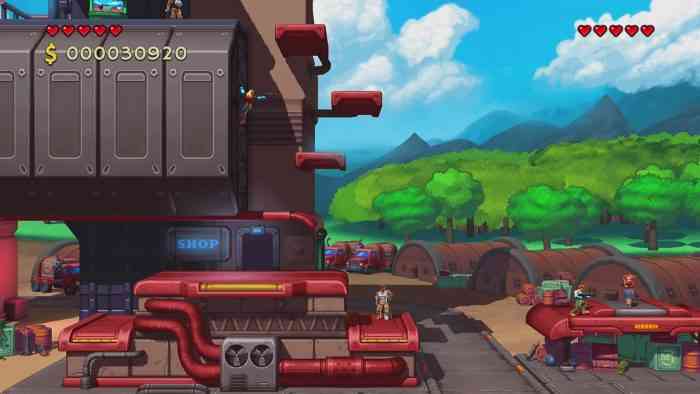 Mechstermination Force is a side-scroller style game, however, unlike most games in the genre, the action is limited strictly to boss fights. There are no levels to work your way through or minion mechs to destroy, you’ll just take on boss after boss – and they aren’t that easy either. The bosses, or MegaMechs, are generally quite massive, usually taking up most of the screen. You’ll have to figure out where their weak spots are and eventually you’ll expose core – or cores – which you’ll then destroy. Each boss presents its own set of moves and challenges – so you’ll constantly be adapting your strategy. If you’re anything like me, most boss fights will take multiple attempts before defeating them – but there’s an addictive charm to the game that kept me coming back for more.

The game features local co-op play for up to two players. You’ll both select from one of four characters and then you’re off blasting bosses one after another. The multiplayer works perfectly. In the game, you’ll earn cash in a communal pool of funds that you can spend to increase the amount of health you have or upgrade to new weapons. If you get stuck on a boss, you can replay previous bosses by visiting the arcade machine in the games hub level which will allow you to earn some more cash. While the bosses are generally quite well designed, be warned that there will be some overly frustrating moments. For example, some of the enemies firepower seemingly defies logic and flows through seemingly solid surfaces, chipping away your precious health. Platforming can be a bit of a pain at times – timing jumps and avoiding bullets while the massive boss is in constant motion. 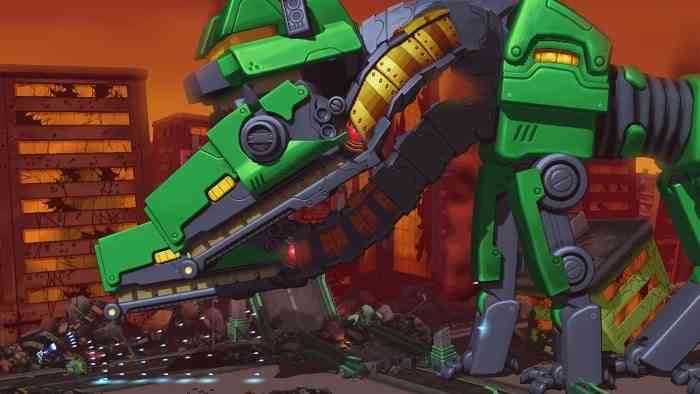 The game has a bright, fun visual look to it. The MegaMechs are massive and each feature a distinct look and personality. You’ll find MegaMechs inspired by birds, snakes, and even a snail. The playable characters are all nicely animated and each weapon has a distinct “bullet” look so you know what you, and your partner, are shooting. I really got a kick out of the backgrounds too, usually taking place in various locales from around the world. The games hub-world was fun to explore, but I almost wish they jammed a bit more into it. The soundtrack is pretty good, though replaying the same boss fight over and over will sometimes make the music feel a bit grating.

Mechstermination Force is a pretty fun game, but it’s definitely not easy – so if you’re easily deterred from frustrating challenges, be warned. With that said, earning money isn’t too difficult – so buying new weapons and more health isn’t too much of a chore, and usually, that’s all it takes to overcome a challenging boss. Local multiplayer was a blast – I had a ton of fun playing this with my 8-year-old son. In fact, I don’t even recall playing much single player at all – it’s so much better working with a partner. There aren’t a lot of extras to this game, aside from replaying boss fights to beat them quicker – or the seemingly impossible “without taking damage” challenge. I found some of the MegaMech abilities felt a bit cheap – bullets shouldn’t be able to travel through hard surfaces. There are over a dozen boss fights in Mechstermination Force, and we logged in over 5 hours playtime, which is a pretty decent value. If you’re looking for a challenge and a solid co-op game, then I can easily recommend Mechstermination Force. 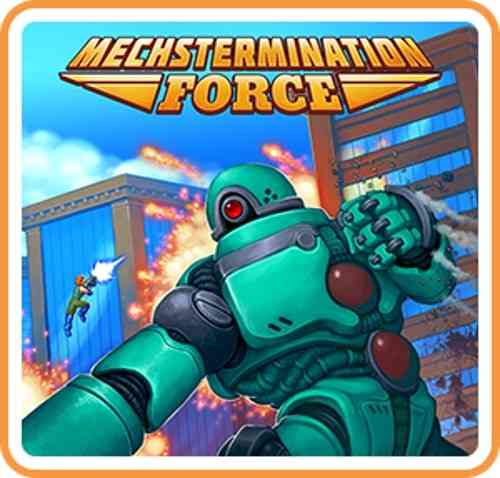 
The Artful Escape Review – Scuse Me While I Kiss the Sky