When Final Fantasy VII was released 22 years ago, I was a small child and needless to say I did not understand its impact and influence in the gaming world. However, the game had always been around in my life, from playing with older friends on the PS One as a scrawny little kid, to watching Last Order and Advent Children as a teenager, and finally to buying myself the PSP release of Crisis Core in the late 2000s. It was the game that changed my life, and also the game that made me realize you can fall in love with video game characters (Zack Fair, I’m looking at you).

With it being arguably one of the best and most epic JRPGs around, the release of Final Fantasy VII for the Nintendo Switch is a big deal. A huge deal; not just for me, but for most of the gaming community. Personally, it was a way for me to have one of my most favorite games on the go, and frankly, it makes all the difference during long wait times. But for the most part, it is about a game franchise making its way back to where it first started. Having Final Fantasy VII on the Nintendo Switch is like the game and company discovering each other again, and what a great reunion it is for a classic to return home.

Just to give a brief and unhelpful summary to remind players of what the game is about, you are playing as Cloud Strife, a powerful young mercenary who is trying to bring down his old corporation, Shinra Electric Power Company. He is introduced to a terrorist group named AVALANCHE, a team of individuals with different motives but the same goal. Together they break into buildings, blow stuff up, and run away from authority…but it is so much more than destroying government property. As the story unfolds, you learn more about the characters, the world they live in, and Cloud’s mysterious past. There are many, many layers to this well-written story, and the characters all play a part in making this game an epic one. 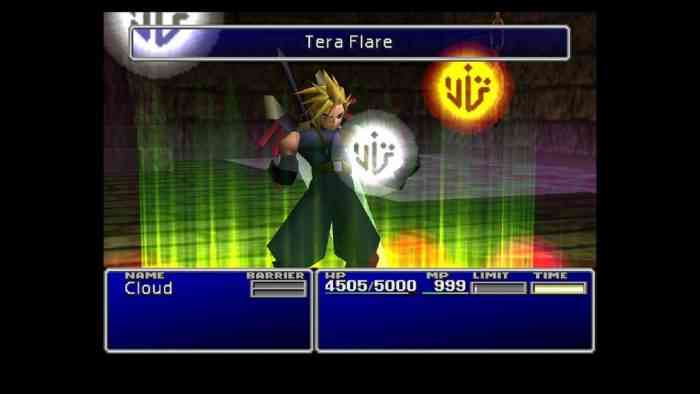 The game utilizes an Active Time Battle (ATB) system, where you can command the actions of three protagonists per battle. There are two gauges in battle – one is the ATB gauge and the other is the Limit Break gauge. The ATB gauge fills up over time, and until the bar is full you cannot make another command. The Limit Break gauge is a special power gauge that fills up depending on the damage the character takes. Once it reaches its maximum, the character is able to perform their ultimate ability – a highly advantageous turn if done well. There is also “materia”, a concept Final Fantasy VII is known for, which involves colorful orbs that contain different powers (such as magic, lures, and summons) and can be equipped to individual characters.

Final Fantasy VII also has a very useful menu, where you can utilize items, equip weapons, and even heal each other with magic outside of battle. Once you are in the World Map, you have the option to save the game whenever you like, although it is worth noting that saving the game does not automatically restore any HP or MP. You are able to pitch a (very expensive) tent to help restore your health, or you can opt to go to a city and sleep in an inn for a cheaper price. Of course, there is the risk of random encounters on your way there, but the monsters around the cities you’ve been in are relatively easy to defeat.

As this is not a remake, everything about this game is pretty much the same as the old one we used to play as kids. The graphics are killer (that is, for 1997), the music is just as nostalgic, and the ability to rename your characters will always remain a part of the old RPG charm. Also, as it was formatted to fit the television screens of our youth, there isn’t a way to change the game from 4:3 to widescreen. Honestly though, it isn’t all that bad because you can still see everything on your screen, and the game itself is engaging enough to overlook this minor detail.

But what does playing the game feel like on the Nintendo Switch? For one thing, the portability is amazing and I am thankful that I have a Nintendo Switch for this reason. Unfortunately, there are moments in the game where it does not feel optimized for the console, although it does not affect the game too much. The tutorials have been tailored to the Switch buttons, such as using directional keys and pressing “B” to run. However, if you use the joystick, you will automatically be running anyways without having to hold “B”. There are other minor things like map views where you can press “L” and “R” to change angles, but this can easily be done with the right analog stick. A lot of the things they teach you during the game are just substitutes from an older console that did not have both buttons and analog sticks in one controller. Unfortunately, the joysticks are a double-edged sword – while it allows Cloud to run without having to hold an additional button, it also scrolls through items extremely quickly and can cause errors especially during battle. While frustrating, you can train yourself to master the analog sticks after hours of grinding or choose to find the perfect balance between using the directional buttons and the joysticks.

My overall experience with Final Fantasy VII on the Nintendo Switch has been a very positive one. The ability to dock and play on the big screen or to bring it around with you on long journeys is a huge advantage that makes me glad it was released on this console. The game is very engaging with well-developed characters, and it has a captivating storyline with a certain charm that still holds up 22 years later. While my friends were laughing at me for playing an old game on such a new console, they also understood the reason why my obsession with this game continues into adulthood. Final Fantasy VII was such an accomplishment and really, it will always remain an enjoyable classic for us all. And for those who have not yet experienced its glory, now is a great time to try out the game that influenced the world of RPG.