Now approaching 60 years of fighting evil, Marvel’s Avengers show no sign of nearing retirement. They, along with a number of other beloved Marvel superheroes, just keep jumping back into the fray. People love them. The Marvel Cinematic Universe is a gazillion-dollar-a-year franchise. Images of Marvel’s gang are everywhere you can plaster a picture or cross market the brand. The Marvel superheroes are staples of gaming, too. They’ve appeared in best-in-class games like PS4’s Spider Man and many other, less stellar titles. With Midnight Suns, Firaxis has merged Marvel super-heroics with X-COM’s special brand of tactical combat. Is it a winning formula or failed recipe?

You Are the Hunter…

Marvel’s Midnight Suns is a tactical, turn-based RPG. While there are some superficial resemblances to Firaxis’ earlier X-COM, the differences are significant. Instead of fighting aliens, your team is up against a powerful, supernatural army of demons and soldiers. While you could craft and customize your soldiers X-COM, they were essentially generic grunts. Midnight Suns gives you the ultimate power fantasy of building a unique superhero and fighting alongside some of your favorite Avengers, X-Men and other greats from the Marvel stable.

However, the biggest difference is in the combat mechanics. Midnight Suns uses a card-based battle system that’s beautifully easy to understand, consistently evolving and deep enough to carry you through the game. The way you grow and develop your heroes’ cards should be a model for card-based combat moving forward. More on that in a bit. For now, suffice to say it’s a winning idea.

While the narrative takes some twists and turns, the premise is classic Marvel. In part, the story and characters come from the comic book series Midnight Sons from several decades ago.  I(n any case, Hydra’s Dr. Faustus has awakened the immortal demon Lilith from a centuries-long slumber. In a tutorial sequence of several missions, Dr. Strange, Iron Man, Captain Marvel and Scarlet Witch face off against the newly arisen Lilith, and temporarily repel her when Dr. Strange places a magic barrier around the iconic Sanctum. Realizing they are no match for Lilith and her minions, Strange and company resurrect The Hunter — that’s you — from her Crypt. In typical Marvel fashion, there is a twist. The Hunter is Lilith’s child. Your mentor is her sister. They have all done battle before. You know, families are complicated.

What Makes a Hero?

Of course, your version of The Hunter can be male or female, and there is a relatively detailed character creator that allows you to pick from pre-made parts. Ultimately, making your Hunter look unique comes from both the closet full of collectable outfits she earns and upgrading her armor at the Anvil. What’s amazing is that, with all the Marvel games out there, this is the first time players can roll their own superhero.

The Anvil is a crafting station in the Forge, one of the many rooms in The Abbey, your home base. The Abbey is an ancient church, located in a parallel dimension near Salem, Massachusetts. The Abbey starts with some basics, like your bedroom, the Forge, the War Table — where you get your missions — and Training Grounds. As you move through the game’s story and missions, you expand the capability of the Abbey and grounds. 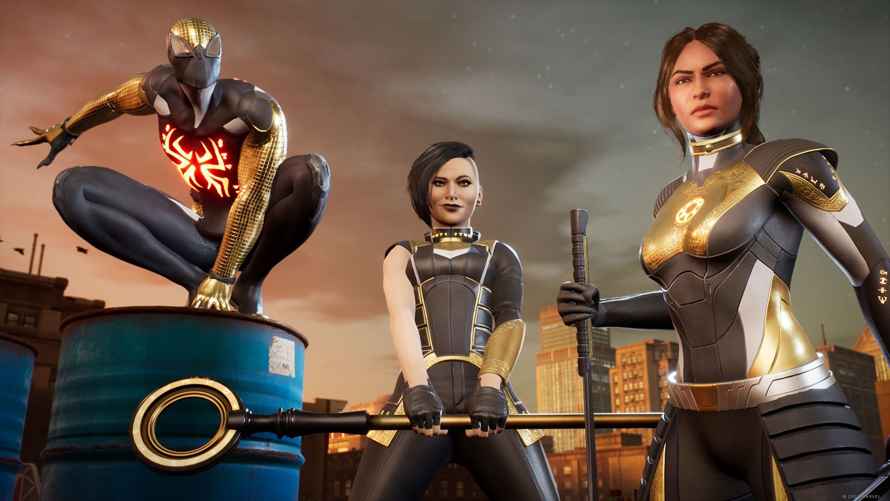 The Abbey is also where The Hunter forges relationships between herself and the other Midnight Suns, Avengers and X-Men. By hanging out with them, chatting, watching movies and other mundane activities, your relationships with the other heroes grows, allowing them to join your potential team for missions. A surprising amount of Marvel’s Midnight Suns is focused on the roleplaying and narrative elements of the game. There are hours of cutscenes and a reported 65,000 lines of dialogue. Story and characters are front and center in a way that was absent from X-COM.

All that loving attention to narrative leads naturally into combat, where the Hunter and her team face off against the demonic forces of Lilith and Hydra. You pick a team of superheroes from an eventual roster of 13. Each hero has specific strengths and abilities, represented by a selection of cards. Your task is to forge a powerful squad and assemble the best possible deck.

Cards basically come in three types. There are attack cards, skill cards and a third type called Heroic Abilities. The attack cards are bread-and-butter offensive moves and they can be upgraded to do more damage or powerful combos like chain attacks against groups. The skill cards are essentially buffs, like Blade’s vampiric ability to add a bleed effect to all weapons and turns. The Heroic Abilities are impressive, game-changing special attacks that never fail but also need to be charged up during battle. Unlike X-COM, your squad won’t be hiding behind cover, but elements of the environment can be used to destructive advantage. Like all tactical card games, learning it takes time, practice and skill. In Midnight Suns, even failure is entertaining. 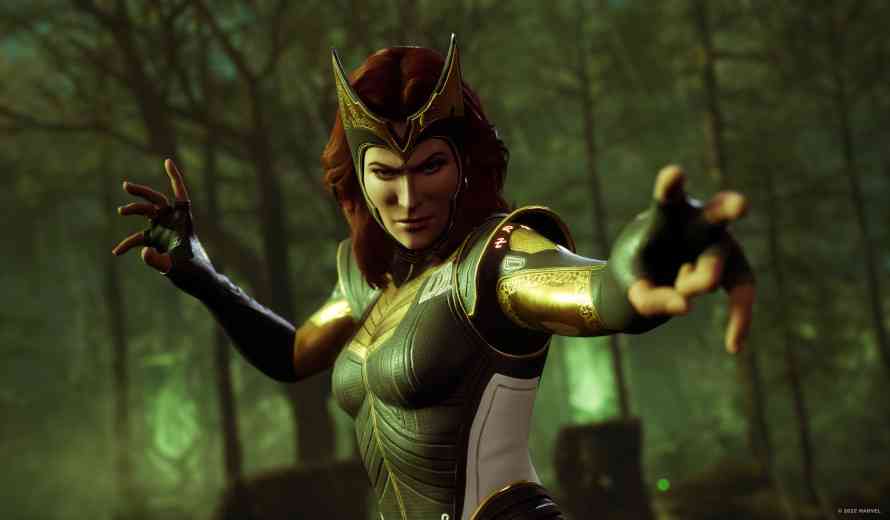 From early in the game, enemy encounters most often consist of your chosen team squaring off against a powerful mini-boss or boss, aided by waves of Hydra soldiers. There are variations in both objectives and Lilith’s forces, and the card-based tactical gameplay is never anything but engaging. There are some battles that feel unnecessarily protracted, with one or two waves of reinforcements too many. At the end of each battle, you receive a rating and rewards based on your performance. Every time a hero gets K.O.’d your rating drops.

When it comes to Marvel action games, the quality of writing and voice acting have a pretty high bar to hurdle, thanks to games like Spider-Man and Guardians of the Galaxy. Although it isn’t the absolute best of the best, Midnight Suns has a strong narrative arc, well defined characters and a cast of talented, experienced actors, including Nolan North. The patented, snarky Marvel humor is there and like most Marvel games, Midnight Suns both exploits and plays against our familiarity with the heroes. Not everyone will agree with every vocal interpretation, of course, but I found them effective. 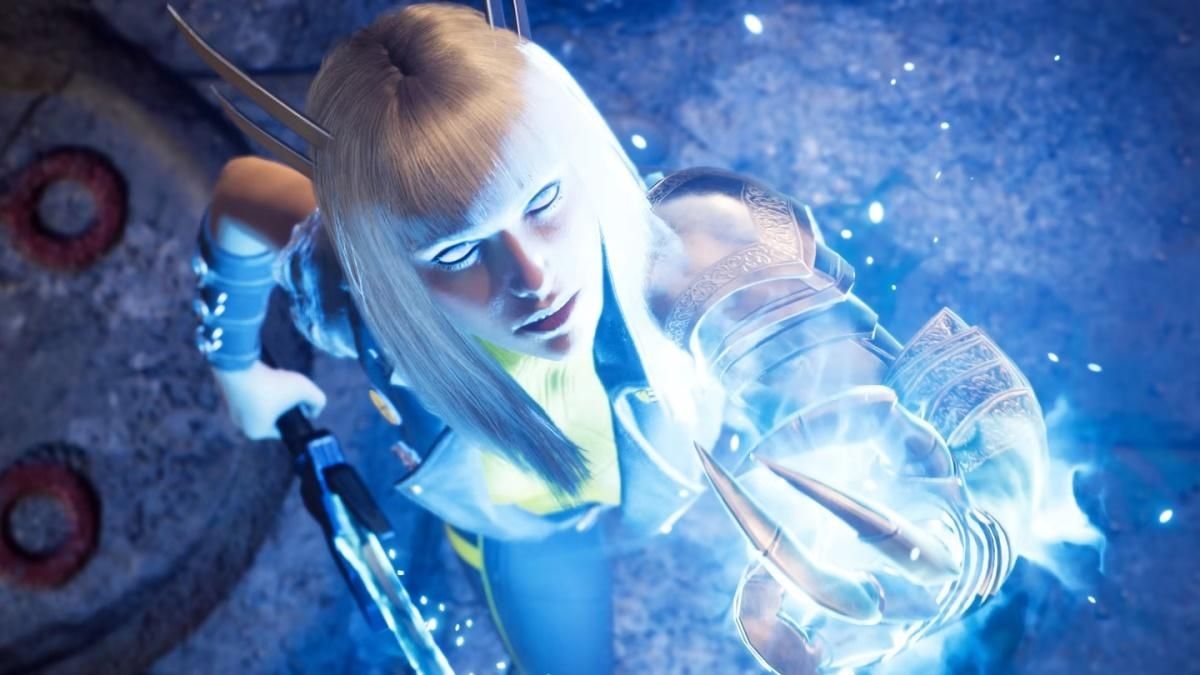 While the story picks up steam, the first few hours are weighted heavily towards exposition, cut scenes and character development at some expense of action and engagement. There is a lot of dialogue and, over time, some of it feels in need of a ruthless editor. I think it comes from the writers’ impulse to tell a fully-fleshed out story. Midnight Suns’ script doesn’t always snap and crackle, but none of it is remotely bad or poorly performed.

Marvel’s Midnight Suns has solid art direction, but graphically feels slightly behind the curve, probably due to it having to live on every console new and old. Fight animations and battle effects are effectively staged but — and this is true of every turn-based game — they’re are also repetitive and some take a very long time to play out. Aside from that, the spells and weapon attacks are heavy-metal visceral, colorful and sound great, as does the music by composer Tim Wynn. The score is dramatic and boisterous, just like a big-budget action film. 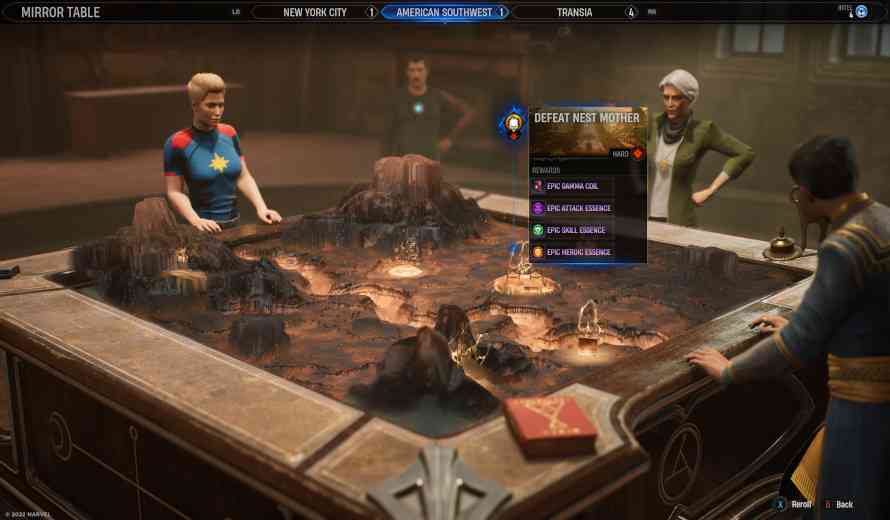 The Way of the Hunter

The ability to partner familiar Marvel superstars with a hero of your own creation is just part of Midnight Sun’s appeal. The card battle system perfectly balances easy-to-learn with tough-to-master. With a heavy emphasis on narrative and character, Marvel’s Midnight Suns is much more than an X-COM clone. The Marvel gang feels right at home in the tactical RPG genre thanks to the game’s smart mechanics. Fighting alongside iconic Marvel heroes never gets old. 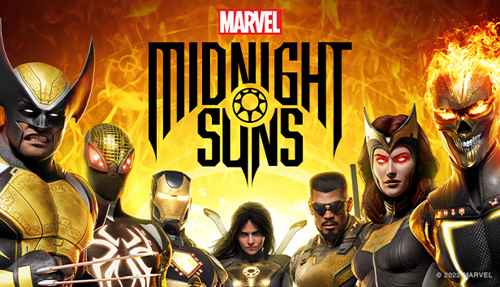