Mario and the gang are back for their 15th party in Mario Party: Star Rush! This latest portable party offer players seven different modes and over 50 mini-games to enjoy. The games primary mode, Toad Scramble, shakes up the rules with a new movement system that sheds the previous pre-set paths of previous Mario Party games. Along for the ride are the usual cast of characters and new boss battles. Is this party worth attending? Get your party hat on and let’s find out.

Mario Party: Star Rush offers a vast assortment of different modes, and Nintendo should be commended for making an effort to spice up the Mario Party formula with new ways to play. The games primary mode is Toad Scramble where you’ll compete as Toad, against three other Toads. The objective of this mode is to roll the dice and make your way to a “Boss” who holds a star. During the boss fight, all four players will fight, but the player who does the most damage will win the star. Once all the bosses on a map are defeated, you’ll be shown an awards ceremony where additional coins and stars are handed out and a winner is determined. In previous Mario Party games, you pretty much moved along a pre-set path. In this mode, you’ll be able to move your character in multiple directions, giving you far more options in terms of strategy and the maps are design with this in mind. A good comparison is the movement system in Fire Emblem games. Along the way, you’ll come across the usual Mushroom Kingdom crew, like Mario and Peach, who will aid you, as long as you collect them before your opponents do! Another key feature with this mode is that all four players roll and move at the same time, so you won’t know where your opponents are moving until you move as well. Certain situations will require you to face off in mini-games which will generally net you more coins (coins will be redeemed for Stars during the awards ceremony).  Overall, Toad Scramble is a fresh take on the Mario Party formula and pretty fun.

“Mario Party: Star Rush offers a vast assortment of different modes, and Nintendo should be commended for making an effort to spice up the Mario Party formula with new ways to play.”

In addition to Toad Scramble, there are six more modes to play. Including the Rock Band-esque Rhythm Recital (which features classic Super Mario songs) and the puzzling Boo’s Block Party. One of my favourites was Coinathalon. Coinathalon features a set path for you and your opponents to move along, but the gameplay takes place wholly inside of three mini-games (the mini-games change each time you play). Within the mini-games, every coin you collect moves you forward a space on the board. Ultimately, it’s a race to collect the most coins within these mini-games. Along the way, you’ll earn power-ups that could benefit you or hinder your opponent. While Toad Scramble could take 20 or more minutes to playthrough (depending on the map and difficulty you choose), Coinathalon sessions were usually five minutes or less.

Mario Party: Star Rush offers a local multiplayer mode with two options, a limited “download play” option, or a more robust option that requires gamers who don’t own the game to download a free Party Guest edition. Unfortunately, Nintendo has decided not to include an online mode of any sort. Most of the single player modes are available for play in local multiplayer, and as is the case for most party games – playing with friends is just far more fun than playing against the AI. 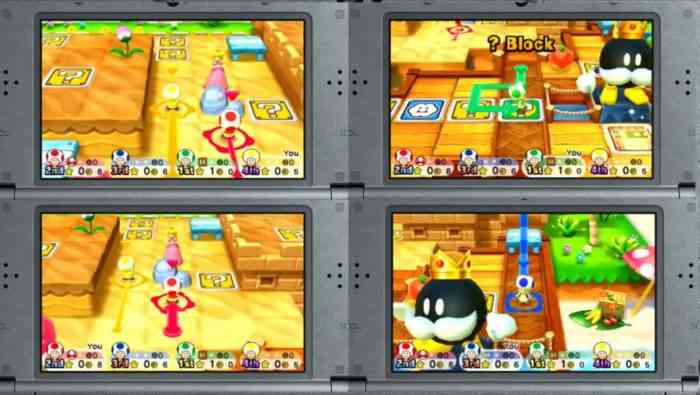 Mario Party: Star Rush has a few additional bonuses worth noting. Each time you play, you earn points towards your Party Meter. Earn enough points and you’ll collect the next unlockable; whether it be a new game mode or a new character. There is a character museum which shows all the games characters with a brief write-up (Note: do not tap the Amiibo button in the Character Museum unless you have a reader or New 3DS – you’ll get trapped in an infinite loop of pressing A and the game attempting to detect an Amiibo. You’ll actually have to power down your 3DS to fix it!). Speaking of Amiibo, the game utilizes some of the Mario franchise Amiibo in a variety of ways from offering additional power-ups and support or unlocking bonus content within certain modes. It’s not much, but at least Nintendo continues to give us reasons to take our Amiibo off our shelves.

Mario Party: Star Rush is really nothing spectacular in terms of graphics. The last Mario Party game, which was on Wii U, looks significantly better – and while this will be attributed to better hardware, it’s still disappointing seeing my Mairo Party graphics downgraded. The maps follow the same tired themes you’ve seen before in Mario Party games, like the tropical theme, Bowsers castle theme, etc. It begs the question why Nintendo hasn’t expanded Mario Party to include some characters and worlds from other franchises. Why not add Kirby, Meta-Knight, King De-De-De and include a map or two based on the Kirby franchise to spice things up a bit? As for the sound you’ll hear all the classic Mario sounds you’re accustomed too and the soundtrack is fun and upbeat in typical Mario fashion. 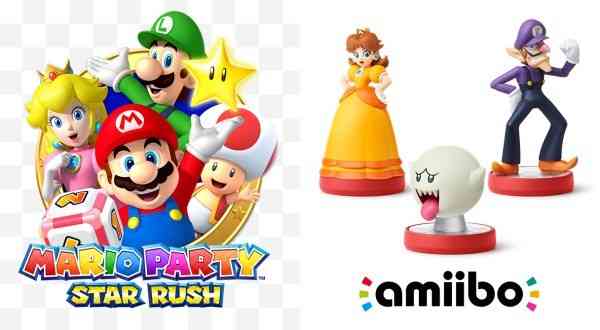