Nintendo has always been at the forefront of gaming innovation and they’re back at it again by utilizing one of their most beloved franchises. Mario Kart Live: Home Circuit aims to combine the excitement of the Mario Kart franchise with the fun of racing RC cars. By utilizing augmented reality (AR), gamers will be able to race an actual Mario or Luigi RC car around a track of their own design, with the gameplay projected on the TV or Switch screen. It’s not the first time Nintendo has combined real-world toys with video games, as we’ve seen with their extensive line-up of amiibo. Will Mario Kart Live: Home Circuit drift into the hearts of Mario Kart fans or will it receive the dreaded Blue Shell of hate?

When you first crack into the Mario Kart Live: Home Circuit box, you’ll find a real-life Mario or Luigi RC car, four gates, and two directional signs. The first thing you’ll want to do is charge your brand new RC car with the included USB-C cable. While your RC is charging, you’ll need to download the free Mario Kart Live game from the Nintendo eShop – so an internet connection is required initially. Next up will be the course creation, which is broken down into two parts; real-world and in-game. The real-world course creation is where you’re only limited by your creativity and living room space. You’ll first line-up the four enclosed gates in sequential order. These gates will be projected in-game and will serve as in-race checkpoints. Like me, you’ll probably start with a simple oval style track, then get a little more adventurous as you play. The two directional signs are purely optional but add to the overall course design as they’ll also be projected in-game. Eventually, you’ll want to get creative, by adding tables to simulate tunnels and toys alongside the track to simulate your adoring audience. Once you’re happy with the layout of your track, then it’ll be time to register it in-game. It’s worth noting that the range of the RC car from the Switch was about 22 feet. 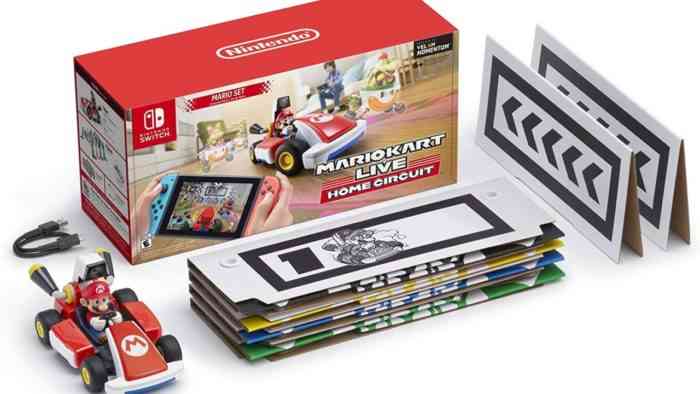 At this point, you should have your RC car synced up to the Switch. You’ll see your living room displayed on your TV or Switch via the camera just above Mario’s head. You’re free to drive the RC car around and get a feel for the controls, which are all handled via the Switch controller. Here you’ll see each of the gates and directional signs you laid down light up in-game – the effect is quite neat. Now it’s time to bring your real course to life. To create your in-game course, you’ll first drive your RC car up to Gate 1 and Lakitu will paint your tires purple. You’ll then drive the course, through each of the four gates, creating the course layout. Once you’ve driven the lap, you’ll be ready to dive into the meat of the game, the Grand Prix.

The Grand Prix is where all the action happens. Fans of Mario Kart will instantly be familiar with the 8 different Grand Prix Cups, ranging from Mushroom Cup to Lightning Cup. Each cup consists of three races spread over three different courses, or rather, three different course themes that are merged with the course you created. Each race consists of five laps against four randomly picked Koopalings. You’ll earn points based on your placing in each race, which will accumulate over the three races to earn you a final ranking at the end of the cup, with the goal of earning as many gold trophies as you can. The format isn’t too different from previous Mario Kart games, however, you’ll be racing the same course layout during every single race within a cup. In fact, if you’re so inclined, you can complete every Grand Prix cup with the exact same course layout. In terms of difficulty, you’ll start off on the relatively slow 50cc speed, and eventually earn enough trophies to race at the 100cc, 150cc, and finally 200cc speeds. 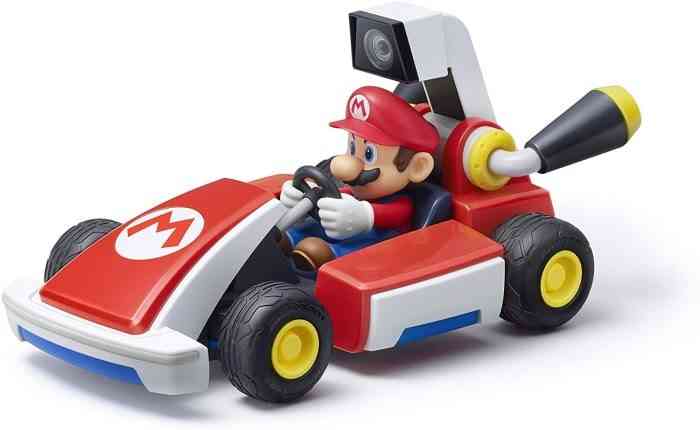 Now here is where the AR aspect really takes flight. You’ll see a constant live view of the track surroundings as you race RC Mario around the course. Layer on top of the real surroundings are augmented aspects, such as power-ups, coins, the Koopalings, course obstacles, and the track. For the most part, these aspects maintain their locations relative to the course relatively well, but at times, you can see them bounce a bit – as if the Switch loses track of where they should be. Each course has a unique theme, not unlike the courses we’ve seen in previous Mario Kart games. One course takes place underwater, and the entire screen has a sort of watery-bubbly effect. Another course takes place in the jungle, and each of the gates have Piranha Plants affixed to them, ready to snatch you up if you drive too close. The variety in the courses is quite impressive.

As you race, obstacles, Koopalings and power-ups will impact your performance for better or worse. If you’re hit with a red shell, your RC car will temporarily stop. If you use a Mushroom, you’ll get a nice little boost of speed. Unfortunately, one of the games biggest issues rears its ugly head here in the form of a power-up. When a Koopaling uses a Chain Chomp against you, you’ll temporarily be dragged around by the crazy Chain Chomp as it pulls you to-and-fro. Now, it is impressive that they designed the RC car to actually emulate the to-and-fro tugging movement, however since you essentially lose control of your RC car, this often leads to the RC car ramming into the gates or other real-world objects. And if you knock the gates too many times, and you’ll have to get up and manually put them back in place. One of the course obstacles, the high winds, has a similar tugging effect on the RC car, but fortunately, that’s only an issue on a couple courses. 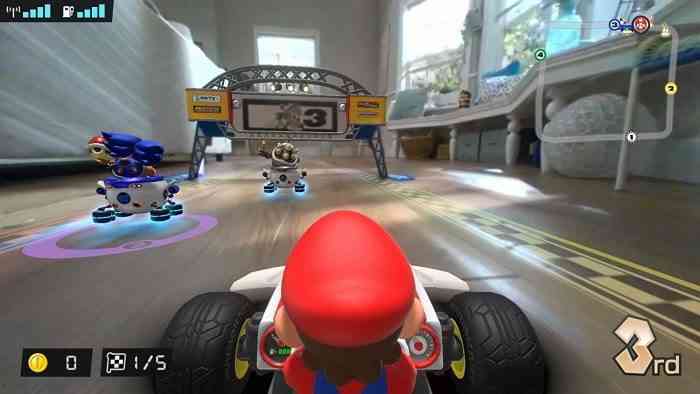 As you play, you’ll collect coins throughout the course which unlock a variety of different items such as new suits for Mario, new cars, and new radio stations. Finishing certain cups will unlock new course themes, gates, and obstacles. When you’re not racing in the Grand Prix, you can design your own tracks by using different themes, obstacles and gates. I was a bit worried that most of the in-game content would be rehashed content from previous Mario Kart games, but in truth, there was quite a bit of originality here, and I wouldn’t be surprised if some of the course themes end up appearing in Mario Kart 9.

Unfortunately, I wasn’t able to experience the mutliplayer mode. Supposedly, the game supports up to four players, however, the cost of admission for each player is a Nintendo Switch and a copy of Mario Kart Live: Home Circuit. I imagine most families will be enjoying this as a solo, take-turns, experience. It’s a bit bizarre that the game couldn’t be played with one Switch, one TV and multiple RC cars via splitscreen, but maybe that would be too taxing for the Switch. 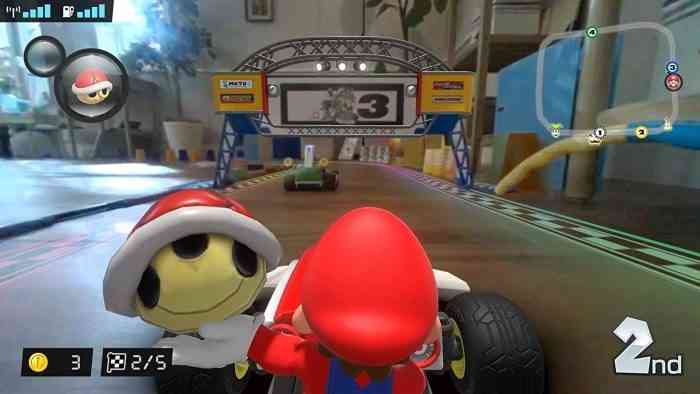 Mario Kart Live: Home Circuit is a unique experience that is really impressive at first glance. I enjoyed putting the courses together and exploring the variety of Grand Prix’s, but after a while, the experience does lose its charm much faster than normal Mario Kart experiences. I think this is in part due to the fact that there really is only so many ways I can set up four gates in my living room, the game gets stale because my ideas get stale. Some of the in-game obstacles that impact your RC cars steering, like the Chain-Chomp power-up and the high winds, often caused me to crash into living room objects or knock the gates out of place. This was incredibly annoying and really ruins the experience more than a badly timed Blue Shell. Moreover, the cost to play multiplayer is way too steep, keeping this ultimately a single-player experience for most families. While there is a nice amount of variety in courses, there really isn’t much to do after you master the 200cc difficulty – assuming you haven’t lost interest long before then. 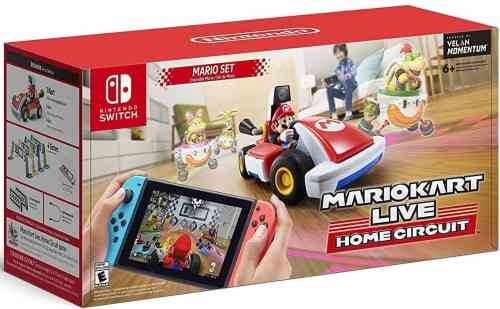