I am sure we can all relate to stories of children who grew up playing video games and became engrossed in the fantastic worlds companies, like Nintendo, created. But few of us grow up to become a developer for a major game company like Nintendo. In this interview, CHIN Yong Kian, who founded Chinykian Games, shares his journey from fan to developer. On July 27, 2020, he will be launching his new game Serious Scramblers on Switch. 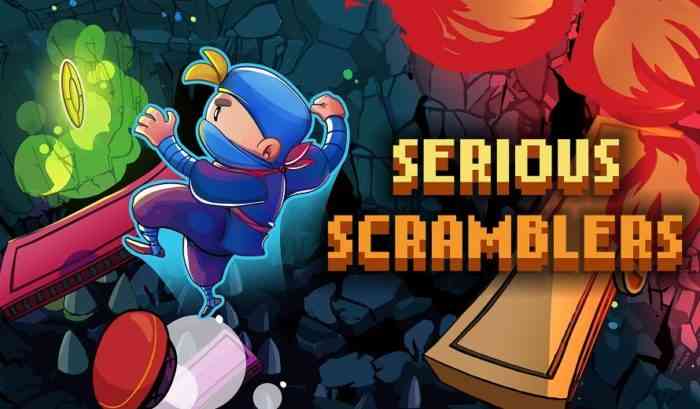 Chin Yong Kian, or better known as Chiny, fell in love with video games early in his life. “Getting to experience the Game Boy and the Genesis sparked my interest in gaming and likely planted the seed for my pursuit of an education in games development” he explains. In particular, Metroid Fusion on Game Boy Advance made a lasting impression, “I love all the details in the game – the foreshadowing of boss encounters, the sense of urgency induced by the narrative, the atmosphere and the knuckle-white moments where you must run from the doppelganger, Sa-X. After I played this game, I was sure I wanted to pursue a career in games”.

To pursue this dream, Chiny enrolled in a game development program at Digipen in Singapore. Through that experience he met like-minded people and went on to form the game company Rotten Mage. Their flagship title was Spacejacked, which was less than successful. At the time, the developers were still naïve and inexperienced and Chiny says the game “bomb[ed] so hard financially it’s almost hilarious.” Chiny took this lesson in stride, and did not give up on his dreams.

His next foray into game development was creating Serious Scramblers. The game is inspired by the mobile game Rapid Roll. So initially, Serious Scrambler was created for the mobile market. It was released on iOS and had more than a quarter million downloads. Despite this success, Chiny was not quite happy with the game. He explains, “less than 1 percent of the people who played the game have ever beaten the final boss. This made me questioned if the game was suitable for the average mobile audience. Consequently, I began reworking and improving aspects of the game so that I could bring it to other platforms, Switch being one of them”.

Releasing a game on Switch is not an easy task. Developers have to pitch their game idea to Nintendo and there is a lengthy approval process. The development environment also requires investing in purchasing the development kit and hardware to run the development play tests. Also, although many game IDEs (development tools) are free for individuals, they have large fees when used to make commercial games. An important resource for Chiny in this process was Chris Wade, who developed the game Sausage Sports Club. To assist developers, Chris Wade posted his pitch as an example of what a successful pitch looks like, which was instrumental in Chiny’s success.

Now, much to Chiny’s glee, Serious Scramblers will be available in the Switch market. The game is an action arcade platformer with a delightfully classic sounding soundtrack. Chiny worked with the composer Dmitry Zhbanov, known as disyman, to create music that was “upbeat and fits the tone of the game.” Below, you can see a trailer of the game, which features the music:

It took one and a half years to develop the game, and longer to adapt it to the switch console. As a sole developer, who had a part-time job, Chiny did not have much time to tackle the problems that arose during the development process. “Much of the design challenge I faced revolved around the random generation of platforms and obstacles. Naturally, the spawning of obstacles should never be truly random, and a lot of effort was invested into writing rules for making the level generation as fair as possible.” says Chiny.

To balance the difficultly of the game, Chiny relied on friends willing to play test the levels. He says “[t]he youngest among the testers was 13 years old (I think) at the time and was the first to beat the game. Much of the game’s final level was tweaked based on his feedback. His interest in my game and his willingness to offer feedback is something I am super thankful for”.

The play testers were essential in the success of this game. When asked if he would like to acknowledge anyone’s special contribution Chiny said “I want to give special thanks to all the testers who have given me valuable feedback (shout-out to Ottotinne) that helped moulded the game!”

You can find his game on Switch here. The game is $1.99 USD, but will be on sale for $1.79 until August 31st. If you do not have a Switch, you can also find it on Steam here. Please tell us what you thought about the game in the comments below. I am sure Chiny is eager to hear your feedback!

Are you hoping to develop a game on Switch? We would love to hear about it in the comments below.

Doom Eternal’s Original Main Menu Music Is Back
Next The Best Indie News & Video Games August 23-30, 2020
Previous Outrider’s Spotlight – Everything we Know About the Devastator Class