Last year, the gaming waters turned bloody with the arrival of Maneater, the self-proclaimed shARk-PG that puts players into the role of a shark. It’s combination of engaging story, unique gameplay, and witty humour made it a beloved hit for many gamers. Even our COGconnected review gave it a solid score, noting only a handful of minor grievances. Now, a year later, Maneater makes its splash onto the Switch. Just imagine some unlucky vacationer, floating in the ocean on a pink flamingo raft, playing Maneater on his portable Switch, when suddenly a shark bursts from the sea and swallows the poor soul whole. Morbid? maybe, but imagine the headlines! And with that, we turn our attention back to the game at hand and ponder if this Switch port, essentially a year late, is worth diving into.

For the uninitiated, Maneater puts players in the role of a shark who starts off as just a tiny little shark pup that eventually grows and evolves into an ocean powerhouse. The story is framed like a Discovery channel documentary, with a camera crew following shark hunter “Scaly” Pete and his crew as they hunt for sharks in the Gulf Coast. Each chapter in the game is treated like a new episode, complete with the Maneater watermark and a clever hashtag.

The game begins with a tutorial mission, where player’s first take on the role of an adult shark who is subsequently captured and killed by “Scaly” Pete. But in a shocking twist, “Scaly” Pete discovers the adult shark is pregnant, and rips the baby shark (doo doo, doo doo) out of its mother’s womb, and tosses it into the ocean – but not before the baby shark leaves his mark on the hunter. From this point, players will take control of the baby shark, on its quest for vengeance.

Watch Out Boy, She’ll Chew You Up

Starting off as a baby shark, you’ll first roam the waters of the Bayou, a swamp like area invested with catfish and alligators. Eating different types of prey will enable our shark to grow and evolve, eventually opening access to another area of this massive coastal area. Missions pop-up throughout the various regions. Completing enough missions will move the story along, opening up new areas, and new battles against your nemesis “Scaly” Pete and his legion of shark hunters. It’s a sort of lather, rinse, repeat sort of formula, but there are elements that help prevent the game from becoming too stale. 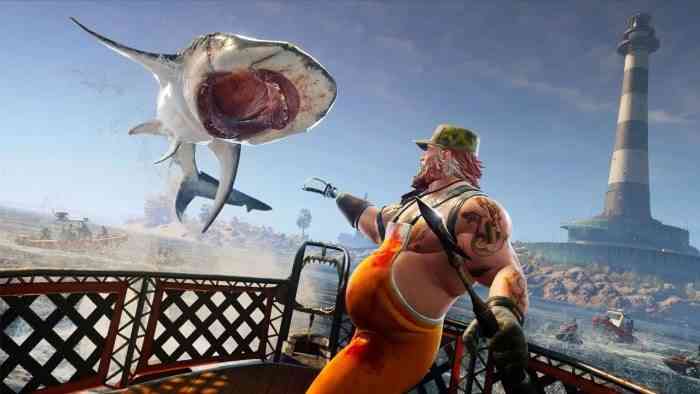 Competing different objectives or finding specific hidden collectibles, will give players the ability to customize the shark to better suit their style. Each region also contains a unique look and feel, along with a fresh assortment of prey, and predators, to do battle with. Another neat element is the inclusion of Apex Predators – a variety of marine life that have been amped up, offering up some intense boss fights. I don’t want to spoil too many of the areas you’ll unlock, but a personal favourite was beaching my shark on a golf course and snacking on some golfers. Fore! 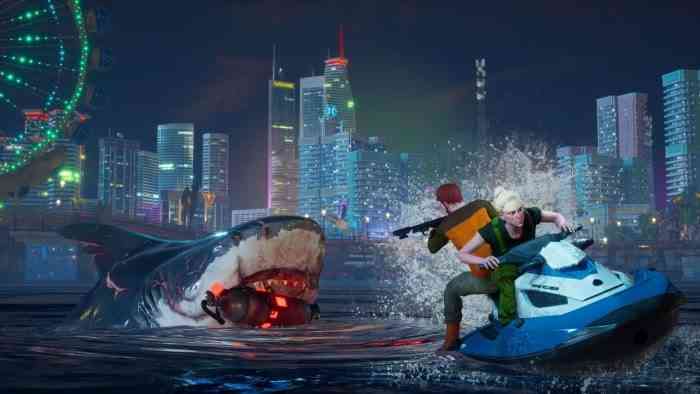 The game is entirely narrated by the extraordinary Chris Parnell. His delivery is very entertaining, providing a steady flow of humour in a matter-of-fact sort of way that often makes you wonder if what he’s saying has actual scientific merit. Throughout the game, you’ll come across a vast number of hidden locations. These locales often provide some pop culture reference and yet another opportunity for Parnell to express his wit. If I die tomorrow and someone deems my life worth of a documentary, please see if Chris Parnell would tackle narration duty. With that said, as you dive deeper into the game, you’ll find some of Parnell’s one-liners get a bit over-used, but it’s only a small distraction.

So far, we really haven’t had an opportunity to talk about this being the Switch version, and that’s because the Switch version includes every bit of content the previous Xbox and PlayStation versions included. In fact, the Switch version is a mirror image to the previously released versions, albeit a couple technical issues. The first issue is the visuals. Yes, the Switch version is definitely a step back from the superior Xbox and PlayStation versions. Everything seems a bit muddier. There’s less clarity in the textures. The Switch just simply isn’t capable of producing the same visual fidelity of it’s competitors. That’s not to say Maneater is ugly, far from it, it still looks good – just not as good as the other versions. Another issue I noticed was an increase in load times between regions. On PlayStation, rarely did I hit a load screen while moving from region to region – not so with the Switch. The load times aren’t that bad, but they’re there.

Maneater is an absolutely brilliant game. In fact, it was one of my favourite games of 2020. The action-rpg style of gameplay combined with the shark mechanics creates such a unique and fresh experience, it’s hard not to recommend it to any gamer. Keep in mind though, this is about a shark that will eat damn near everything, including people, so if you have some younger shark fans in the house, you might want to reconsider exposing them to it. Though truth be told, my little guys tried it and got a kick out of it. It’s worth noting that the issues we noted in our original review are still present in this version, including the sometimes awkward controls, repetitive gameplay, and occasional wonky camera. Still, this is a game that I could not put down when I originally played it on PlayStation, and I’ve enjoyed re-experiencing it on the Switch, despite the dip in visuals. If you have the means of playing Maneater on an Xbox or PlayStation, that would be my recommendation. If not, then the Switch is a competent port that will give you the same overall experience. Regardless, Maneater is friggin’ jawesome – don’t miss out. 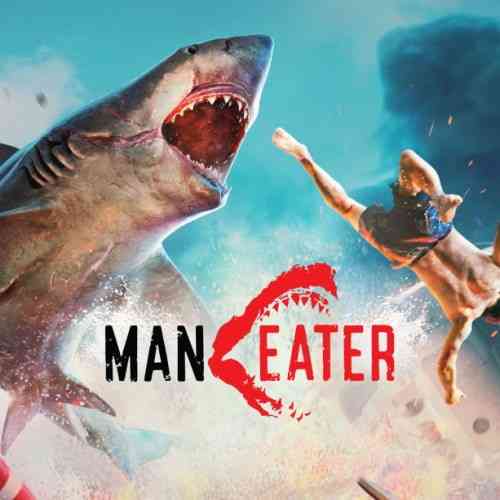 Win a Copy of Maneater For Nintendo Switch