Loop Hero was easily one of the best games of 2020, and I was overjoyed to hear it was being ported to Nintendo Switch. Then I actually got my hands on Loop Hero, Switch edition. While it’s perfectly playable and even enjoyable, this game was definitely designed for PC and it shows. I once described Loop Hero as a patchwork game with no right to work as well as it does. This applies to Loop Hero on Switch. I also stated that Loop Hero comes equipped with a surprisingly somber narrative about staying determined even in the face of the end of the world. This is also still present in the Switch port.

In terms of graphics, audio, and overall presentation, the Switch edition is exactly the same as the PC version. I’m not even going to touch on the game itself. Loop Hero itself is still fantastic. If you need any more information, check out my previous review of Loop Hero. The rest of this review is just going to focus on how the game made the leap between platforms, mechanically speaking. And let me tell you, there’s a lot to talk about.

Putting the Apocalypse on Pause

Not much has changed in terms of core game mechanics, but how the player accesses those mechanics has. Thanks to the Switch’s lack of a mouse, players now change between Adventure and Planning mode by pressing the Y button. Selecting items is done by pressing ZR to pause the game and the joysticks to navigate the menu. Cards can be accessed by pressing ZL and placed with the joysticks. However, I recommend using the arrow keys for greater accuracy, especially if you’re suffering from joy-con drift. I had plenty of trouble accidentally misplacing important cards in the PC version and I’m not willing to risk fighting the joysticks. 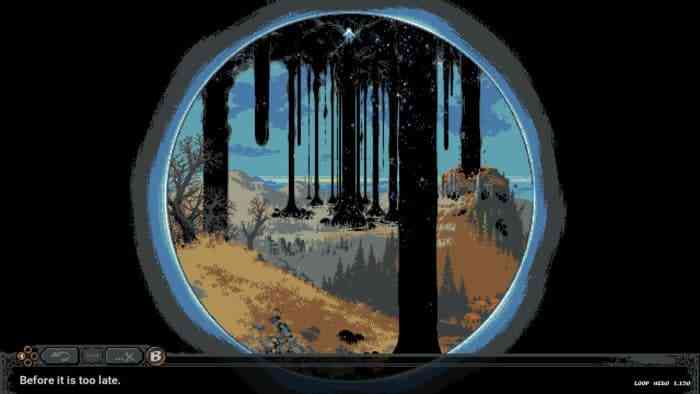 The game now pauses automatically when you receive loot or cards. This is at once useful and irritating. On one hand, it fixes the problem of the Switch not having a mouse you can rapidly move into the inventory screen to pause the game. On the other hand, it does mess with the flow of battle. The game also pauses automatically when you’re over the campfire tile, which is convenient and kinda disappointing for similar reasons. The PC version of Loop Hero was one of the most stressful and engaging games I played in 2020 despite having a battle system totally detached from player input. The Switch version lacks some of that frantic edge.

Because the game’s pace has changed, I found it hard to remember when I needed to manually pause. I kept forgetting I needed to put the loop on hold to place a tile at will because I was so used to game pausing automatically. You barely even need to pause the game manually, which completely changes the tone and pace of gameplay. You can still pause in the middle of battle to swap out your gear, at least, which is fun. It’s also pretty to cancel using cards or items. Loop Hero’s gameplay is so reliant on careful hand movements that it would be easy to mess this up. 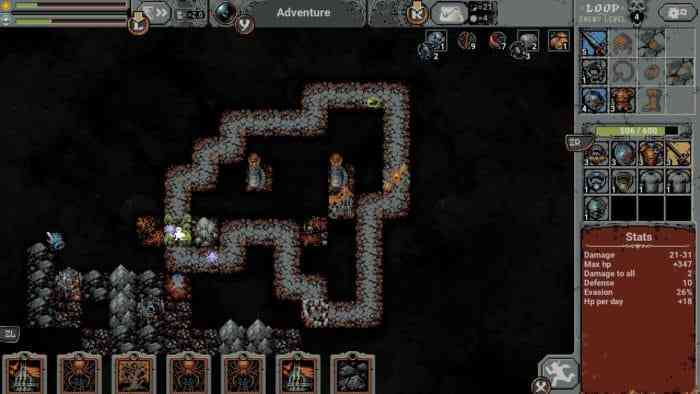 The single biggest complaint I have about Loop Hero’s mechanics is that it’s hard to figure out how to open certain menus without using the touchscreen. Unfortunately, this includes the option to control the speed of battle and the inventory. While these aren’t the most important elements of the game by any means, they do add a fair bit. I highly recommend playing this game on handheld or tabletop as a result. You can access the base-building portion with a series of button presses. However, it’s much easier to just use the touchscreen. 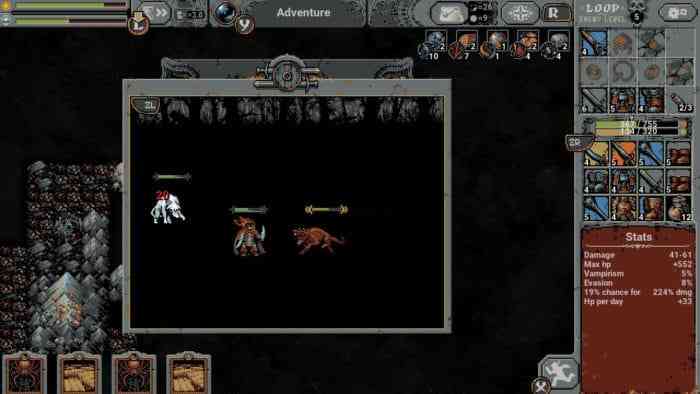 More importantly, you also can’t really rearrange your inventory to hold onto important items you don’t necessarily want to equip just yet without using the touch screen. That’s a major problem because a solid 50% of Loop Hero’s appeal comes from high-stress inventory management. If you want to check the stats on your equipped gear, you also need to use the touch screen. I don’t think this game was meant to be played plugged into a TV.

All in all, this is a much more relaxed experience than the PC version, for better or worse. It’s still incredibly satisfying to one-shot an enemy as the rogue, tank as the warrior, and unleash armies of the dead as the necromancer. If you didn’t get the opportunity to play Loop Hero the first time around, I heartily recommend checking it out on Switch. But if you can play this game on PC, you probably should.

There’s nothing overtly wrong with the Loop Hero Switch port, especially given the game’s control scheme. It’s just hard to beat the original. 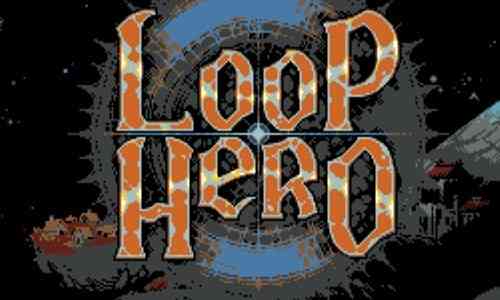