Over the past couple of years, I have become a fan of ROCCAT’s line of gaming mice. At the time I reviewed the Kone Pro Air, I considered it the best mouse I have ever owned. Likewise, both the ROCCAT Burst Pro Air and Kone XP are outstanding. ROCCAT’s mice consistently get high scores from us and it’s easy to see why. When it comes to performance, their look, and feel, ROCCAT mice never disappoint. So it comes as no surprise that the ROCCAT Kone XP Air is just as good (if not better) than all the other ROCCAT mice I have used to date.

Clearly the ‘if it ain’t broke then don’t fix’ approach was taken with the Kone XP Air. It is nearly identical to the Kone XP I reviewed earlier this year. The XP Air has the same design, same RGB lighting, both have 15 buttons with 29 possible functions, and are equipped with the same sensor. Except the XP Air allows you to go completely wireless, has a snazzy charging dock, and the RGB lighting has been refined giving you up to 100 hours of battery life.

The only drawback is the price. It’s around $90-100 more than the wired Kone XP. At around $170usd this makes the Kone XP Air one of the most expensive mice I have ever used. It is a little more than I am typically willing to spend on a mouse. Yet I have to say, it’s pretty awesome and that charging dock is truly a game changer. 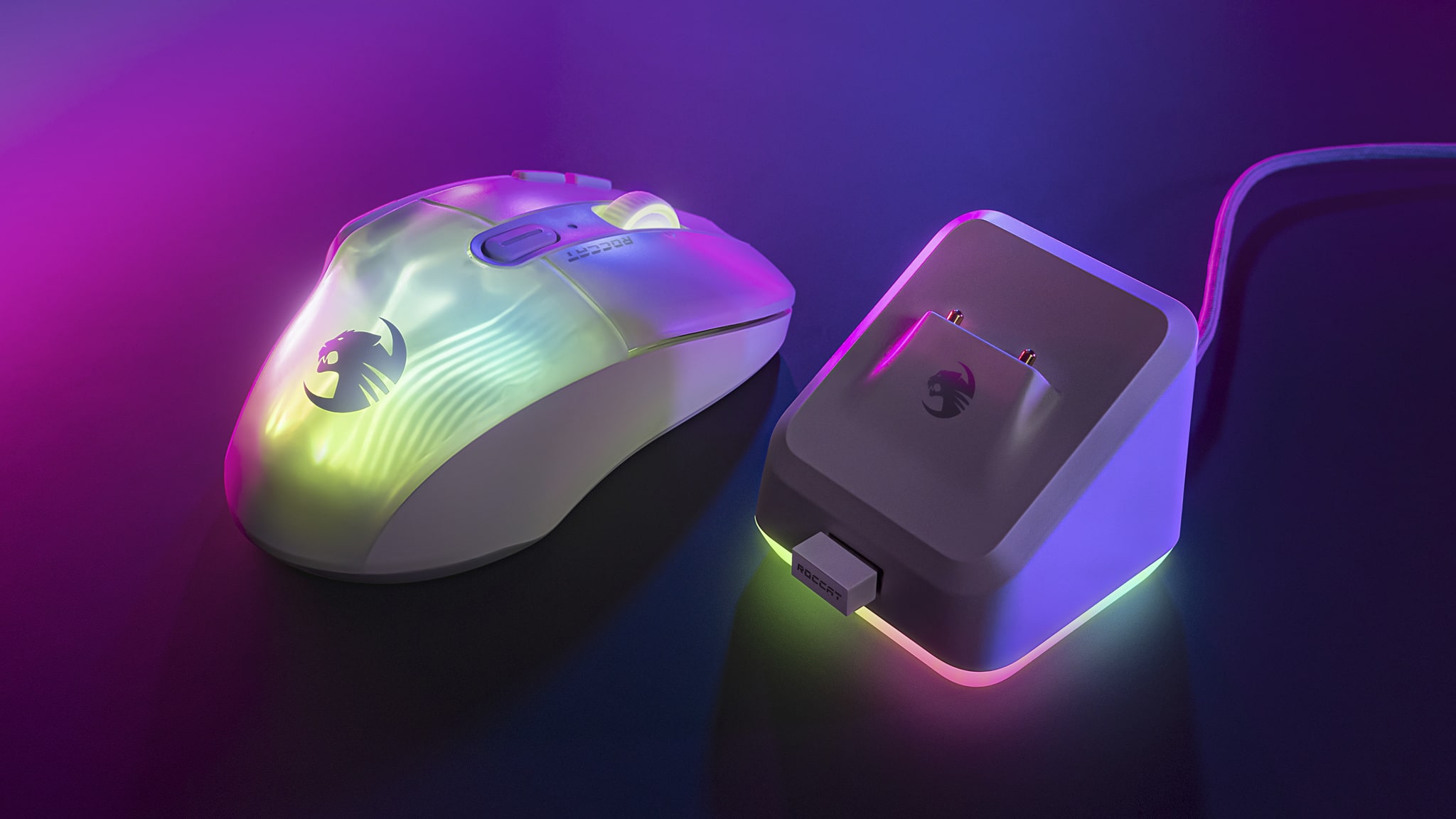 I’ve always preferred wireless mice but here’s the thing; they tend to run out of battery juice quickly. I am constantly left having to plug it in. I get to the point where I just leave it wired as unplugging and plugging it back in is a bit of a nuisance. Inevitably, my wireless mouse stays wired. That is no longer an issue with the charging dock. Every night for the past couple of weeks, I rest the mouse on the charging dock and it works just as advertised. The base of the charger lights up as well, so it looks great on my desk. Needless to say, I love this charging dock.

Compared to ROCCAT’s Burst mouse, the XP Air feels ‘meaty’. It has some good weight to it and seems super durable. I accidentally dropped it during the review period, and it’s no worse for wear. I also love the overall look of this mouse. The Kone XP Air features 3D RGB lightning under that sharp-looking translucent shell. The RGB lighting is fairly common nowadays, but it still looks great with its 5 programable zones. This mouse is eye-popping and its overall aesthetic screams premium product.

Likewise, it has a strong ergonomic feel and fits great in my hands. It is easy to maneuver, and comfortable and I never felt any strain on my hands or wrist. It is effortless to move and super responsive as well. 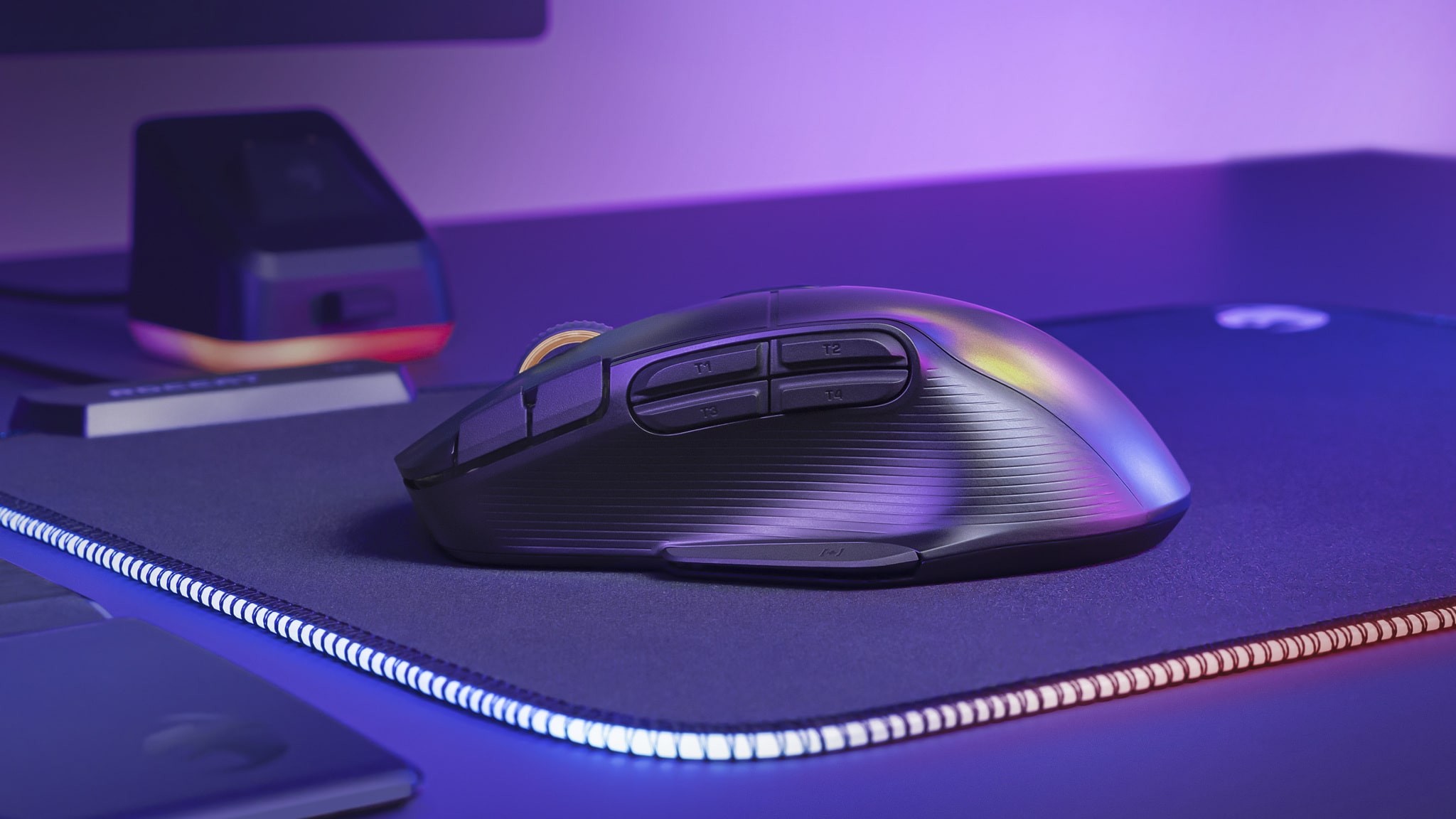 The Krystal 4D scroll wheel feels great and works exactly as it should. Granted, I have had issues with ROCCAT scroll wheels in the past. I cannot say how the Kone XP Air’s scroll wheel will stand the test of time. I’ve had a couple of Kone mice over the years I’ve had to get replaced due to malfunctioning scrolling wheels. I’m optimistic the issue won’t return but nevertheless, it’s something I am monitoring.

While you can (and I have been) using this mouse for day-to-day keyboard use, it truly shines in the gaming department. It’s a mouse made for gamers. Its multi-button design and 4D scroll wheel give you more than enough options and customizations. Not to mention the buttons and switches are incredibly responsive and lightning fast. The buttons themselves produce satisfying clicks and the clicks are not all that loud either.

The price point will give many pause; however, the ROCCAT Kone XP Air is a premium mouse designed for a serious PC gamer. The charging dock is a game changer and perfect for those looking to remain wireless at all times when gaming. It’s hard to find any faults with the XP Air as it’s just about the best mouse I have used to date.