I admit it. I’m old and I fondly remember playing the very first King’s Quest when it released way back in 1984. I was only seven at the time and I hardly knew what I was doing but it was then and there that my lifelong love for adventure games was born. In the 80s Sierra was the unequivocal king of adventure games with not only King’s Quest but other series such as Space Quest, Police Quest and Leisure Suit Larry all seeing great success and multiple sequels. Sadly, as times changed, the venerable adventure game genre saw a downturn and while it never truly disappeared it faded into relative obscurity. Fast forward to now and we are in the midst of a resurgence of the genre and the rebirth of one of the game’s that started it all.

Now, thanks to Sierra and developer The Odd Gentlemen, King’s Quest is back in an episodic series featuring the return of King Graham himself. In Chapter One of the new series ‘A Knight to Remember’ we are introduced to Graham’s grandchildren as he regales his granddaughter Gwendolyn with pun infused tales of his youth. Focusing on the young Graham’s first days in Daventry and his quest to become a knight, this reintroduction to the series oozes charm, humour and plenty of nostalgia. While it took me some time to become invested in the story, as it starts out as a bit of a slow burn, the aforementioned charm won me over in short order. 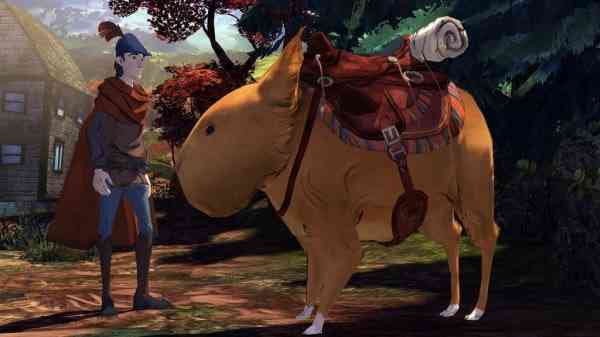 Voiced by Doc Brown himself, Christopher Lloyd, the aged King Graham introduces us to the new and improved kingdom of Daventry. His younger self has entered a tournament to become Daventry’s newest knight and as his journey progresses he comes across some of the best characters I’ve met in a game in some time. Characters voiced by Wallace Shawn and Zelda Williams (as a remarkably Roberta Williams looking Amaya Blackstone) add some more star power to the cast but pretty much everyone you come across is portrayed to near perfection. Of course, the voice work could be impeccable but if the story didn’t back it up, it would all be for naught. Luckily there’s humour abound everywhere and plenty of jokes if you’ve got a good ear for them. Perhaps the team at The Odd Gentlemen tried particularly to cater to their audience of old farts because the Bob Seger reference (of a song released in 1976) I caught had me in stitches.

“Clearly inspired by, and respectful of its source material, [The Odd Gentlemen] manage to meld old school nostalgia and new school gameplay together into one charming package.”

The gameplay has shifted from the old school, point and click style to the more interactive adventure style popularized by developers like Telltale over the past few years. The puzzles themselves can be tricky at times, quite often involving some tedious back tracking (why can’t Graham run?), but in the end they all make sense. Sure you may resort to some trial and error but critical thinking is the order of the day. If you’ve ever played adventure games in the past you’ll know what I mean when I say that sometimes the answer to a conundrum is about as nonsensical as they come. Use this pickle to unlock that door? Hey, why not? King’s Quest totally avoids this. In regards to choices you make having consequences later on in the series I’d have to say it’s a mystery. At one point a choice I made was referred to as having ‘rippling consequences’ but I haven’t seen anything come to fruition yet.

The backdrop to all this is the gorgeous, hand painted graphics that truly bring Daventry and its cast of misfits to life. Taking full advantage of Unreal Engine 4 it runs fairly smoothly as I only encountered a small number of hiccups in my play through. Hiccups in other areas were hard to find as well although I did encounter a spot with a visibly speaking Bridge Troll and no actual voice. Again, minor at best as everything comes together nicely.

The Odd Gentlemen have done a fantastic job at reintroducing us to the King’s Quest series. Clearly inspired by, and respectful of its source material, they manage to meld old school nostalgia and new school gameplay together into one charming package. As Chapter One rolled to a close I couldn’t help but smile wide. Very likely just as wide as I did as that seven year old playing King’s Quest: Quest for the Crown for the very first time. Well played, odd gentlemen.

The Expanse: A Telltale Series Revealed at The Game Awards

Tales of the Borderlands Is Coming Back To Digital Storefronts
Next Call of Duty: Advanced Warfare Reckoning Review – Call of Duty’s Xbox Exclusivity Swan Song
Previous Blues and Bullets Episode 1 Review – Gritty Noir Mystery with a Touch of Dark Humour