Say the name Eliot Ness and many people will recall the legendary prohibition era agent who was the inspiration for the 1987 move release, ‘The Untouchables’. Serving as the inspiration for this episodic mystery from A Crowd of Monsters you are put in the shoes of the man himself. In this alternate timeline Eliot is retired from his position. Unable to solve a string of cases related to missing children around the admittedly corrupt city of Santa Esperanza, Eliot has opened a diner conveniently named Blues and Bullets. Soon enough, a relative of notorious gangster Al Capone (who got off relatively easy, in this alt-history timeline) contacts Eliot to bring him back into the life he left behind. Abductions and ritualistic murders soon take the stage, and what started as a seemingly average crime story turns into something much more sinister. As with any adventure game in its first episode, I’m left with more questions than answers, and that’s just the way I like it.

Over the course of two hours, we are subjected to a variety of locales in which we really get to see Blues and Bullets’ stylized graphics shine. I’ll admit, I’m a sucker for a game that goes for its own aesthetic, and the graphics are definitely a standout quality. The washed-out, ‘Noir’ visuals may not appeal to everybody, but fans of noir titles and movies such as Sin City will not be disappointed. Unfortunately, I wish I could say the same for the animations of each character. The interactions frequently have characters moving in an uncanny-valley sort of effect, and despite the high quality of voice acting (Doug Cockle as Eliot) on the primary cast, it gives the game an almost “B-Movie” feel, at times. The supporting cast isn’t quite as solid at delivery, but they serve their purpose well enough. It’s my only real gripe with the game, to be honest. The mechanics and story are strong enough to make up for the jittery animations and fluctuating quality of voice acting. 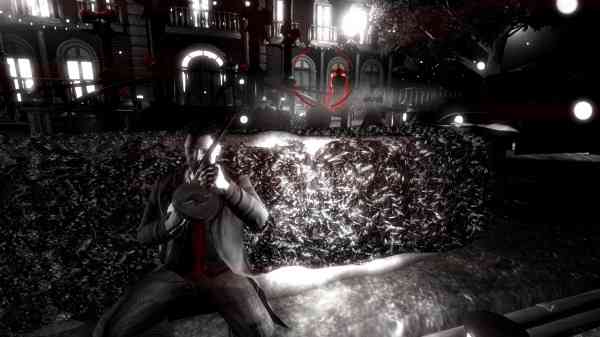 Mechanically, it plays like your standard adventure game. You come across various objects with which to interact, and move the story along at your pace. One aspect that stood out to me is the way that you investigate crime scenes, which reminded me of LA Noire, in a sense. You go about the scene, gathering various clues (and boy, is it a mess to sort out), and eventually piece the scene together via a crime-board, which is easily accessed. Clues fit in where they should, and if you attempt otherwise, the game firmly reminds you that it isn’t a good fit. As you slide the pieces into place, you begin to get a better idea of just how everything went down. This investigative element is supported by a few shootout sequences, which serve their purpose well enough. They aren’t anything out of the ordinary, but they’re still satisfying to get through.

“Abductions and ritualistic murders soon take the stage, and what started as a seemingly average crime story turns into something much more sinister.”

The story is well-paced, minus some characterization issues. One character came into the scene, and left me confused as to if he’d come back later on or not. It’s not something I can really deduct any points on, seeing as this is episode one. For all I know, that individual could be a key player in the coming acts. Despite this one odd occurrence, the story and background of Eliot in particular are quite well-done, but some of his early interactions feel a bit too forced. Said transient wanders into his diner, and Eliot immediately gives him money and some stern advice to get his life together. It’s an act of good intention that comes off far too friendly for a total stranger, especially considering Eliot’s circumstances. It does help flesh out his character in that he is one of the few honest people in an incredibly corrupt city. Not to say all characters seem so hollow, as we’re soon paired with Capone’s wise-cracking muscle, Milton, who has his own secrets, and an admitted aversion to helping Eliot in times of need.

Despite the aforementioned flaws of the game, A Crowd of Monsters has created a strong starting point for this episodic series. I for one am quite eager to see where Eliot’s story ends up leading and if you’re a fan of Noir fiction, or have a taste for the gritty, Blues and Bullets will definitely scratch that itch for you.

Developer: A Crowd of Monsters

Publisher: A Crowd of Monsters