I love a good dungeon crawler as much as the next guy, but something caught my eye at PAX East back in March: Guild of Dungeneering, a unique dungeon crawler based around cards that you are dealt. I managed to get some hands-on time with an early build that the developer, Gambrinous, had on display. Now the game is in full release on Steam and I have the full version to sink my teeth into. But will my quest for greatness be successful or be disappointing like an empty treasure chest?

Gameplay is based around a card system. When you start off in your home base where you will select a character who you want to send out into the world for fame and glory. Classes range from warriors, mages, thieves, and even mimes, each with various traits to suit your liking. You will also be able to equip them with a limited amount of items that you unlock in your shop with the gold you collect from adventuring. Although if an adventurer perishes, they are gone forever and show up in the Graveyard, where you can visit their virtual tombstones. Don’t worry though, because as soon as that character is defeated another of the same class pops up to replace them.

Once in the game exploring, you are dealt five cards which usually range from dungeon piece cards that you will use to build your surroundings, monster cards that you will place on dungeon cards that have already been placed, and treasure cards which will give you gold. Dungeons have set goals where you try to beat those goals to unlock other harder dungeons and better loot. Normally you are trying to build a path to, say, a boss or chests to complete objectives. Placing the monster and treasure cards is how you get your little adventurer to move around. You don’t have free control over him or her, and their actions are influenced by your card placement – they might greedily head towards gold, or run into combat when feeling bold. So you have to choose and place the cards carefully.

When your character ends up in a spot with a monster, the gameplay shifts to a battle mode, where you and the enemy are both dealt three “combat cards” per turn when fighting. You select one card to play, and the unused cards go back into the deck. Combat cards will be marked with swords for attacking power, shields to block incoming attacks, and magic blasts. For example, if you are attacked with a card with a sword on it, you need to play a card with a shield on it and/or another sword to make sure the enemy is also damaged in the same turn. Some cards will have both a sword and shield, plus there could be more than one on a single card. You need to think and trade blows carefully because your hero has only limited health in each battle. Health does come back to full after the battle which is a plus.

“I know with roguelikes there is a luck factor, but sometimes it felt this game relied on the ‘luck of the draw’ too much to my liking, leading to some rather unfair scenarios.”

Which combat cards you have in your deck depends on a few things. When you defeat an enemy, they drop loot, and each piece of loot is tied to a combat card, but you have to choose what to take – and you can only carry a certain number of cards. Now the downfall to this is that if you want to swap out loot you may have to give up cards to get new ones which could affect how you do in battle. The other thing you need to count on for getting good cards is luck and, well, my luck seems to be horrible at times. I’ve had characters get creamed almost as soon as they enter a dungeon because the cards I was getting had no chance of beating anything. I know with roguelikes there is a luck factor, but sometimes it felt this game relied on the ‘luck of the draw’ too much to my liking, leading to some rather unfair scenarios.

The art style of the game is best described as cute and have a hand-drawn style, almost like a newspaper comic strip. Characters are amusing with big eyes and clad in proper attire for their class. The same goes for all the enemies you encounter in the dungeons – rats, gnolls, zombies and other such baddies. The dungeon itself which you will be building from the cards you get dealt like I mentioned earlier are similarly drawn. All the cards you will be playing with are designed well and easy to read. The only thing missing from the overall look is color. There is a bit of color where your cards show off a bit of blue for your hero, enemy cards are red, treasure cards are appropriately gold in color. Enemies are highlighted in red and do give themselves a bit of a menacing look about them with it. However, overall the game is dominated by black and white. I really did not mind the look and I see what the developers were going for, but it did take some getting used to. I do wish there were more animations as things just seem a little stiff as your character slides around the map and during battles. 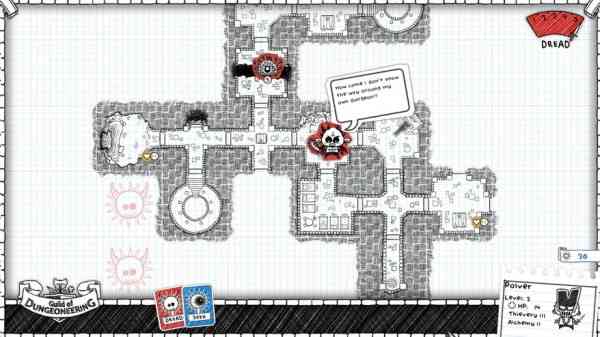 On the audio side of things the developers seemed to really have fun with the game’s music. It’s very playful and medieval in nature, which is a perfect fit for a game like this. A bard comes on now and then too, singing about your heroic exploits and how horribly you died. The rest of the sounds you can expect are your typical clashing and banging during combat as you play your cards. It all fits well and does not get boring or annoying, which can be a deal breaker for some games.

After the last card is played and the loot has been counted, Guild of Dungeoneering delivers a satisfying dungeon crawling roguelike card battling experience. While the game comes down to luck a little more than I would have liked which was frustrating, this dungeon crawler with a twist has a lot of redeeming qualities going for it.